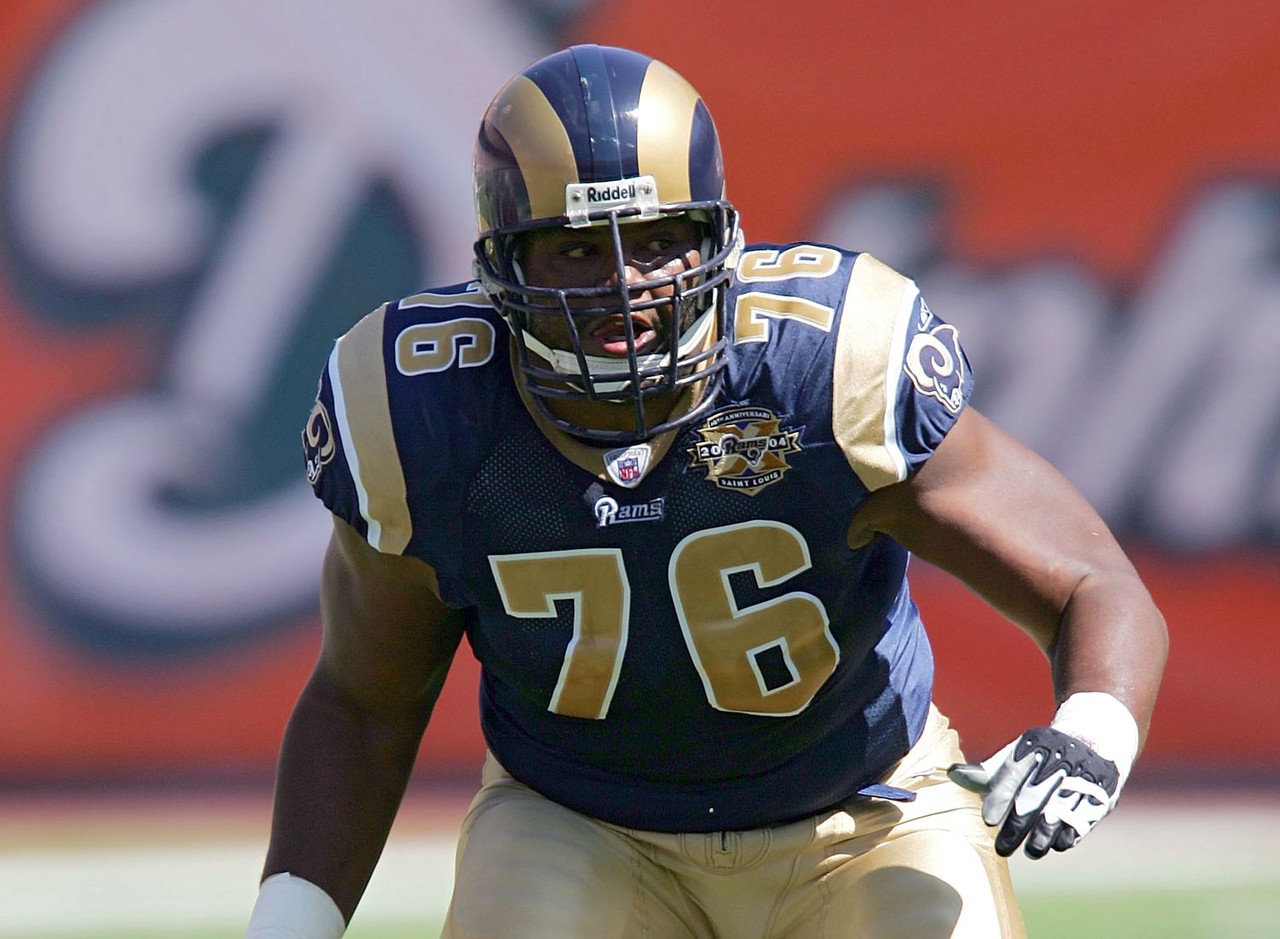 In football, a “pancake” is a type of block in which an offensive player hits a defensive player with enough force to knock him down, usually landing flat on his back.

Orlando Lamar Pace was known as The Pancake Man for the dominating way in which he blocked defenders.

Born in Sandusky, Ohio—an industrial town on the shores of Lake Erie in northern Ohio—on this date in 1975, he and his sister were raised by their mother, who worked at a pencil factory. Orlando played youth football in Sandusky and was put on the offensive line because of his enormous size, but did not like it, preferring instead to play quarterback or running back. He was a two-sport star at Sandusky High School-alma mater of Scott May, Olympic basketball gold medalist, college player of the year and MVP of Indiana University’s undefeated national championship team in 1976.

In his senior year, Pace averaged 18 points and led the Blue Streaks’ basketball team to a 22-3 record. He was named to the Parade All-America football team as an offensive lineman and the USA Today All-America team as a defensive lineman. Pace enrolled at Ohio State University in 1994 and became only the second true freshman ever to start for the Buckeyes in route to being named Big Ten Freshman of the Year. The following season, he helped create huge holes lanes for OSU running back Eddie George, who went on to win the 1995 Heisman Trophy. Pace earned the Lombardi Award as the best college lineman in 1995, becoming the first sophomore ever to receive that honor, and was named first team All-Big Ten as well as consensus All-America. As a junior, “The Pancake Man” became the first player ever to win the Lombardi Award twice while also earning the Outland Trophy as college football’s best interior lineman. No player in college football history has won both the Lombardi and Outland awards in the same season. Pace finished fourth in the voting for 1996 Heisman Trophy, becoming the first offensive lineman to finish in the Top Four since former Buckeye John Hicks in 1972. In addition, he was named All-Big Ten, All-America, Ohio State’s team MVP and was awarded the Chicago Tribune’s Silver Football as Most Valuable Player in the Big Ten. Following his junior season, the man that Sports Illustrated called “the best player in the country”, announced that he would forego his senior season and enter the NFL Draft.

The St. Louis Rams chose Orlando Pace with the number one pick in the 1997 NFL Draft, making him the first lineman since Ron Yary in 1968 to be selected first overall and the fourth offensive tackle in the 62 history of the draft to be selected first. The 6’7”, 325 left tackle had started every game in his three years at Ohio State and did not allow a single sack during his final two seasons in Columbus. Pace was quick, strong and extremely nimble—rare commodities in a player of his size—and, after a three-week holdout, was signed to the largest rookie contract in NFL history. He made his first start on September 28, 1997 and started every game for the rest of the season. The following year, he started 16 games and was named a Pro Bowl alternate. In 1999, he protected quarterback Kurt Warner so effectively that the Rams won the Super Bowl and Warner was named league MVP. The St. Louis Rams were known as the “Greatest Show on Turf” during this era, leading the NFL in total yards, passing yards and points scored for three straight seasons. In 2000, Orlando Pace played 1,006 out of 1,013 offensive snaps and was not flagged for holding once as the Rams set a league record for most passing yards. The following season, he played every snap and led the Rams to their second Super Bowl in three years before losing to second-year quarterback Tom Brady and the New England Patriots, 20-17. Mr. Pace was named to the Pro Bowl in each of the next four seasons before suffering a season-ending injury in the eighth game of 2006. He returned the following year but went down in the season opener and was lost for the entire 2007 campaign. Pace started in 14 games the following year and the Rams, who finished 2-14, released him after the season. He was signed by the Chicago Bears but was ineffective and retired following his release on March 1, 2010.

Orlando Pace played for 13 seasons, won a Super Bowl and was named to seven Pro Bowl teams. He started every game of the season eight different times and his Rams offenses threw for over 3,000 yards every year he was with the team. Pace blocked for three consecutive league MVPs [Kurt Warner in 1999 and 2000, Marshall Faulk in 2001] and is considered one of the finest offensive tackles ever to play professional football. In 1999, he was selected as a starter on Sports Illustrated’s “NCAA Football All-Century Team” and was elected into the Rose Bowl and College Football Halls of Fame in 2013. Mr. Pace received the Ed Block Courage Award, as voted on by his Rams teammates as a role model of inspiration, sportsmanship and courage, in 2008.

“Orlando Pace is not only the best offensive lineman I have ever coached, but he is the best I have ever seen. He was just a fantastic football player. He was the best”– John Cooper, former Ohio State Head Football Coach