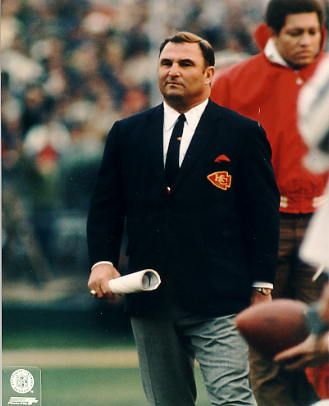 Hank Stram was the greatest coach in the history of the American Football League.

One of pro football’s most colorful, innovative and creative minds, Stram paced the sidelines – bedecked in a sport coat and tie with rolled up game plan clenched in his hand — for 17 professional seasons.  Gregarious and stocky, the dapper Stram was best known as head coach of the Dallas Texans/Kansas City Chiefs.  In 15 seasons with the franchise, Stram had only two losing campaigns.  He achieved an overall record of 124-76-10 [.614]. Stram’s 1962 Dallas Texans had a league-best winning percentage of .786 and two of his Kansas City teams posted winning percentages above .800.

The only coach to remain on the sideline for the entire ten-year history of the AFL, Stram won more games [87] and more championships [3] than any other coach in the league.  He also led the 1971 Kansas City Chiefs to an AFC Western Division title.  The only coach in AFL history to take his team to two Super Bowls, Stram coached in three AFL title games [winning them all] and the two longest games in pro football history.

Like Paul Brown and Sid Gillman, Hank Stram was an innovator.  His Offense of the 70s featured small, shifty scatbacks running behind a mammoth offensive line, making it difficult for defenses to find the ballcarrier. Stram created the moving pocket and double tight end formation.  His Power-I formation involved a tight end that lined up directly behind the quarterback, then shifted to the strong side before defenses could react. Stram was a mastermind at creating mismatches, forcing opponents to cover big, physical wide receivers like Otis Taylor with smaller cornerbacks.  And his Choir Huddle was simply beautiful.

Henry Stram changed the way football is played, while his style and class gave the AFL the recognition and respect it needed to survive.

Stram introduced the stack defense, with linebackers placed directly behind gargantuan tackles who occupied blockers allowing the ‘backers to fly to the football.  His schemes always placed a man head-up on the center, whether it was a 3-4 or 4-3 alignment.  Stram employed physical corners to play bump-and-run coverage.  Henry Stram brought Gatorade to pro football, and he created off-season mini-camps, now a staple of the NFL.

A pioneer in special teams play, Coach Stram used several of his hulking lineman – both defensive and offensive – to protect on field goals and extra point attempts, making kicks more difficult to block.  Stram was one of the first to employ a placekicking specialist.  He found Jan Stenerud, a Norwegian immigrant attending college on a ski scholarship, at Montana State.  Stenerud went on to become the first pure placekicker to land in the Hall of Fame.  “Anytime we get to midfield,” observed Stram, “we’re a threat to score three points.”  And Stram understood the importance of field position.  His punter, Jerrel “Thunderfoot” Wilson, was the best in AFL history.

Henry Louis Stram was born in Chicago January 3, 1923.  His Polish-born father, Henry Wilczek, abandoned the family name while wrestling for a circus.  Wilczek later became a tailor and salesman for an upscale clothing company, passing down to his son a life-long passion for sartorial splendor. The family moved to Gary, Indiana, where Stram lettered in football, baseball, basketball and track at Lew Wallace High School.  Despite his diminutive stature, the 5’7″, 135-pound halfback earned a football scholarship to Purdue University.

Stram started for the Boilermakers as a sophomore in 1942 and played well enough to be invited to the College All-Star Game but opted instead to serve in World War II.  Following the war, he returned to Purdue, graduating in 1948.  Stram remained in West Lafayette, serving as Purdue’s head baseball coach and assisting with the football team.  He recruited quarterback Len Dawson away from Woody Hayes and Ohio State, beginning a friendship that would last for more than half a century.

Stram served as offensive coordinator at Purdue for eight seasons.  After being passed over for the head coaching job after the 1955 season, he left for SMU.  Stram spent one season at SMU then served as an assistant at Notre Dame for two more.  He was working as an assistant at the University of Miami in 1959 when Lamar Hunt, who had been a reserve end at SMU in 1956, hired him as the first head coach of the Dallas Texans [the Texans moved to Kansas City in 1963 and were renamed the Chiefs] of the new American Football League.

The 37-year-old Stram was an immediate winner, capturing the 1962 AFL championship in only his third season [Dallas beat Houston in overtime, 20-17, to take the 1962 title.  It would remain pro football’s longest game until Christmas Day 1971, when Stram’s Chiefs would lose to Miami in the AFC divisional playoffs].  He guided the Chiefs to the 1966 AFL title and a date with the Green Bay Packers in the inaugural AFL-NFL World Championship Game [later renamed the Super Bowl by Lamar Hunt].  While the Chiefs lost to the Packers, 35-10, Stram would return to pro football’s biggest game three seasons later.

The apex of Hank Stram’s coaching career came in 1969.  Injures to Dawson and his backup, Jacky Lee, forced Stram to play third-stringer Mike Livingston for much of the season.  Led by a stout defense, the Chiefs qualified for the postseason as a wild card.  After coming through the playoff bracket the hard way, dethroning the defending world champion Jets in New York and then throttling the Raiders in Oakland, the Chiefs arrived at the Super Bowl in New Orleans to face the Minnesota Vikings. Installed as a two-touchdown underdog, K.C. was given little chance to win, then pounded the Vikings into submission.  Prior to the game, Stram agreed to wear a microphone for NFL Films.  The footage of his nervous pacing staccato delivery….”65 Toss Power Trap…I told you that thing was there, boys…just keep matriculating the ball down the field, boys!” became an instant classic, and helped usher pro football into the video age.

Hunt and Stram were both visionaries, creating the most successful franchise in AFL history.  From the beginning, the Texans/Chiefs recruited Black athletes, a practice frowned upon by the stodgy NFL.  One of the master architects of forming the Chiefs roster was Lloyd Wells, pro football’s first full-time African-American scout.  Wells scoured historically Black colleges and universities for talent, visiting schools like Grambling, Southern, Bishop, Prairie View and Morgan State.  Wells, who later landed in the AFL Hall of Fame, discovered and signed several of Stram’s best players, including Emmitt Thomas, Otis Taylor, Willie Lanier, Jim Kearney and Buck Buchanan.

Playing in a division that featured some of the greatest Oakland teams in Raiders history, Stram’s teams finished first or second in eight of ten AFL seasons.  The blazer-wearing, polka-loving dictator coached eight Pro Football Hall of Famers, and nine of his players were named to the AFL All-Time Team.  While considered an offensive genius, Stram’s defenses were the backbone of his teams.  In Super Bowl IV, the Chiefs defense forced five turnovers and limited the Vikings – who featured the NFL’s best offense — to a paltry 67 rushing yards.  Six of the eleven starters on that squad landed in the Hall of Fame and the linebacking corps of Bobby Bell, Willie Lanier and Jim Lynch was the best trio of that era.

“I’ve lived a charmed life,” said Stram, who was named 1968 AFL Coach of the Year.  “I married the only girl I ever loved and did the only job I ever loved.”

Following the 1975 season, Hunt made one of the most difficult decisions of his life and fired the greatest coach in Chiefs history.   The 52-year-old Stram landed in New Orleans, where he guided the lowly Saints for two seasons before retiring from coaching.  Stram then embarked upon a long and successful career as an NFL analyst, both on radio and television.  The former coach worked alongside legends such as Dick Stockton and Vin Scully but is best known for his work with Jack Buck calling Monday Night Football for CBS Radio.

The AFL All-Time Team was announced January 14, 1970, just three days after the Chiefs dismantled the Vikings in Super Bowl IV and forever validating the league.  In one of the great injustices in football history, Hank Stram was not named head coach of the All-Time Team.  Rather, that honor went to Weeb Eubank.  Although Eubank guided the Jets to the famous upset victory over the Baltimore Colts in Super Bowl III, his AFL coaching record pales in comparison to Stram’s.  In seven years with the Jets, Eubank had three winning seasons, but also finished last three times.  He won two division titles, went 2-1 in playoff games, and posted a winning percentage of .543.  Meanwhile, Stram went 5-2 in the postseason, won three league titles, and compiled a winning percentage of .644 in ten AFL seasons.

In 2003, Hank Stram received professional football’s highest honor when he was enshrined into the Pro Football Hall of Fame.  His presenter was Len Dawson, whom Stram had presented in 1987.  Suffering severely from diabetes, wheelchair-bound Coach Stram was assisted to the stage by his former quarterback, where a prerecorded acceptance speech was telecast to the audience.  Mr. Stram died of diabetes complications at St. Tammany Parish hospital outside New Orleans July 4, 2005.  He was 82.