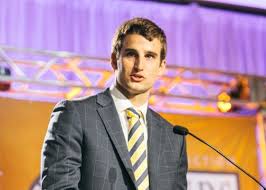 Austin Hatch is an uncommon man.  The University of Michigan junior has survived two planes crashes that killed his entire family: the first in 2003 and another eight years later.

Austin James Hatch was born in Fort Wayne, Indiana, on this date in 1994, as the second of three children.  His parents, Stephen and Julie Hatch, were high school sweethearts in Saginaw, Michigan, where Stephen was an All-State wide receiver and Julie was a cheerleader and Homecoming Queen.  After earning a medical degree in anesthesiology from the University of Michigan, the couple settled in Fort Wayne.  In 1976, Stephen’s father, Jim, built a home on Walloon Lake in northern Michigan, a five-hour drive from Fort Wayne.  It has been the family’s special place since.  They liked to get away to the lake house whenever possible, so Dr. Hatch learned to fly and bought a plane, making travel to and from the lake house much more convenient.

On Labor Day Sunday 2003, the family boarded the six passenger Beechcraft Bonanza in Charlevoix, Michigan, for the 50 minute flight home.  While in flight, the plane ran out of fuel and clipped a utility pole during an emergency landing near Uniondale, Indiana, killing Julie, 11-year-old Lindsey and 5-year-old Ian Hatch, who were all seated in the back.  Dr. Stephen Hatch survived, but was burned badly after rescuing eight-year-old Austin, who had been sitting in the jump seat across from his dad, from the fiery wreckage.

Stephen and Austin Hatch had always been close, but recovering from the pain of losing three family members created a special bond.  Austin, who was an honor student, considered his father his idol, best friend, and role model.  The two were inseparable.  Austin returned to Canterbury School [rated the best private school in Indiana in a 2014 survey], where he was a scratch golfer and basketball player.  As a sophomore, the 6’6” guard attracted the interest of several Division I colleges.  After visiting Fort Wayne and watching Hatch score 30 points and haul in 16 rebounds in a game against cross-town rival Bishop Luers, Michigan coach John Beilein offered the tenth-grader a scholarship to his parents’ alma mater.  “It was a very special moment for me,” recalled Hatch.  “There was no reason to wait.  I couldn’t turn it down.”  Nine days after committing to Michigan and fulfilling a life-long dream, 16-year-old Austin Hatch’s world changed forever.

Aviation experts say that the odds of a person winning the lottery are greater than being in two plane crashes, but that is what happened to Austin Hatch. Eight years after surviving a plane crash that took his mother and two siblings, Austin Hatch became an orphan.  Stephen Hatch had married Kimberly Neal, an active volunteer in the community and single parent of three, in 2005.  Kim had just returned from assisting tornado survivors in Joplin, Missouri, when she, Stephen and Austin took off for the lake house on a Friday night.  At approximately 7:30 pm on June 24, 2011, Stephen Hatch missed his landing approach to the runway at Charlevoix Municipal Airport, crashing his single engine Beechcraft A36 Bonanza into a nearby garage.  Dr. Hatch, 48, and Kim, 44, were killed instantly, while Austin was critically injured.  Suffering from a broken rib and punctured lung, Austin was airlifted to a hospital in Traverse City, where he was diagnosed with a diffuse axonal injury [severe head trauma caused by the movement of the brain inside the scull].  Ninety percent of survivors never regain consciousness.  The other ten percent are often severely impaired.  He spent two months in a medically-induced coma before being airlifted to the Rehabilitation Institute of Chicago, the top rehab facility in the country.

Hatch had to relearn how to walk, talk, bathe and dress.  Two months after he arrived at RIC, his uncle handed him a basketball.  Having lost 50 pounds from his 215-pound frame, he lacked the strength to lift the ball over his head.  In October 2011, Hatch returned to Fort Wayne, where he moved in with Kim’s daughter Maria.  He returned to Canterbury in fall 2012.  The following year, his extended family decided he should move to California to live with an uncle and finish his senior year at Loyola High School, a Catholic school in Los Angeles.  He began training with Rasheed Hazzard, former NBA player and son of UCLA great Walt Hazzard, most mornings at five.  Hatch made the Loyola varsity and, in a game against Sherman Oaks Notre Dame in January 2014, caused pandemonium in the gym after swishing a three-pointer.

John Beilein and the University of Michigan honored their scholarship offer and Austin Hatch arrived in Ann Arbor in autumn 2014.  Once an honors student who barely had to crack a book, he worked with tutors to handle his academics.  On the court, he could shoot and dribble but was incapable of stringing it all together in real time at the speed of Division I basketball.  Wearing the Maize and Blue of his parents’ alma mater, he played five minutes spread over five games his freshman season, scoring one point on a free throw on November 10.  In April 2015, Hatch, who defines courage as “the push to achieve goals in the face of insurmountable obstacles, done in a way that others can respect and admire,” received the “Most Courageous Award” from the Basketball Writers’ Association during the Final Four.  Later that month, he announced that he was accepting a medical scholarship and closed his playing career to become an undergraduate student assistant with the UM basketball program.  “Basketball has always been a huge part of my life,” said Hatch.  “However, it is what I play and not who I am.”  Coach Beilein said the decision, “Allows Austin to devote the necessary time he needs to be successful in his studies and obtain a Michigan degree.”

“I can hear their voices in my head when I face a difficult situation.  My dad and mom raised me to be an uncommon man.  The uncommon man gets up at five in the morning to work out.  It takes an uncommon man to do that when no one else is looking.”  –  Austin Hatch