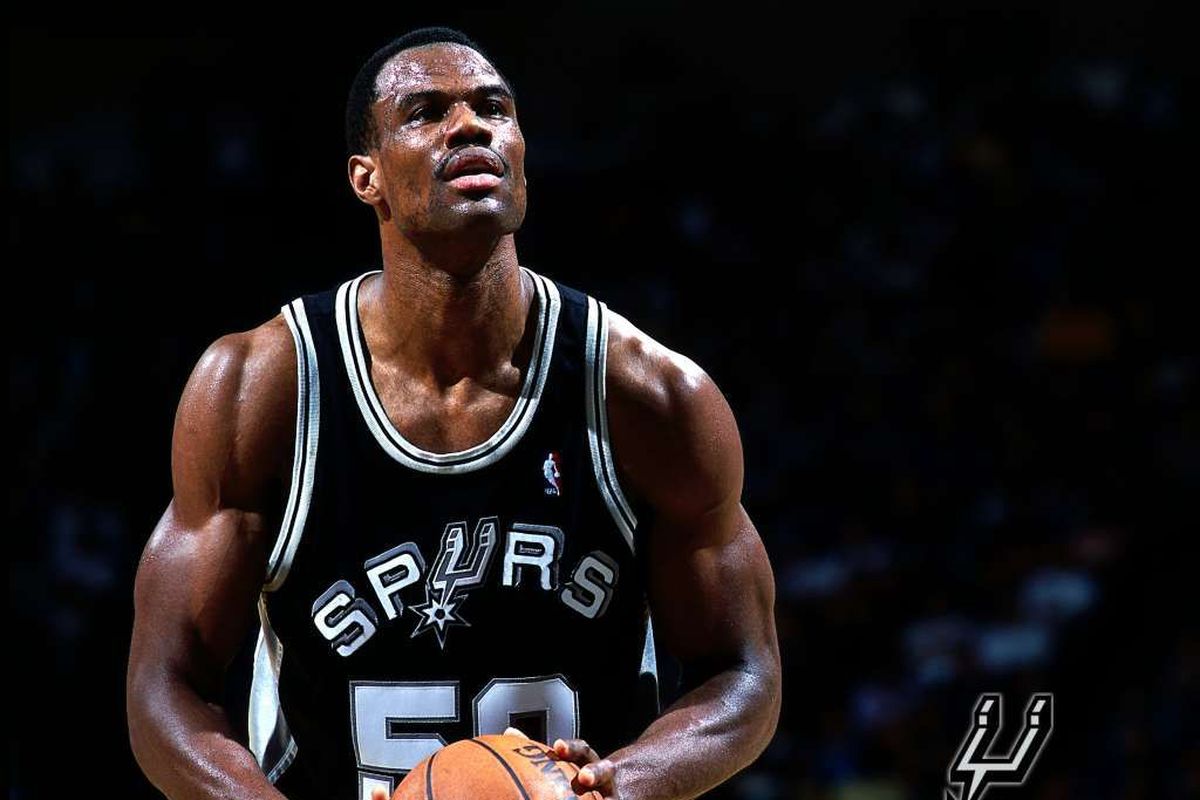 David Robinson is the only player in NBA history to lead the league in scoring, rebounding and blocked shots and win awards for Rookie of the Year, Most Valuable Player, and Defensive Player of the Year.

“The Admiral” won three Olympic medals with Team USA and two NBA titles during his 14-year hall-of-fame career.  He was 1987 College Player of the Year at the U.S. Naval Academy and, after serving two years in the Navy, joined the NBA, where he was named 1990 Rookie of the Year.  In 1991, Robinson led the league in rebounding.  The following season, he was named Defensive Player of the Year.  Robinson was the 1994 NBA scoring champ and league MVP one year later.  Lean, muscular, and agile, The Admiral was one of the most complete—and humble–players in basketball history.  Robinson and Kareem Abdul-Jabbar are the only two players in NBA history to lead the league in scoring, rebounding, and blocked shots during their careers.  He is the second player—behind the great Michael Jordan—to win Rookie of the Year, MVP, and Defensive Player of the Year honors during his career.

David Maurice is the second of Ambrose and Freda Robison’s two children.  Born in Key West, Florida, August 8, 1965, his father was in the Navy and the family moved often.  Following his retirement from the Navy, Ambrose moved the family to the Washington, D.C. area, where he worked as an engineer.  Ambrose Robinson emphasized education, insisting his children study a new dictionary page every night after school, and David excelled academically.  He attended Osbourn Park High School in suburban Manassas, Virginia, and was good at most sports–except basketball.  Robinson had grown to 6’6” by his 12th grade year.  Despite having never played organized basketball or attended any camps, he decided to join the varsity team as a senior and earned all-area and all-district honors.  He generated little interest from college recruiters and, after scoring 1320 on the SAT, chose to attend the United States Naval Academy.

David Robinson—whose father and grandfather served in the military—was 6’8” when he was admitted to the Naval Academy, two inches above the height limit.  After being granted a waiver from the Superintendent of the Academy, he made an immediate impact on the basketball floor.  As a sophomore, Robinson averaged over 23 points and was named Colonial  Athletic Conference Player of the Year.  In his second-class [junior in Navy parlance:  A senior is a “first-class”] year, he led the nation in rebounding, averaged nearly six blocked shots a game to set a new Division I record, and ended the season with the most blocks [207] in college history.  The greatest player in Navy history led the Midshipmen to the best finish in school history in 1986, when they reached the Elite Eight of the NCAA tournament.  Robinson was again named conference player of the year as well as All-American.

Robinson was dominant in his final year in Annapolis, earning his third straight Colonial Player of the Year and capping off his first-class season by being named unanimous All-American and College Player of the Year.

Robison had grown to seven feet tall during his time at the Naval Academy, making it difficult for him to serve time at sea on a ship or submarine.  Upon graduation, most naval academy grads serve a minimum of five years’ military service.  In Robinson’s case, Secretary of the Navy, John Lehman compromised, and commissioned him as a staff officer in the Civil Engineering Corps with an active duty obligation of two years.  In spring 1987, Ensign Robinson reported to the naval base in Kings Bay, Georgia, and began serving his country aboard the USS Buffalo.  Although he was nicknamed “The Admiral,” Robinson’s actual naval rank was Lieutenant, Junior Grade.

Despite knowing Robinson’s Navy commitment required him to miss two seasons, the San Antonio Spurs selected the 7-foot center with the first pick of the 1987 NBA draft, four spots ahead of future Dream Team [Daily Dose, 9/21/15] teammate Scottie Pippen.  Robinson stayed fit during his time in Georgia, and was a forced to be reckoned with upon joining the Spurs in 1989.  In his first six years in the league, The Admiral won Rookie of the Year, MVP, Defensive Player of the Year, and was named to the All-Star team each season.  Tim Duncan [Daily Dose, 6/28/16] joined the Spurs in 1997.  He and Robinson—dubbed the “Twin Towers”—formed a dominant frontcourt and led the Spurs to their first NBA title in 1999.

The Spurs reached the NBA Finals again in 2003, where they faced the New Jersey Nets in a showdown of two former ABA [Daily Dose, 5/13/16] franchises.  In his last season and nearing his 38th birthday, Robinson was magnificent in the Finals.  In Game 6, the Twin Towers combined for more rebounds than the entire Nets team.  Turning back the clock, Robinson scored 13 points and grabbed 17 rebounds in his final game, an 88-77 Spurs victory that delivered a second NBA title to San Antonio.  At the end of the year, he and Duncan—who had been regular-season and NBA Finals MVP—shared Sports Illustrated’s 2003 Sportsman of the Year award.

In 14 NBA seasons, David Maurice Robinson averaged over 21 points and ten rebounds per game.  He scored 40 or more points 22 times—including 71 against the L.A. Clippers in April 1994.  Fast and strong, Robinson was a dominant defender. He made the All-Defensive team eight times and collected double-digit blocks ten times in his NBA career.  Robinson played on three Olympic teams, collecting two gold and one bronze medal, and is a member of the NBA’s 50th Anniversary All-Time Team.  The Spurs retired his number 50, and he was twice inducted into the Naismith Basketball Hall of Fame: individually in 2008 and, one year later, as part of the ’92 Olympic Dream Team.

On this date in 1986, Second-Class center David Robinson blocked an NCAA record 14 shots in a 76-61 win over UNC-Wilmington.