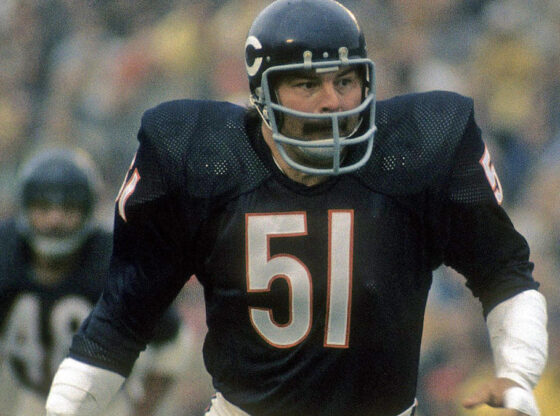 Dick Butkus was the most feared tackler ever to strap on a football helmet. No athlete in any sport has more embodied his town and his team than Dick Butkus and the Chicago Bears.  Like the City of Broad Shoulders and their beloved Monsters of the Midway, Butkus was rough and tumble to the core.  A savage in cleats, Butkus was an animal.  In a career cut short by injuries, he led the Bears in tackles in each of his eight full seasons.  Possessing a desire to excel that few have ever equaled, Butkus had only one goal – to be the best. The gold standard by which middle linebackers are measured, Butkus lived for contact.  The most dominant defensive player of his generation, he played in eight Pro Bowls in nine NFL seasons.  Playing in the era of Ray Nitschke, Tommy Nobis, Sam Huff and Mike Curtis, Butkus was named First-Team All-Pro six times.  Named to the NFL’s 75thAnniversary All-Time Team nearly two decades after he retired, Butkus is the greatest middle linebacker in pro football history.

“If I had a choice,” said former Green Bay Packers running back MacArthur Lane, “I’d sooner go one-on-one with a grizzly bear.”

It is fitting that Dick Butkus played for the Bears.  The meanest, nastiest and fiercest linebacker ever to step onto a field, he didn’t just tackle ballcarriers, he mauled them.  At 6’3”, 245, Butkus was a large linebacker for his day.  Yet he had the quickness to roam sideline to sideline and the speed to cover tight ends and running backs in the passing game. Like a bear after honey, Butkus had a nose for the football.  As a rookie, he set a team record with six fumble recoveries and retired as the NFL’s all-time leader in that category, with 27.  Butkus glamorized the middle linebacker position.  He played angry, often manufacturing things to make him mad, believing it gave him a competitive advantage.  “Tackling wasn’t good enough,” recalled former Bears teammate Ed O’Bradovich.  “Just to hit people wasn’t good enough.  He loved to crush people.” Born and raised in Chicago, Butkus played his entire career in Illinois.  An All-State fullback and linebacker at Vocational High School, he is the first junior ever to be named Chicago High School Player of the Year.  At the University of Illinois, Butkus was a bruising center.  But it was at linebacker where his legend was born.  As a junior, Butkus made 145 tackles and caused ten fumbles while leading Illinois to the Big Ten championship, a No. 3 ranking and a 17-7 victory over Washington in the 1964 Rose Bowl.  It was the last time the Illini won the Rose. Though injured for much of his senior season, Butkus was awarded the Silver Football as 1964 Big Ten MVP and was named consensus First Team All-America for the second year in a row. Famous for his ability to strip the ball, Butkus probably caused more fumbles than any player in history, but that statistic was not tracked in his day.  Combining instinct, strength, leadership, and rage, he played with thinly-veiled violence.  He snarled at opponents and was renowned for his intimidating style.  His relentless pursuit and ferocious tackling struck fear in the hearts of his opponents.  “I wouldn’t ever go out to hurt anybody deliberately,” quipped Butkus.  “Unless it was important – like a league game or something.”

“Dick Butkus is a special kind of brute whose particular talent is mashing runners into curious shapes,” wrote Sports Illustrated in 1964

Born December 9, 1942, Richard Marvin Butkus was one of nine children born to blue-collar Lithuanian immigrant parents on Chicago’s South Side.  His father, who spoke broken English, worked as an electrician for the railroad and his mother worked 50 hours a week at a laundry.  After finishing third in 1964 Heisman Trophy voting, Butkus was the third overall pick of the Bears in the 1965 NFL draft.  It was the richest draft in franchise history, as Chicago took Gale Sayers with the fourth overall selection. Bill George had been the Bears middle linebacker for 13 years and was on his way to the Hall of Fame when Butkus reported to training camp as a rookie.  “The second I saw him on the field I knew my playing days were over,” recalled George.  “Nobody ever looked that good before or since.”  In Butkus’ first year, the Bears defense allowed 104 fewer points than it had surrendered the previous season. In September 1965, Butkus made 11 tackles in a sparkling rookie debut.  He went on to lead the Bears in tackles, fumble recoveries and interceptions before losing Rookie of the Year honors to Sayers, who’d scored an NFL-record 22 touchdowns.  In his first season, Butkus instantly became the heart and soul of the Monsters of the Midway defense, earning the first of eight straight Pro Bowl selections. A two-time NFL Defensive Player of the Year, Dick Butkus was a Great White Shark in a goldfish bowl.  He recorded a career-high 18 sacks in 1967.  Three years later, he appeared on the cover of Sports Illustrated ‘s pro football issue under the banner, Dick Butkus of the Bears: The Most Feared Man in the Game. Butkus underwent surgery on his right knee prior to the 1971 season and was not the same player afterward.  Playing in extreme pain and with a noticeable limp, he still managed to lead the Bears in tackles and interceptions in 1971.  The Maestro of Mayhem was selected to the Pro Bowl and was voted First Team All-Pro for the final time in 1972.  Midway through his ninth NFL season – severely hobbled and unable to continue playing on an irreparably-damaged knee —  Butkus was forced to retire.

“Dick was a well-conditioned animal,” said Hall of Famer Deacon Jones, one of the most feared defensive ends in NFL history.  “Every time he hit you, he tried to put you in the cemetery, not the hospital.”

Dick Butkus started all 119 games he played as a Chicago Bear, recording 1,020 tackles, 22 interceptions and recovering 27 fumbles.  A 1983 inductee into the College Football Hall of Fame, The Animal was voted into the Pro Football Hall of Fame in 1979.  On Halloween night 1994, the Bears retired the numbers of Butkus and Sayers at halftime of a Monday night game against the Packers.  In 2019, Mr. Butkus was ranked behind only Walter Payton in the Chicago Tribune’s list of the Bears top 100 players ever.  Like Sayers, who played only four full seasons due to injuries, Butkus left the game far too soon. Richard Marvin Butkus is generally considered one of the ten best players in NFL history.  He once ran out of his way to trample Fran Tarkenton on his way to the end zone after intercepting the weaselly quarterback near the goal line.  A robot of destruction, the ferocious middle ‘backer played every game as if it were his last.  Rocky Balboa named his dog after Butkus, who was rougher than a pine cone toilet seat. Since 1985, the Butkus Award has been given annually to the most outstanding linebacker in America at the high school, college and professional levels as chosen by a nationwide panel of 51 coaches and sportswriters.  Mr. Butkus, who celebrated his 77th birthday three weeks ago, was voted to the NFL’s All-Decade Teams of both the 1960s and 1970s.  He and the great Bob Lilly are the only two players to hold that distinction.