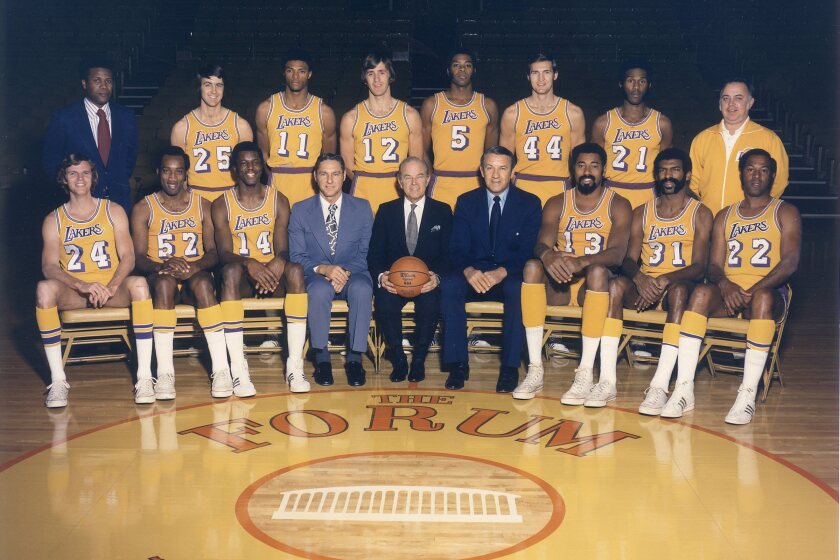 The Lakers moved from Minneapolis to Los Angeles prior to the 1960 season, the same year they drafted Jerry West. The Boston Celtics were the dominant team of that era, winning 11 of 13 NBA championships between 1957 and 1969, and the Lakers were usually their nemesis. Prior to the 1971-72 season, Los Angeles had played in seven of the previous ten NBA Finals, losing six to Boston and one to the New York Knicks. The aging Celtics were past their prime, the Knicks had won the championship in the 1969-70 season and the Milwaukee Bucks, led by superstar Kareem Abdul-Jabbar, had eliminated the Lakers in the Western Conference finals in route to the NBA title the previous year. L.A. hired Bill Sharman, who had played and coached for the Celtics, to replace Jim Mullaney prior to the ’71 campaign. Sharman, who invented the game-day shoot around that is commonplace in basketball today, introduced strict conditioning and a fast-break based offense. In addition, Sharman shifted Wilt Chamberlain’s game toward defense, rebounding and starting the up-tempo offense with quick outlet passes. West was coming off a knee injury that had ended his 1970-71 season prematurely and 37 year old Elgin Baylor’s aging knees could not withstand the pounding of fast-break basketball—forcing his retirement nine games into the campaign. Baylor, who was the third leading scorer and fourth leading rebounder in NBA history, was replaced at forward by Jim McMillian. West’s backcourt mate was Gail Goodrich, who had starred for legendary coach John Wooden’ s [Daily Dose, October 14] first two NCAA title teams in the mid-60s. Harold “Happy” Hairston played forward opposite McMillian to round out the starting five.

The season began October 15, 1971 with a blowout win over the Detroit Pistons. The Lakers won their next three then lost three of their next five—including a 109-105 loss to Golden State on Halloween—and entered the month of November with a record of 6-3. From there, the team came together in magical fashion, winning all 17 of their next home games and 16 on the road. On Friday, December 10, Los Angeles needed overtime to beat the visiting Phoenix Suns, 126-117, to notch their 20th straight win and tie the record set by the Bucks the previous season. Two days later, L.A. disposed of the Atlanta Hawks to set a new mark at 21. The Los Angeles Lakers did not lose a game for over two months, collecting an unblemished record in November and December. The streak ended on January 7, 1972 in a Sunday morning game in Milwaukee, when the defending champion Bucks handed the visitors their first loss in the past 34 games. The streak was over and the Lakers stood at 39-4 on the season. Los Angeles went on to finish the year 69-13 which was the best record in NBA history at the time [the 1995-96 Chicago Bulls won 72 games]. L.A. swept the Bulls in the first round of the playoffs, then knocked off Abdul-Jabbar and the Bucks in six games to face the Knicks in the Finals. New York took the first game in the Los Angeles Forum behind 29 points from Bill Bradley [Daily Dose, July 28] and 26 from Jerry Lucas. The Lakers then reeled off four straight wins, including a 116-111 overtime thriller at Madison Square Garden to earn their first championship since moving to Los Angeles.

There were 17 teams in the NBA in 1971-72. Today there are 29, meaning rosters are not as rich in talent. Teams today travel on private charters and rarely play three games in three nights. The 1971-72 Lakers played back-to-back-to-back games on four occasions, travelled on commercial airlines and washed their own uniforms. The team only lost two games in a row three times over the course of 82 regular season and 15 playoff games. In 1971-72, the Golden State Warriors were 51-31 and finished in second place in the Pacific Division. The Lakers beat them 162-99 and set a league record for largest margin of victory—a record that stood for nearly 30 years. The team averaged 121 points at a time when there was no three-point shot in the NBA, they outscored their opponents by over 1,000 points and their average margin of victory was a whopping 12.3 points per game. Thirty-Five year old Wilt Chamberlain averaged 19.2 rebounds per game, was named to the All-NBA Defensive First Team and led the league in shooting percentage. Jerry West was All-NBA First Team both offensively and defensively while teaming with Goodrich to average a combined 51.7 points, 14.2 assists and 7.8 rebounds each night. Bill Sharman was named NBA Coach of the Year.

On this date in 1971, the Los Angeles Lakers defeated the Baltimore Bullets, 110-106, at the Forum in Los Angeles, for the first of 33 straight wins.

“Forget personalities. We had a lot of different ones. But when you watched this team on the floor, it was like one mind thinking alike”– Jerry West