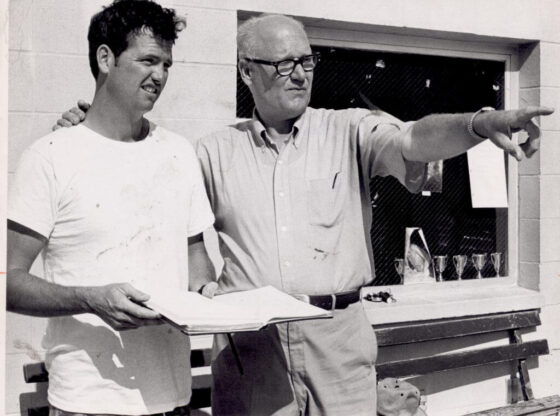 Legendary swim coach James Counsilman is the most respected teacher and innovator in his sport’s history.  Swimmers and coaches eager to learn his methods clung to his every word while continually inquiring, “What’s Up, Doc?”

Counsilman coached swimming at Indiana University from 1957 to 1990.  In 33 years, he won 23 Big Ten titles, six consecutive NCAA championships, and 12 AAU crowns.  Counsilman trained over 60 Olympians, including the great Mark Spitz [Daily Dose, 9/4/15].  He coached the two greatest teams in men’s Olympic swimming history–in 1964 and 1976.  In Montreal, the 1976 squad won 12 of a possible 13 gold medals and brought home two-thirds of all swimming medals.  Coach Counsilman invented the large deck-side pace clock.  He developed the bio-kinetic swim bench, which revolutionized dry land training, pioneered underwater filming to observe stroke mechanics, and was the first swim coach to implement interval training, which had been commonplace in track and field [Daily Dose, 6/13/16].  His pivotal book, The Science of Swimming, was released in 1968 and became the bible of coaching and swimming techniques worldwide.  His record at Indiana was 286-31-1 and, at one time or another, Counsilman’s swimmers set world records in every men’s event, a feat that has never been equaled.

James Edward was the younger of Joseph—a circus barker–and Ottilia Counsilman’s two boys.  Born in Birmingham, Alabama, on this date in 1920, his parents split when he was two and James and his brother Joe moved with their mother to her home town of St. Louis.  A good athlete, Counsilman competed in swimming and track & field in high school.  He had a poor self-image and, after graduating 113th in a high school class of 116 at Blewett High School in 1937, lacked direction.  The following year, young James met Ernie Vornbrock, a swim coach at the St. Louis Downtown YMCA, who became the biggest influence in his life.  Vornbrook trained and mentored Counsilman before introducing him to Ohio State swimming coach Mike Peppe at the 1938 national championships in St. Louis.  Counsilman enrolled at Ohio State, where he set an AAU record in the 200-yard breastroke in 1942.  His swim career was interrupted by World War II, when he piloted B-24s for the Army Air Corps.  Counsilman completed 32 missions and was awarded the Distinguished Flying Cross after successfully crash-landing his plane in Yugoslavia after being hit during a bombing mission in January 1945.  Every member of his ten- man crew returned safely.  Counsilman returned to captain the OSU swim team and won the 1946 Big Ten title in the 200-yard breastroke.  At the NCAA championships later that year, he finished second to Charles Keating in the same event.

Counsilman coached swimming at the University of Illinois while earning a Master’s Degree before moving to the University of Iowa to complete his doctorate in Physiology.  He coached his first Olympian at Iowa, Walter Ris, who won gold in the 100 M freestyle at the 1948 London Games.  Counsilman also became known as “Doc,” a name that followed him to Cortland State in New York, where he served as a professor and swim coach.

Doc Counsilman moved to Bloomington, Indiana, in 1957 to become assistant swim coach at Indiana University.  He also coached swimmers at the Indianapolis Athletic Club [Daily Dose, 1/20/16].  In 1958, he was named head coach at IU, which had a mediocre swim and dive program.  Counsilman immediately hired Hobey Billingsley, his former teammate and NCAA diving champion at Ohio State, to coach diving [Daily Dose, 7/4/16].  IU’s football team was placed on probation in 1960, prohibiting any school teams from competing in NCAA championships, but Doc pushed on.  With a program initially built around IAC swimmers, Indiana won its first Big Ten swimming title in 1961—the first of 20 straight conference championships the Hoosiers claimed from 1961 to 1980.  Counsilman implemented a credo of “hurt, pain, and agony,” inspiring his swimmers to ignore barriers and overcome challenges to achieve extraordinary accomplishments.  Using ritual, ceremony, positive thinking, and tradition, Doc molded his swimmers into tough, enthusiastic, and successful teams.  Indiana was so dominant that, at the 1964 Olympic Trials, seven of eight finalists in the 200 M breaststroke were from IU.  The Hoosiers had so much depth and talent that, based on times, they could have beaten the rest of the world in a dual meet.  In 1968, Indiana won the first of six consecutive NCAA titles.

Don Watson, who swam for Counsilman at Iowa and later assisted him at Indiana, became head coach at Hinsdale Central High School, near Chicago, in 1963.  Watson turned Central into a swimming powerhouse, winning 12 consecutive state titles beginning in 1967. He created a pipeline of Red Devil swimmers who headed to Bloomington, including 1970 Sullivan Award [Daily Dose, 11/18/16] winner and two-time Olympian John Kinsella.  Like John Wooden at UCLA, Counsilman built a program that attracted the best swimmers in America, including Gary Hall, Mike Troy, Jim Montgomery and Charlie Hickcox.  Following a disappointing performance in the 1968 Olympics, much-heralded Mark Spitz opted to attend Indiana to swim for Doc, calling it “the biggest decision of my life, and the best.”  At the 1972 Munich Games, Spitz famously won seven gold medals in seven events—all in world-record time.  After the Olympics, the swimming world thought everyone should emulate Mark Spitz—all but his coach.  While Counsilman admitted Spitz was the best swimmer in the world and his stroke was extremely effective, he stated “Mark is not the perfect swimmer and it is a mistake to attempt to make everyone swim like Mark Spitz.  Rather, the qualities and techniques that can be identified in Mark’s swimming can be applied to other athletes with different body types and different sets of natural skills.”

Counsilman was a motivator.  After a month of brutal training, Joe Hunsaker was discouraged after finishing a time trial with no improvement.  After expressing his frustrations to Coach Counsilman for several minutes, Doc simply asked, “Well, what are you going to do about it?”  Doc ran annual swim stroke clinics for over 20 years, providing over 18,000 kids with expert instruction.  He preached the importance of a positive approach to teaching, believing it far more important to “praise the good points of a youngster’s stroke than criticize.”  He was a scientist, demonstrating how the laws of physics govern stroke mechanics, and pioneered the two-beat crossover crawl [freestyle] kick, which became the standard for distance swimming.  Counsilman was a visionary.  He freely shared his knowledge with coaches, including East Germans, Soviets and Australians, in order to, “improve competition overall, and lower the times of everyone.  That will encourage coaches and athletes everywhere to respond with even more effective and innovative efforts.”

Once each season, every Indiana swimmer was timed for 800 meters using his best stroke.  A pound of jelly beans was awarded to every swimmer who met his goal time.  “Jelly Bean Day” became an IU tradition, and spectators filled the stands at Royer Pool to watch the competition.  Counsilman sought to “develop a state of mind that concerns itself with everyone on the team.  Then you will have more than your fair share of champions, and fewer champions will have a distorted view of their own importance.”  Coach Counsilman implored his athletes to live their lives with the same dedication they gave to training and competition.

James Edward Counsilman is the greatest coach, scientist and innovator the sport of swimming has ever known.  His life’s work left an indelible mark on the sport.  A university professor, Doc wrote several books and published hundreds of articles on swimming science.  In 1975, Mr. Counsilman was diagnosed with Parkinson’s Disease.  Four years later, he swam the English Channel becoming, at 58, the oldest man to successfully complete the swim.  In 1991, Doc retired as men’s swimming coach.  Shortly thereafter,  Indiana University dedicated the Counsilman Billingsley Aquatic Center to the coaching duo that built the IU dynasty.  Coach Counsilman was inducted into the International Swimming Hall of Fame in 1976 and the Indiana University Athletics Hall of Fame in 2001.  Mr. Counsilman died in Bloomington January 4, 2004, after his long battle with Parkinson’s Disease.