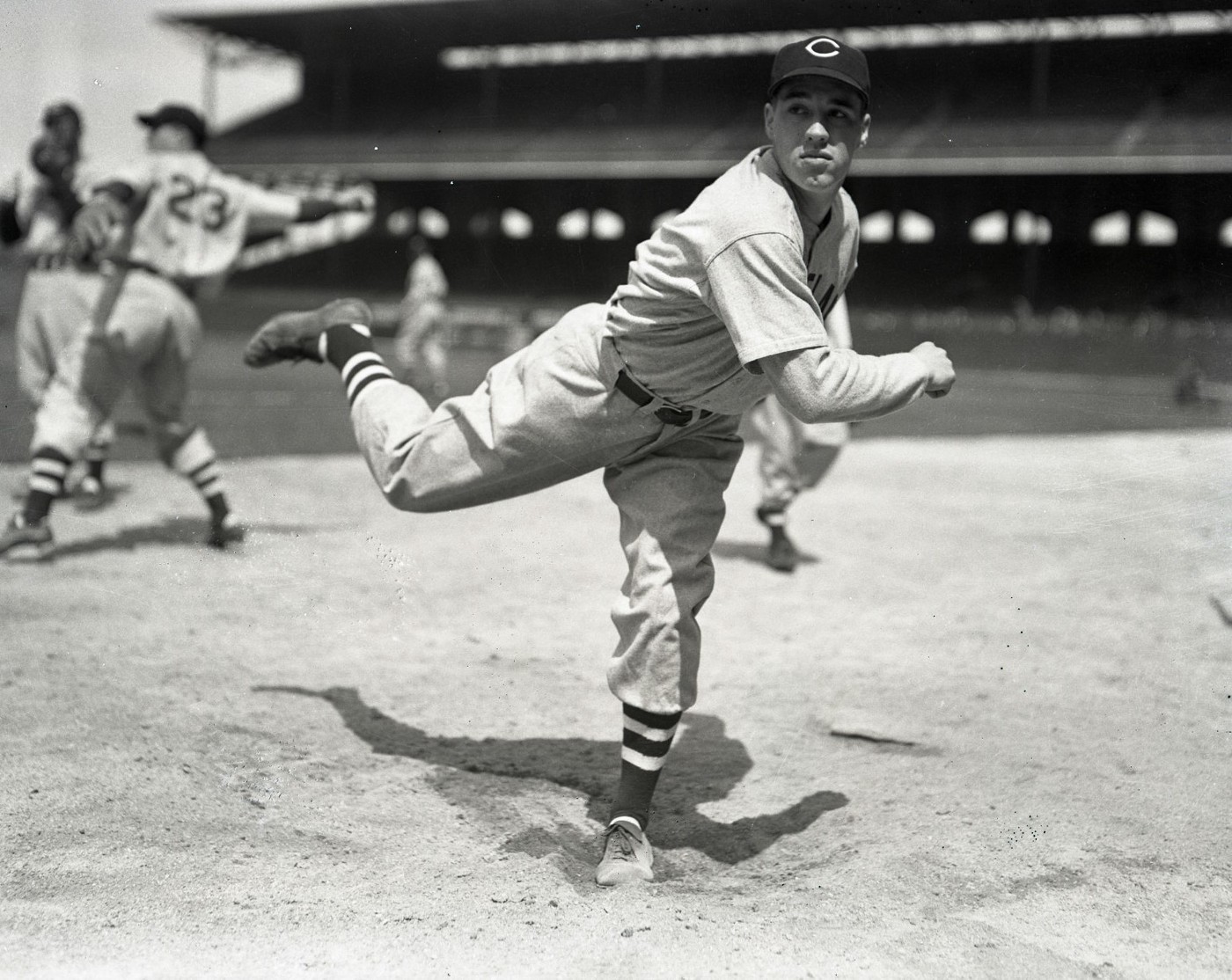 Born in Van Meter, Iowa on this date in 1918, Feller and his sister were raised on a 360-acre farm along the Raccoon River, near the center of the state. He played catch daily with his father, William, and learned how to throw a curveball by the time he was eight years old. By nine, Feller could throw a ball 270 feet. William Feller began growing wheat—a less labor intensive crop than corn—in order to allow his son more time to play baseball and the boy began to play American Legion Baseball at age 10. At 15, he shifted his focus from playing shortstop and outfield to pitching, with future College Football Hall of Famer and 1939 Heisman Trophy winner, Nile Kinnick, serving as his catcher. Feller pitched for Van Meter High School’s baseball team and was the starting center for the basketball team before signing with the Cleveland Indians at 16. A year later, he struck out eight St. Louis Cardinals during a three-inning stint of an exhibition game. That earned him a spot on the Indians’ major league roster at the age of 17. Feller got his first start in August of 1936 and struck out 15 in a 4-1 victory over the St. Louis Browns. One month later, he set an American League record by striking out 17 in a win over the Philadelphia A’s, becoming the only player in Major League history to strike out the same number of opponents as his age. “I was sure of one thing: When I went back to school in September and the teacher asked how we spent our summer vacations, I was going to have the best answer in the whole school”, he wrote in 1990. As the 1937 season began, Feller appeared on the April 19 cover of Time magazine. One month later, his graduation from Van Meter High School was covered nationally by NBC Radio.

In October of 1938, “Rapid Robert” struck out 18 Detroit Tigers to set a new Major League single game strikeout record. That season, he led the league in strikeouts–which he did seven times during his 18 year MLB career–and also led the AL in walks. The following year, the 20-year-old Feller led the American League in wins [24], complete games [24], innings pitched [296.2] and strikeouts [142]. On April 16, 1940, Feller pitched the only Opening Day complete game no-hitter in Major League history against the Chicago White Sox. He went on to win a career-high 27 games and win the pitching triple crown, leading the AL in wins, ERA and strikeouts. Feller dominated again in 1941, leading the majors in wins [25], strikeouts [260] and walks [194]. Later that year, he made a heroic choice by volunteering for the United States Navy.

Bob Feller had 3-C Draft Deferment Status when he enlisted on December 9, 1941—two days after the bombing of Pearl Harbor—becoming the first American professional athlete to enlist. He later said, “It was important to serve your country. I didn’t worry about losing my baseball career. We needed to win a war. I wanted to do my part.” Feller became an anti-aircraft gunner aboard the USS Alabama and served from 1941-1945. He was discharged with six campaign ribbons and eight battle stars and returned to Cleveland on August 24, 1945, where he was honored at a civic luncheon, telling the crowd, “The real heroes didn’t come home,” before taking the mound and allowing four hits in a 4-2 win over the Detroit Tigers. “Bullet Bob” recorded his second no-hitter against the New York Yankees in April of 1946 and went on to set career highs in strikeouts, starts, shut-outs, complete games and innings pitched that season. In 1948, he led Cleveland to their first championship since 1920, beating the Boston Braves in the World Series, four games to two. It remains the last time the Tribe has hoisted the World Series trophy. Mr. Feller won the 200th game of his career in 1950 and threw the third no-hitter of his career in July of 1951 in route to another 20 win season. Arm and back troubles slowed Feller after the 1951 season, as he won only 36 games over the next five seasons and retired after the 1956 campaign to focus on his new role as the inaugural president of the Major League Baseball Players’ Association.

Bob Feller rivaled Shirley Temple as America’s most popular teenager in the late 1930s. He won 20 games in seven different seasons, led the league in strikeouts seven times, in wins six times and is the Indians all-time leader in shutouts [46], strikeouts [2,581], innings pitched [3,828] and All-Star Game appearances [8]. He retired with a career record of 266-162 and, had he not lost four full seasons in the prime of his career to military duty, likely would have won 350 games and recorded 3,800 strikeouts. The “Heater from Van Meter” threw three career no-hitters–second only to Nolan Ryan [7] and Sandy Koufax [4]—as well as 12 one-hitters. Feller was the face of the Indians franchise and best pitcher of his era, often drawing an additional 10,000 fans to the ballpark on days when he pitched. He is the first pitcher to throw a baseball over 100 miles per hour and his high leg kick, coupled with an incomparable fastball and wicked curve, made him the best pitcher of his era. Bob Feller was elected to the Baseball Hall of Fame on the first ballot in 1962 and had his # 19 jersey retired by the Indians in 1956.