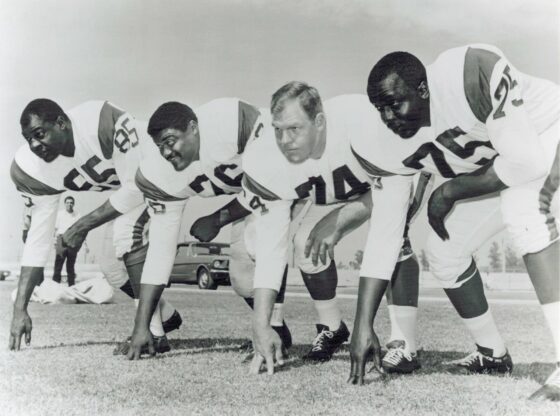 The Los Angeles Rams’ Fearsome Foursome was one of the most dominating defensive lines in pro football history.

There have been several renditions of the Fearsome Foursome.  In 1957, the New York Daily News ran an article with sketches of the New York Giants defensive line consisting of Andy Robustelli, Roosevelt Grier, Dick Modzelewski and Jim Katcavage under the headline, “A Fearsome Foursome.”  The name was first regularly used to describe the San Diego [now Los Angeles] Chargers front of the 1960s, whose ends included Ron Nery and Earl Faison as well as tackles Bill Hudson and Ernie “Big Cat” Ladd, who doubled as a pro wrestler.  That group led the Chargers — who are charter members of the American Football League — to five of the first six AFL Championship games. The 1962 Detroit Lions featured a defensive front line that was known as the Fearsome Foursome. Led by tackle Alex Karras, the Lions also featured Darris McCord, Sam Williams, and Roger Brown.

The most famous version was assembled in 1963, when the Los Angeles Rams obtained Grier from the Giants to join Lamar Lundy, Merlin Olsen, and David “Deacon” Jones. They comprised one of the most feared and entertaining defensive fronts in football history. The Rams front four had size and range and were always on the attack. Featuring two hall-of-famers who are among the best defensive linemen of all time, the Fearsome Foursome had one simple philosophy: Get to the quarterback.

There are two versions of the Rams’ Fearsome Foursome. The first played together four seasons – from 1963 to 1966 – and featured Grier at defensive tackle. After a torn Achilles tendon suffered in a 1967 preseason game forced Rosey’s retirement, he was replaced by Roger Brown [whom the Rams obtained from the Lions earlier that year] and the second iteration of the famed front was born. Jones, Olsen, Brown and Lundy played together for three seasons, gaining fame as the Rams went from a perennial second-division team to an NFL powerhouse under George Allen, hired as head coach in 1966.

David “Deacon” Jones invented the quarterback sack. Known as the “Secretary of Defense,” the Los Angeles Times called him the most valuable Ram of all time. Selected with the 186th pick of the 1961 NFL Draft, Deacon rivals Tom Brady –who was picked 199th by the Patriots in 2000 — as the biggest draft-day steal in NFL history. Football’s first speed rusher was unblockable, and his size, speed and agility had never been seen before. Jones made the quarterback sack brutal and exciting, and revolutionized the defensive end position. George Allen, called him the “greatest defensive end of modern football.” David Jones wreaked havoc from sideline to sideline and instilled fear in opponents. Sports Illustrated called him the “defensive end of the century” in 1999.

Merlin Jay Olsen is on the short list of greatest defensive tackles in football history. Analytical and intelligent, he spent his entire 15-year career with the Rams and played in a record 14 Pro Bowls. Recipient of the 1961 Outland Trophy as college football’s best lineman, Olsen was a two-time consensus All-American at Utah State. In 1962, the Rams made Merlin the third overall pick of the NFL Draft, while the Broncos selected him with the second overall pick of the AFL Draft [one spot behind quarterback Roman Gabriel, his future teammate in L.A.]. The 1962 NFL Rookie of the Year is a member of the College Football Hall of Fame, Pro Football Hall of Fame, and was voted to the NFL’s All-Decade Teams for both the 1960s and 1970s. The Sporting News ranked Merlin Olsen number 25 on its list of the 100 greatest football players.

Lamar Lundy is the most overlooked member of the Fearsome Foursome. The first black athlete to earn a scholarship to Purdue University, Lundy was MVP of both the football and basketball teams as a senior. A two-way football player for the Boilermakers, he was drafted by both the NFL and NBA in 1957. Exceptionally athletic, Lundy played tight end for the Rams early in his career, catching 35 passes and scoring six touchdowns. A member of the Indiana football and basketball halls of fame, Lundy played in the 1959 Pro Bowl and was voted All-Pro in 1967. Lundy appeared in the pilot episode of television’s Lost in Space and recorded 68.5 sacks in 152 games. Mr. Lundy was a member of the Rams for 13 seasons.

Part of both the Giants’ and Ram’s Fearsome Foursomes, Roosevelt Grier was named after U.S. President Franklin Delano Roosevelt. A three-time All-Pro with the Giants, Grier played four seasons with the Rams before his career was cut short by an Achilles injury. Truly a gentle giant, Grier was a singer, actor [making over 70 TV appearances, including The Love Boat in 1979], and authored the book, Needlepoint for Men. The 6’5”, 280-pound Grier served as bodyguard for Ethel Kennedy during the 1968 presidential campaign and subdued Sirhan Sirhan seconds after the gunman assassinated her husband, Senator Robert Kennedy, at the Ambassador Hotel in Los Angeles in June 1968.

Like Grier, Roger Brown was a member of two defensive lines dubbed the Fearsome Foursome. The NFL’s first 300-pound player possessed size and speed that made him one of the most dynamic players of his day. The 42nd overall pick of the 1960 NFL Draft, Brown was named the league’s Outstanding Defensive Lineman in 1962, a season in which he sacked both Bart Starr and John Unitas for safeties en route to tying the NFL record for most safeties in a season. A six-time Pro Bowler, Brown spent three seasons with the Rams. He and Lundy retired following the 1969 season, ending the era of the Fearsome Foursome.

The NFL has produced some spectacular defensive lines over the years. The Minnesota Vikings’ Purple People Eaters of the 1970s featured hall-of-famers in Alan Page and Carl Eller, as did the Kansas City Chiefs with Buck Buchanan and Curly Culp. Joe Greene anchored the vaunted front of the Pittsburgh’s Steel Curtain, while the Dallas Cowboys lined up a group known as Doomsday. None were as good as the Fearsome Foursome, who Dick Butkus called “the most dominant line in history.” There was a Bunyanesque quality to the foursome. Lundy stood 6 feet 7 inches and the others topped out at six-five. At a time when most defensive lineman weighed 240 pounds, the Fearsome Foursome averaged 265, although Jones insisted there was not a day that Olsen weighed less than 290. One of the first lines to incorporate stunts, there was no way to double team all four of them. It got so bad in Detroit one year that the Lions ran one-man pass patterns, using all other nine players to keep the defensive line at bay. Their mantra was “Meet at the Quarterback.” The original rendering of the foursome – Rosey Grier’s unit – only had one winning season, yet led the league in rushing defense and sacks during their four seasons together. “What made that defensive line so formidable was that we believed we could control the tempo of the game,” said Olsen. “We focused all our energy on the quarterback. We wanted him to lay awake at night thinking of us.”

Three members of the Fearsome Foursome are no longer living. Lamar Lundy was the first to die, passing in 2007. Merlin Olsen passed away in 2010, and Deacon Jones died three years later. Roger Brown went on to become a successful restauranteur and active community leader, while Roosevelt Grier — the oldest member of pro football’s greatest defensive line — continues to serve as a Protestant minister.