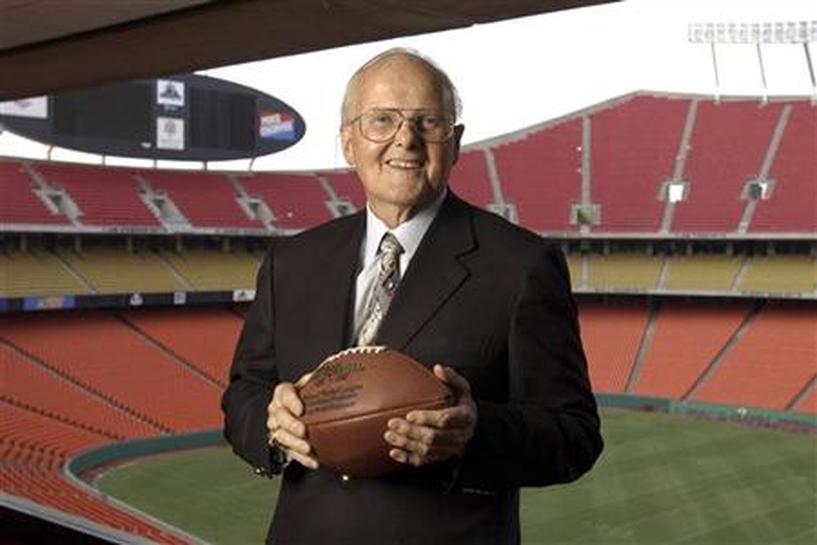 This quiet billionaire was one of the most influential figures in sports history.

Lamar Hunt was born in El Dorado, Arkansas, on this date in 1932.  He was the youngest of oil tycoon H.L. Hunt—reputed to be the richest man in the world and inspiration for the J.R. Ewing character for the television series Dallas—and Lynda Bunker’s three sons.  Lamar, who was nicknamed “Games” as a child due to his love of sports, was raised in Dallas but attended Culver Military Academy in Indiana before graduating from The Hill School—a private preparatory high school located 35 miles northwest of Philadelphia and alma mater of U.S. Army General George S. Patton—in 1951.

Hunt returned to Dallas and attended Southern Methodist University, where he was a three-year reserve on the Mustangs’ football team.  He remained in Dallas after graduating from SMU in 1956 with a geology degree.  Three years later, the 26-year-old Hunt asked the National Football League for an expansion franchise but was turned down because the league did not want to “oversaturate” the market by growing too quickly.

He then tried to buy the Chicago Cardinals with the intent of moving them to Dallas and was turned down.  Believing that professional football had a bright future in the beginning stages of the television age, Hunt decided to start a new league.  He approached several other businessmen who had unsuccessfully sought NFL franchises, including fellow Texan and oil man Bud Adams of Houston, who would become owner of the Houston Oilers.  Within seven months, the American Football League was born.

Hunt’s impossible dream became a reality when his fledgling league kicked off its inaugural season in 1960 with eight franchises, including his Dallas Texans.  In response, the NFL quickly put an expansion franchise—the Cowboys—in Dallas [Daily Dose, July 24, 2015]. The eight original owners, called the “Foolish Club,” were the subject of many jokes in the early days of the AFL’s existence.  It was David and Goliath, with the upstart league engaging in a costly battle with the established NFL in bidding for college talent.  Despite being one of the most successful teams in the AFL, the Texans had to compete with the Cowboys for fans.

After Kansas City Mayor H. Roe Bartle promised Hunt home attendance of 25,000 per game, the owner moved the team to Kansas City in 1963 and the Texans became the Chiefs.  Hank Stram was hired as coach and the Chiefs became one of pro football’s finest organizations.  Hunt was the leader of several daring and forceful moves the AFL made.  His solid organization gave the league strength and, in June 1966, it was announced that the AFL and NFL would become one league.

Lamar Hunt was instrumental in the merger.  Kansas City won three AFL championships, played in two of the first four Super Bowls, and were the winningest team in the ten-year history of the AFL.  “Before there was a player, coach, or general manager in the league there was Lamar Hunt,” said former Patriots owner William Sullivan, “Hunt was the cornerstone, the integrity of the league.  Without him, there would have been no AFL.”  Fittingly, Hunt’s Chiefs beat the heavily favored Minnesota Vikings—who mauled NFL competition and went 12-2 in the 1969 season—to win Super Bowl IV, the last NFL-AFL title game played before the merger.

Lamar Hunt permanently changed the landscape of pro football.  His humility was one of his most endearing traits and he declined to take credit for his efforts.  The anti-Jerry Jones, who talks a lot but has little to back it up, Mr. Hunt was a pioneer.  Few individuals helped change the face of America’s favorite game for the better more than this quiet Texan.  Hunt advocated the two-point conversion and adding a second Thanksgiving Day game.  He designed the modern NFL playoff format and, inspired by his children’s toy Superball, is credited with naming the NFL title game the Super Bowl.

Hunt was one of the founding investors in the six-time world champion Chicago Bulls, was involved in the formation of the North American Soccer League, and founded the World Championship Tennis [WTC] Tour.  As an owner, he earned 13 championship rings.  Hunt is mentioned in the same breath as Halas, Mara and Rooney, and the champion of the AFC is awarded the Lamar Hunt Trophy.  He was the driving force behind Kansas City’s Arrowhead Stadium, providing one of the most decided home field advantages in sports, and is a member of eight halls of fame.

Mr. Hunt is a member of the NFL Alumni’s “Order of the Leather Helmet,” was a recipient of the U.S. Soccer Federation’s Lifetime Achievement Award and was voted one of soccer’s “25 Most Influential People” in 1999.  Lamar Hunt led the Kansas City Chiefs for 47 years.  In 1972, he became the first AFL figure enshrined in the Pro Football Hall of Fame, just 13 years after he became involved in the game.  Mr. Hunt died December 13, 2006.  He was 74 years old.  In 2005, Clark Hunt, one of Lamar’s four children, was named Chairman and CEO of the Kansas City Chiefs.

“Lamar Hunt went to the NFL and he said, ‘I want to buy a team’ and they said, ‘no.’ That just tickles me to death.  Lamar said, ‘Well, if you don’t want to give me a team, I’ll just go start my own league.”- Hall of Fame wide receiver Don Maynard