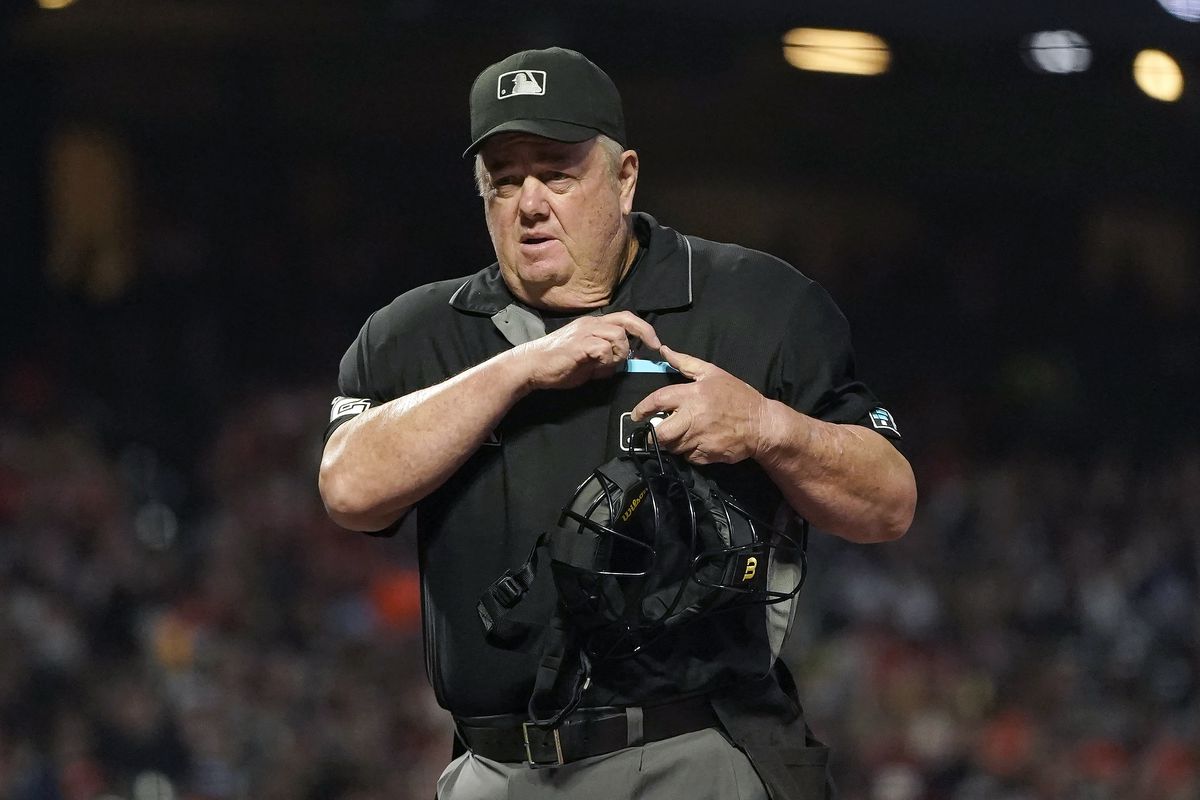 Joe West is the most senior umpire in baseball, having served MLB since 1976.  He has called over 5,000 games –  more than Dodger Stadium has hosted.

His career has spanned six of the ten commissioners in the history of baseball, and West has worked more World Series games than any current MLB umpire.

Other umpires work games; West controls them.  Baseball’s most recognizable ump has dedicated his life to being an arbiter of the game.  Only Bill Klem [5,375] and Bruce Fromming [5,163] have worked more regular-season games.

Cowboy Joe is the only umpire who stands between managers and other umpires on his crew, effectively ending arguments before they begin.

He insists players greet him before their first at-bat, and will not allow the game to continue until they do.

West worked Nolan Ryan’s fifth career no-hitter, was on the field for Willie McCovey’s 500th home run, and was the first base umpire for Felix Hernandez’s perfect game in August 2012.

Joseph Henry West was born in Asheville, North Carolina, October 1, 1952, and grew up an hour away, in Greenville.

He played safety on the freshman football team at East Carolina, then transferred to Elon College where, as quarterback and team MVP, he led the Phoenix to three conference titles.  In 1986, the Blue Cowboy was inducted into the Elon Sports Hall of Fame.

After graduating first in his class in the 1974 Umpire Development School, West was assigned to the Western Carolina [now South Atlantic] League, and was later inducted into its hall of fame.

He made his major league debut September 14, 1976, in Atlanta, working third base in a Braves-Astros doubleheader.  Two years later, West became a full-time National League umpire.

In 1981, West – who had just turned 29 — became the youngest umpire to work a National League Championship Series.

Country Joe has worked with more than 130 umpires.  The first four he worked with, Tom Gorman, Paul Pryor, Art Williams and John McSherry, have all passed away.

He has called games involving 55 hall-of-famers and umpired the first two Wild Card Games in National League history.  West has worked 123 postseason games, second only to Gerry Davis’ record of 133.

A country music singer/songwriter who has recorded four albums and has appeared at the Grand Ole Opry, West had an acting role in the 1988 comedy film The Naked Gun: From the Files of Police Squad.  A single-digit handicapper, the multi-talented West also competes on the Celebrity Player’s Tour.

West is President of the World Umpires Association and helped negotiate the largest umpiring contract in baseball history.  He developed and patented the WestVest, the hard shell chest protector worn today by all MLB umpires.

Blue Cowboy is the title of Joe West’s first album.  It is also the most fitting of nicknames.  In June 2017, West umpired his 5,000th game.  Three weeks later, he served as crew chief and home plate umpire in his third career All-Star Game, in Miami.

In the middle of the 2017 Mid-Summer Classic, outfielder Nelson Cruz had catcher Yadier Molina snap a photo of him and West before Cruz stepped in to hit.

Umpiring’s elder statesman is also controversial.  In August 2017, he was suspended for three games by MLB after calling Texas Rangers third baseman Adrian Beltre “the biggest complainer in baseball.”

A 2007 review of umpire strike zones stated that West was the most consistent umpire in the major leagues.  In a 2011 Sports Illustrated player’s poll, West was voted baseball’s worst umpire, but those players also voted him the game’s fifth-best umpire.

Cowboy Joe was the only ump to appear on both lists.

Today, pitchers and catchers report to spring training in the Cactus and Grapefruit Leagues, marking the start of the 2018 Major League Baseball season.

“The best thing ever is that major league baseball spent $40 million to put in a system that proves we’re 99 percent right.”  Joe West, on MLB introducing Replay Review.