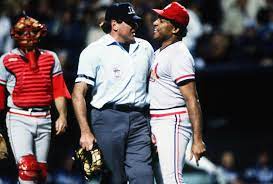 Don Denkinger was one of Major League Baseball’s finest umpires for three decades.  But his career was defined by one blown call.

Denkinger was a good umpire.  He worked four World Series, serving as crew chief in two.  The affable Iowan umpired the All-Star Game in 1971, 1976 and 1987, calling balls and strikes for the last game.  He officiated in six American League Championship Series and two Division Series.  Denkinger was behind the plate for the 1978 Yankees-Red Sox tiebreaker —  the famous Bucky Dent home run game.

An American League umpire from 1969 to 1998, Denkinger is one of the first AL umpires to switch from the outside chest protector to the inside protector.  He became a crew chief in 1977.  The highly-respected Denkinger is one of seven umpires who have worked two perfect games and one of four to have been selected as crew chief for the ALCS three times.

Born in Cedar Falls, Iowa, August 28, 1936, Donald Anton Denkinger was a three-sport star at Cedar Falls High, competing in football, wrestling, and track.  Wrestling landed him at nearby Wartburg College.  After two years in the Army, he followed a girl to Florida and ended up on his own and in an umpiring school in Daytona Beach.  That was January 1960.

The son of German immigrants, Denkinger graduated at the top of an 85-student class and worked his way up from Class D through Triple-A.  He made the big leagues when the American League expanded in 1969.  Sixteen years later, his name would enter baseball infamy.

The 1985 World Series featured the St. Louis Cardinals and the Kansas City Royals.  St. Louis came in as favorites, having won a major league-best 101 games.  The Cards were loaded.  Centerfielder Willie McGee was league MVP, Vince Coleman had been named 1985 Rookie of the Year, and the pitching staff featured two 20-game winners.  Meanwhile, the AL-Champion Royals had won 91 games but were ranked 13th in the 14-team AL in scoring.

Game 6 was played in Kansas City.  With the Cardinals leading the Series, 3-2, and the game, 1-0, the Royals came to bat in the bottom of the ninth inning.  The first eight-and-a-half innings had been uneventful.  There were no disputed calls.  Denkinger was at first base, his sixth position in the Series after beginning the rotation behind home plate in Game 1.   As they say about good umpires, Denkinger had remained unnoticed.

The Cards had taken the field with a ninth-inning lead 97 times that season.  And they had won 97 times.  Todd Worrell, the Redbirds rocket-armed rookie sensation, was on the mound.  The first batter he faced was Royals’ pinch-hitter Jorge Orta.  The fourth pitch was an 0-2 fastball that Orta chopped to the right side.  Moving to his right, Cardinals first baseman Jack Clark fielded the ball in front of second baseman Tom Herr, then tossed it sidearm to Worrell, who was racing to cover first base.  It was a close play.

Denkinger didn’t hesitate making the call, signaling “safe.”  ABC Sports was covering the game.  The first replay the network showed was a faraway shot from high along the third base line.  “Looks like he’s out,” said former Cy Young winner and Oriole hall-of-famer Jim Palmer, ABC’s color analyst.  A second angle, zoomed tight and from the first base side, left no doubt.  “Oh, yes,” said play-by-play man Al Michaels.  Another angle was shown.  “I don’t think there’s any doubt about it,” Michaels concluded.  “Only in one person’s mind,” added Palmer.

“If it happened now, they’d review it and overturn it,” said Denkinger.  “Just like that.”

Denkinger, of course, did not know whether his call had been incorrect.  But he knew it was possible.  For the remainder of the inning, Denkinger broke the golden rule of umpiring: he secretly rooted for the Cardinals to close out the game, absolving him.  He had no such luck, as the Cardinals thoroughly unspooled.  A misplay in foul territory kept the inning alive.  A line drive single, followed by a passed ball, led to an intentional walk.  With one out, Dane Iorg delivered a two-run single to give KC the win.

In the moments after Game 6, Denkinger spotted Peter Ueberroth, baseball’s commissioner, waiting at the door of the umpire’s dressing room.  He hoped for vindication.  “Did I get it right?” Denkinger asked.  Ueberroth shook his head.  “No.”

Denkinger was back behind the plate for Game 7.  One night after becoming a father, Royals right-hander Bret Saberhagen was masterful, tossing a five-hit, complete-game shutout.  The Cardinals became unglued in the fifth, allowing six runs.  St. Louis righthander Joaquin Andujar twice charged home plate to challenge Denkinger on his strike zone.  Following the second outburst, the hot-headed Dominican was ejected.  After Whitey Herzog rushed from the dugout, Denkinger tossed the Cardinals skipper as well.  The Royals breezed, 11-0, and became the first team to win the World Series after dropping games 1 and 2 at home.

Denkinger’s gaffe was ranked No. 1 on ESPN.com list of “Worst Calls in Sports History” in 2001.

Denkinger received hate mail, death threats and profane phone calls following the ’85 World Series.  A St. Louis disc-jockey went so far as to give out his telephone number and the address to his Waterloo, Iowa, home on the air.  Determined that nobody was going to change his existence, Denkinger kept the family’s address and phone number in the public listings.  He opened every piece of mail he received, storing it all in a cardboard box in his garage.

The Orta play came to be known as The Call.  Denkinger recalled seeing the replay for the first time and his realization that “the man was clearly out.”  Fans clamored for baseball to adopt the instant replay system recently implemented by the NFL.  Ueberroth rushed to Denkinger’s defense, describing the beleaguered arbiter “one of the top five umpires in the entire league” who “may have missed one.”  As time passed, the script flipped.  The angry calls tapered off, replaced by well-wishes and admiration for Denkinger’s courage and honesty.  When a Nebraska artist painted a poster of The Call, a friend gave Don a copy as a gift.  Denkinger hung it on the wall of the Silver Fox, the restaurant he owned in Waterloo.

“If anything, it’s made me even more proud of my dad,” said Denkinger’s daughter, Denise.  “He didn’t hide from it.  He didn’t say it was someone else’s fault.  He took ownership of it.”

Don Denkinger, who wore number 11, umpired for 13 more seasons after the blown call, including as crew chief of the 1991 World Series, where he worked home plate for Jack Morris and John Smoltz’s classic Game 7 duel.  Denkingerwas behind the plate in 1990 for Nolan Ryan’s sixth no-hitter and was at first base for Kenny Rogers’ perfect game in 1994.  After working 3,824 regular season big league games, a balky right knee forced Mr. Denkinger into retirement in 1988.

In 2015, Denkinger attended a reunion for the ’85 Royals in Kansas City, where he was besieged by fans asking him to sign a photo of his call at first base.  Ten years earlier, Herzog had personally invited Denkinger to the ’85 team’s’ 20-year reunion.  The St. Louis players were presented with Seiko timepieces.  Denkinger received a braille watch, which cracked up everyone in the room.

“I’m obviously reminded constantly that I made a mistake,” Mr. Denkinger said.  “You know what?  I was an umpire for more than 30 years in the Major Leagues.  I know I made a lot of mistakes.  That one was just blown out of proportion.”