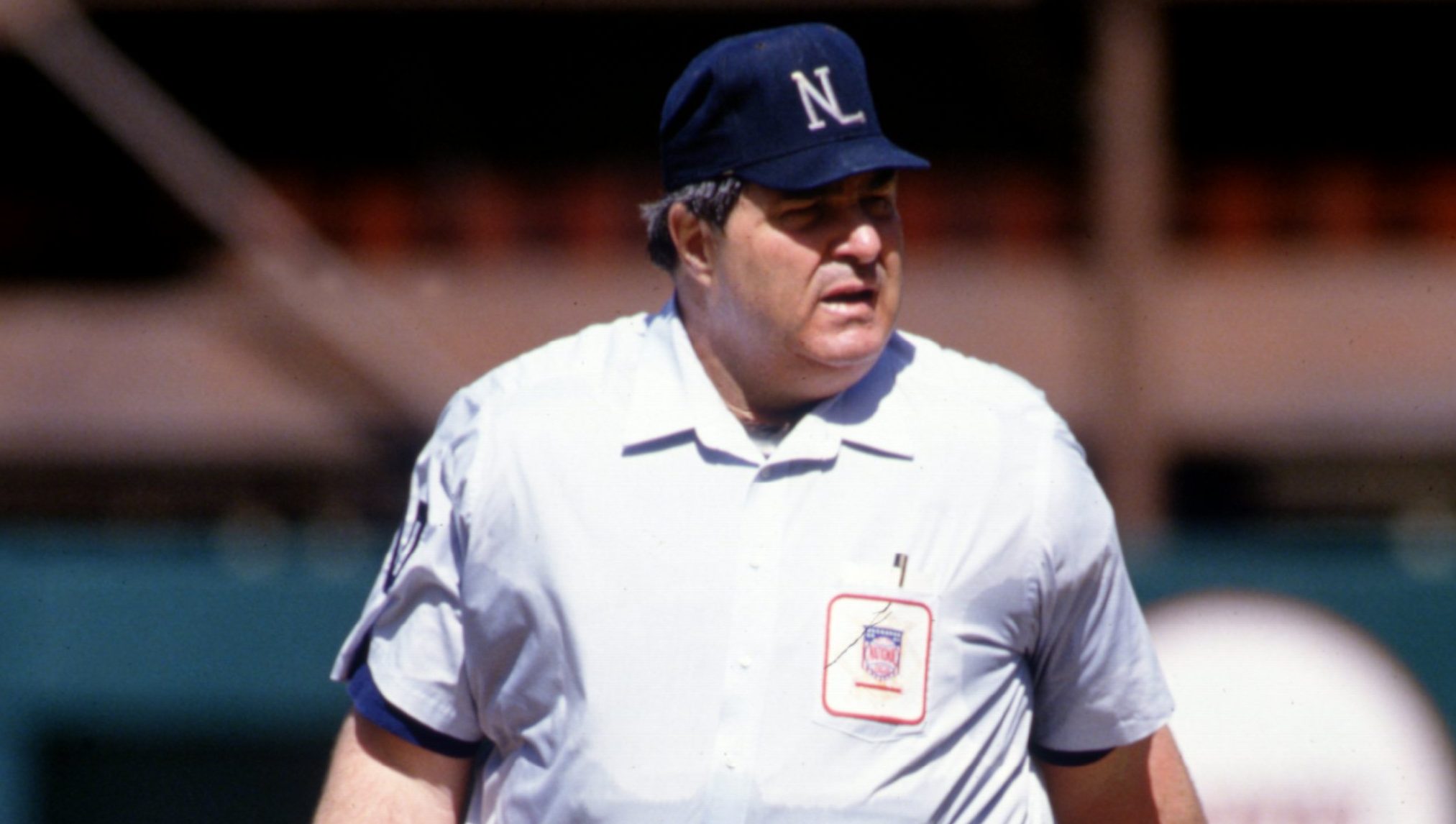 John McSherry lived for umpiring — and he died doing it.

On April Fool’s Day 1996 – seven pitches into the first game of the baseball season – home plate umpire McSherry collapsed as he walked unsteadily from his position behind the catcher toward the backstop at Riverfront Stadium in Cincinnati.  Within an hour, he was pronounced dead.

Beginning his 26th season as a National League umpire, McSherry was beloved.  He was in good spirits before the game, jokingly telling Reds catcher, Eddie Taubensee, “Eddie, you can call the first two innings.”  While none of the other three members of McSherry’s umpiring crew saw anything out of the ordinary, Jim Tracy did.  The Expos coach reported later that, when he brought out his lineup card, McSherry slurred some of his words.

Reds starting pitcher Pete Schourek was stunned with how the game began.  He delivered his first pitch of the season – a fastball over the heart of the plate to Montreal’s Mark Grudzielanek – at 2:05 p.m.  “It was right down the middle,” recalled the Reds southpaw, “and he called it a ball, and it wasn’t like he didn’t react to it.”  Grudzielanek flied out to right field, then Expos second baseman Mike Lansing struck out swinging.  Rondell White was next, and with the count 1-1, McSherry stepped away from the plate, raised his right hand, and waved it toward second base.

“He just said, ‘Hold on, timeout for a second,’ Taubensee recalled.  “I turned around and asked if he was alright.  He didn’t say anything.  I thought he pulled something by the way he was walking.”  McSherry walked silently toward the gate behind home plate, apparently trying to get to the umpires’ room.

At 2:11 p.m. EST, the 51-year-old crew chief collapsed ten feet from the gate and never regained consciousness.  Efforts to resuscitate McSherry were started on the field, but by the time he had reached the hospital, he had already died — the result of a massive heart attack.

Previously diagnosed with a cardiac arrhythmia, McSherry had a doctor’s appointment scheduled for the following day.

Third base umpire Tom Hallion followed his friend to University Hospital, leaving Jerry Crawford and Steve Rippley to sort things out at the stadium.  Their first plan was to play ball.  As professional umpires, the crew was inclined to subordinate their own interests to the greater good.  “I want you to know that right now, you do not have to worry about not playing this game,” Reds manager Ray Knight told Crawford.  “And I’ll support you 100 percent.”

Crawford told Knight he planned to go with two umpires and play the game once the starting pitchers were warm and ready.  Knight returned to the clubhouse to find his team in no frame of mind to continue.  Many of his players were in tears.  Barry Larkin and Eric Davis went to the umpires’ room behind home plate to offer their condolences and express their concerns about playing.  “In good conscience, out of respect for life, I can’t go out there,” said Larkin.

At 2:45, the PA announcer told the 53,000 in attendance the game would resume in 30 minutes.  The next thing they heard – 36 minutes later – was that the game was postponed to the following day. Crawford called the game off, citing the emotions of all involved.  “It’s probably a little too traumatic,” said the 19-year veteran.  The crowd was never told that McSherry had died.

The next day, Rich Reiker joined the umpiring crew as an emergency replacement at third base as the Reds defeated the Expos, 4-1.  “It would have been inappropriate to play the game,” said Reds first baseman Hal Morris. “It was important to call it off.”

“I watched a man die today,” Reds pitcher Pete Schourek said, “and it hits home in a hurry.”

A well-respected umpire, McSherry worked in the National League for 26 years until his death.  He was a fixture in the game, an “umpire’s umpire.”  McSherry taught at the umpire development school, mentoring many who went on to reach the big leagues.  “Whether or not he was right, he was always fair, said Knight, who was in his first season as Reds skipper in 1996.  “He would never try to overpower you.  He was a supportive, solid, caring umpire.

McSherry was the home plate umpire for the sixth and final game of the 1977 World Series, when Reggie Jackson belted three home runs off three different Los Angeles Dodgers pitchers at Yankee Stadium on the way to an 8-4 victory.  After Jackson’s first homer off Burt Hooten, Dodgers manager Tommy Lasorda came to the mound to make a pitching change.  Lasorda asked McSherry who he should summon from the bullpen; McSherry suggested right-hander Elias Sosa.  In the fifth inning, Sosa surrendered Jackson’s second home run of the game.

McSherry umpired in two World Series.  He worked the NLCS eight times and officiated the NLDS twice.  The New York native was assigned to the All-Star Game in 1975, 1982 and 1991.  McSherry was the home plate umpire in May 1975, when Houston Astros first baseman Bob Watson scored MLB’s one millionth run against the San Francisco Giants at Candlestick Park.  He was behind the dish at the Astrodome in July 1976 when Houston right-hander Larry Dierkerno-hit the Montreal Expos.  The even-tempered McSherry was the first base umpire during a Cubs-Astros game in September 1986 that saw a record 53 players used in an 18-inning game that took two days to complete.

An umpire has to like the life.  If he doesn’t like the life, it’s going to be a long and lonely season. – John McSherry, as told to USA Today in 1990.

Born in the Bronx September 11, 1944, John Patrick McSherry was raised in a baseball family.  His mother, who loved the Brooklyn Dodgers, once worked as a hot dog vendor at Yankee Stadium.  McSherry attended St. John’s University before beginning his umpiring career.  He moved through the minors quickly, jumping from Class A to Triple-A and reaching the National League in 1971, at 26.

The 6’3” McSherry came into the National League at 225 pounds.  By Opening Day 1996, he had gained well over 100 pounds.  While officially listed at 328, some sources placed his true weight closer to 400 pounds.  McSherry had experienced a series of health problems dating to 1991 when he collapsed because of dehydration during a game between St. Louis and Atlanta.  He took a leave of absence later that season after complaining of shortness of breath during a Braves- Cubs series.  McSherry started off behind the plate for Game 7 of the 1992 NLCS but had to leave in the early innings because of dizziness.  In 1993, he left a game between Los Angeles and Cincinnati after becoming ill in 87-degree heat.

The issue of overweight umpires gained national attention during the 1987 World Series, when McSherry was part of a crew that included 300-pound Ken Kaiser and Lee Weyer and Greg Kosc, who each weighed 280.  The crew became the butt of jokes on late-night TV.  Ironically, McSherry became a crew chief as a replacement for Weyer after Weyer died of a heart attack the following year.  The National League did not have stringent health requirements for umpires, though it did send McSherry to a weight-loss center at Duke University on two occasions.  The only requirement was for umpires to pass a physical – administered by their own doctor – before the start of the season.

A respected arbiter, McSherry’s No. 10 was retired by the National League and the Reds named the umpires’ dressing room at Riverfront Stadium in his honor.  Partly as a result of his death, MLB instituted a fitness clause for its umpires.