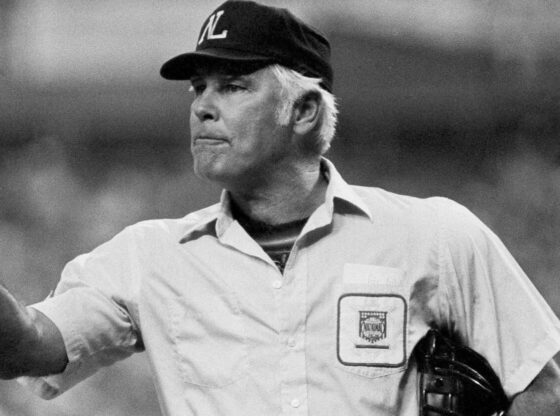 Great sporting contests involve players, coaches and officials all performing at the highest level.  Here are a dozen of the sporting world’s all-time best officials.

Born on this date in 1926, Marvin “Mendy” Rudolph officiated 2,112 NBA games from 1953 to 1978.  The first to call more than 2,000 games, the charismatic and personable Rudolph worked eight All Star Games and at least one NBA Finals game for 22 straight seasons.  The quality of his work became the standard by which NBA officials are measured today.  Mendy Rudolph passed away in 1979, at 53.  His number 5 was retired by the NBA.

One of the greats of the whistle-blowing profession, Walt Coleman has been an NFL official since 1989 and a crew chief since 1995.  Coleman made the infamous Tuck Rule call on the Charles Woodson strip-sack of Tom Brady in the 2002 playoffs.  The NFL has not put him on a Raiders game since.  Mr. Coleman has worked three Super Bowls.  His son, Walt Coleman IV, became an NFL official in 2015.

Doug Harvey had such command of the baseball rules the players referred to him as God.  A National League umpire for 30 years who was the ninth ump inducted into the Baseball Hall of Fame, Harvey called five World Series and six All-Star Games.  Second only to Bill Klem as the finest arbiter in baseball history, Harvey was working second base when Roberto Clemente collected his 3,000th hit in 1972, was behind home plate in 1963 when the Alou brothers became the first siblings trio to bat consecutively in a major league game, and was calling balls and strikes when Kirk Gibson hit his famous walk off homer to win Game 1 of the 1988 World Series.

Arthur Mercante Sr. was an international boxing referee for four decades.  He served in the Navy during World War II, where his commanding officer was heavyweight champion Gene Tunney.  The great Mercante was the referee for many of the biggest fights in boxing history, including the first Ali-Frazier bout, Floyd Patterson-Ingemar Johansson, George Foreman – Joe Frazier, and Hector Camacho – Edwin Rosario.

Steve Javie spent 25 seasons working as an NBA referee before an arthritic knee forced his retirement in 2010.  His father, Stan, was an NFL official for 29 years.  Early in his career, Javie had a short temper and was quick to assess technical fouls, but matured into a fine official.  A pioneer of film study, Javie reviewed game film within two hours following every contest he worked, which included 230 playoff games and a dozen NBA Finals.

Known for his flamboyant style and clever aphorisms, Ron Luciano worked as an American League umpire from 1969 to 1979.  Luciano, who served two terms as president of the Major League Umpires Association, was famous for his long-running feud with Baltimore Orioles manager, Earl Weaver, whom he once ejected during the pregame lineup exchange.  “It’s impossible for me not to admire him,” Luciano said of Weaver, “but it’s pretty hard for me to like him.”

Hugh “Shorty” Ray is the only official in the Pro Football Hall of Fame.  Known as “Mr. Einstein,” Ray was the first technical advisor on the rules and supervisor of officials from 1938 to 1952.  Only 5’6”, 130 pounds, but a giant of pro football, Ray streamlined the rules to improve tempo of play and increase safety.

Ray Scapinello had the longest officiating career in NHL history.  A skilled skater, he served from 1971 to 2004.  In 33 seasons as an NHL linesman, “Scampy” called 2,500 regular season games, 426 playoff contests, a Canada Cup, World Cup of Hockey, three All-Star Games, and 21 Stanley Cup Finals.  The 2008 Hockey Hall of Fame inductee never once missed a game due to injury or illness.

Earl Strom officiated pro basketball for 29 years, including three in the ABA.  Known as the “Pied Piper” for his unique tweet-pause-tweet-tweet whistle-blowing sequence, Strom officiated over 2,400 regular season games, 295 playoff games and 29 NBA Finals.  Mr. Strom was inducted into the Naismith Basketball Hall of Fame in 1995 one year after his passing.

As a student at the University of Illinois, Jerry Markbreit officiated intramural football games.  He migrated to working high school games, including several involving Dick Butkus at Chicago Vocational in the late 1950s.  Following a decade in the Big Ten, where he called the 1972 Rose Bowl, Markbreit joined the NFL in 1976.  In 33 NFL seasons, Markbreit worked eight conference championships and four Super Bowls.  In 1978, he ruled Ken Stabler fumbled the ball on the Holy Roller Play, leading to a rule change – dubbed the Markbreit Rule – allowing only the fumbling player to advance a fumble on fourth down or in the last two minutes of a half.

Augie Donatelli began umpiring prison softball games while a prisoner in a German war camp during World War II.  He joined the National League in 1950 and was on the cover of the first Sports Illustrated four years later.  Mr. Donatelli created the first umpires’ union, called five World Series and worked four All-Star Games.  He worked nine no-hitters; four of them from behind the plate.  His final game calling balls and strikes came in Game 2 of the 1973 World Series, when he called the Mets’ Bud Harrelson out at home while trying to score the go-ahead run after tagging from third on a fly ball.  The above photo shows an aging Willie Mays pleading his case to Donatelli in front of home plate, but to no avail.

An average high school tennis player, Jake Garner turned his attention to umpiring at 15, and quickly became certified.  Three years later, he served as a line umpire during qualifying rounds of the 1997 U.S. Open.  Confident, calm and even-tempered, Garner is one of eight Gold Badge chair umpires employed by the United States Tennis Association.  Mr. Garner has officiated the Men’s Finals at the U.S. Open, Wimbledon, Australian Open and 2008 Olympic Games.