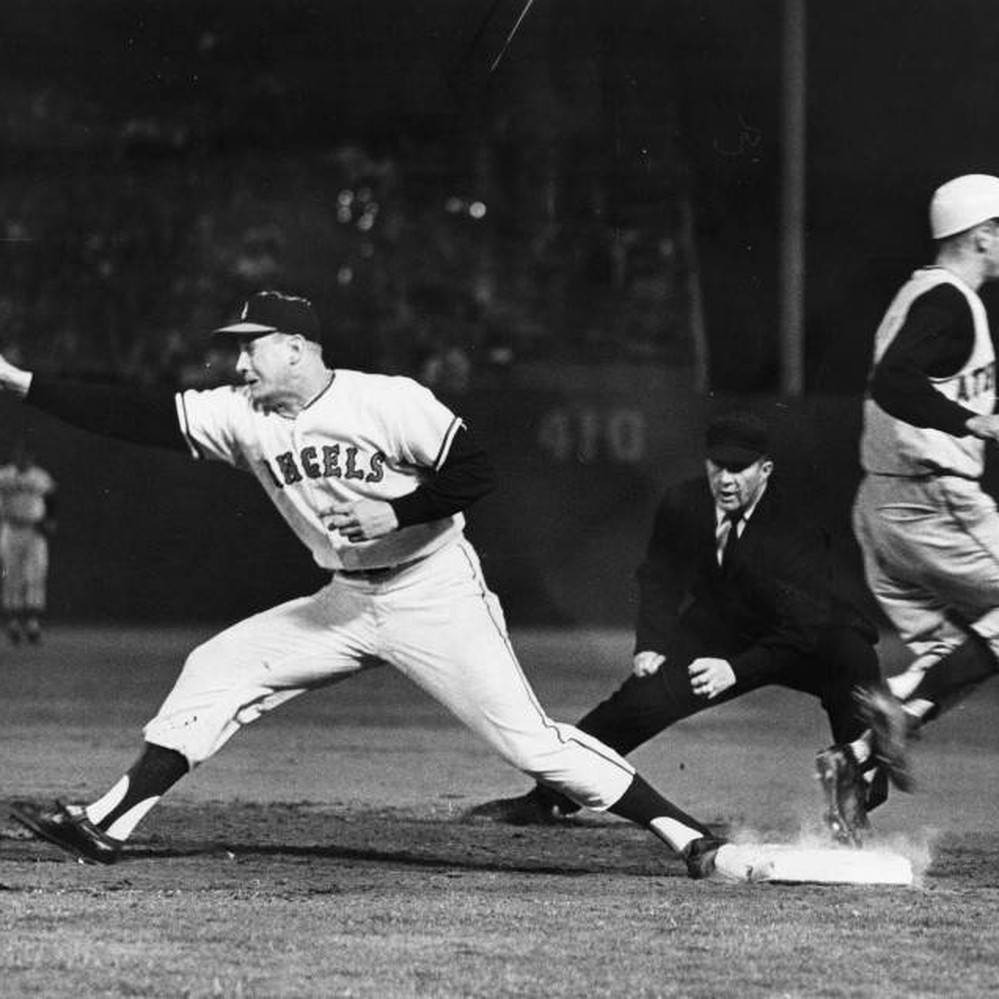 Nestor Chylak was the model major league umpire of the post-war era.

After nearly dying while serving his country during World War II, Chylak [SHY-lack] returned to the United States to pursue his passion of officiating baseball games.  He made it to the big leagues in 1954.  Four seasons later, he was calling the All-Star Game and World Series.  Chylak worked the first-ever American League Championship Series in 1969 and the first MLB game played in Toronto, in 1977.  He officiated five World Series — including the first ever played at night, at Pittsburgh’s Three Rivers Stadium in 1971 — and six All-Star Games.  After serving on the field for a quarter-century, Chylak became an assistant league supervisor of umpires.  “Few have ever been more respected in his field than Mr. Chylak,” said former MLB Commissioner Bowie Kuhn.

Nestor George Chylak Jr. was the eldest of Nestor Sr. and Nellie’s five children.  Born in the small northeastern Pennsylvania town of Olyphant on this date in 1922, he studied engineering at nearby University of Scranton, alma mater of fictional Ryan Howard of NBC’s The Office.  Chylak served in the U.S. Army, where he was stationed in Europe.  He fought in the Battle of the Bulge, Germany’s last major offensive campaign and bloodiest battle of World War II.  Following the battle, Chylak was hospitalized eight weeks and was temporarily blinded from shrapnel injuries.  He was later awarded both the Silver Star and Purple Heart for his courage in battle.

Less than two years after the explosion, Chylak began umpiring amateur baseball.  He quickly moved into the minors, calling games in the PONY, Canadian-American, New England, and Eastern Leagues.  In 1954, he got his call to the bigs and made his debut as an American League umpire.

Over the next 25 years, Chylak was involved in many of baseball’s most memorable moments.  He was on the field when Pittsburgh Pirates second-baseman Bill Mazeroski hit a walk-off homer to win Game 7 over the Yankees in the 1960 World Series.  Chylak was behind the plate for Game 2 of the 1966 World Series, when 20-year-old Jim Palmer faced Sandy Koufax in what would prove to be the brilliant left-hander’s final game.  Chylak later called these two games the greatest thrills of his career.  He called balls and strikes in Game 7 of the 1971 World Series, won by the Pittsburgh Pirates, and was behind the plate for the Toronto Blue Jay’s home opener in 1977, which was played in a snowstorm at Exhibition Stadium.  Later that season, Chylak was on the field when Reggie Jackson became “Mr. October.”  He was crew chief for the 1977 World Series, where Jackson famously belted three home runs off three different pitchers to clinch Game 6 and the world championship for the New York Yankees.

On the field, Chylak commanded respect.  He officiated the game with tact and a sense of humor.  He liked to say, “My initials are N.C. – no comment.”  Chylak served the game as few had before him, or have since.  “I umpired for 25 years and can honestly say I never called one wrong in my heart,” he once said.  “The way I see it, an umpire must be perfect on the first day of the season and then get better every day.”

Chylak was on hand for two of the biggest fiascos in major league baseball history.  On June 4, 1974, the Indians hosted the Texas Rangers during Ten Cent Beer Night at Cleveland’s Municipal Stadium.  In a promotion aimed at boosting attendance, fans were offered 12 fluid ounces of beer for just ten cents each [48 cents today], with a limit of six beers per purchase and unlimited visits to the beer stand.  During the game, several of the 25,000 fans in attendance became unruly, inciting fights with players and pouring beer on them.  A riot broke out in the ninth inning, and Chylak – who was the crew chief – declared the game a forfeit after getting hit in the face with a chair.  Following an investigation by MLB, American League President Lee MacPhail stated, “There is no question that beer played a part in the riot.”

After moving to a supervisory role following his retirement from the field, Mr. Chylak was in the umpires dressing room at Comiskey Park in Chicago on Disco Demolition Night, a July 12, 1979, doubleheader between the White Sox and Detroit Tigers.  When unruly fans began to riot and blow up disco records on the field between games, Chylak told White Sox owner Bill Veeck that, under no circumstances, would the second game of the doubleheader be played.  Veeck was livid, but Chylak did not relent, and the White Sox forfeited the game.

Chylak was good at his craft, and others took notice.  “Nestor is one of the ultra, ultra-good umpires.  And the players respond to him,” said Boston Red Sox hall-of-famer Johnny Pesky.  “He’s a good hustler.  He always seems to be in the right place at the right time.”  Longtime Detroit Tigers coach Dick Tracewski said, “Very few of us reach what Nestor reached – the best at his job.  And he was absolutely the best.”

After serving for three years as Assistant Supervisor of American League umpires, Nestor George Chylak Jr. died February 17, 1982.  He was 59, and was laid to rest in Peckville, Pennsylvania.  “He was considered an outstanding teacher and certainly one of the finest umpires in major league baseball in modern times,” said Lee MacPhail.  “Baseball has lost a wonderful friend and great umpire.”

Nestor Chylak was inducted into the Baseball Hall of Fame in 1999.

“This must be the only job in America that everybody knows how to do better than the guy who is doing it.”
– Nestor Chylak Jr.