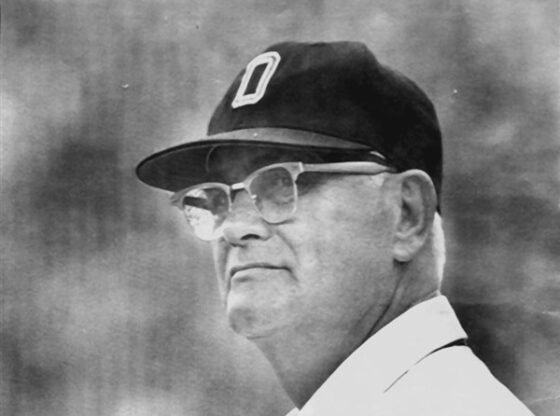 Today we celebrate the birthdays of several sporting legends, all of whom were born on Valentine’s Day.

Arguably the most prominent announcer in baseball at the peak of his career, Mel Allen — the Voice of the Yankees – broadcast our national pastime for seven decades.  Born in Birmingham, Alabama, in 1913, Allen called 22 World Series and 24 All-Star Games.  How a-bout that?

Joseph Bernard Geoffrion helped innovate hockey’s slap shot, earning him the nickname “Boom Boom.”  Named one of the ‘100 Greatest NHL Players’ in 2017, the Montreal native played 16 NHL seasons and entered the Hockey Hall of Fame in 1972.

While playing golf at the University of Florida, future Gator Great Robert Joseph Murphy Jr. won the 1965 U.S. Amateur and 1966 NCAA individual title.  A high school football and baseball star, “Murph” went on to capture five PGA Tour titles before winning 11 times on the Champions Tour.  The Brooklyn native was a member of the 1975 Ryder Cup team and served as a golf commentator for 25 years before retiring in 2009.

The finest quarterback in the history of both the USFL and Buffalo Bills, James Edward Kelly was as tough as they come.  Born on this date in 1960, the five-time Pro Bowler and 1991 NFL passing touchdowns leader guided the Bills to a record four consecutive Super Bowls before landing in the Pro Football Hall of Fame in 2002.

Before Tom Brady, Drew McQueen Bledsoe was the face of the New England Patriots.  The first overall pick of the 1993 NFL Draft played 14 seasons and won a Super Bowl ring as TB12’s backup in 2001.  A four-time Pro Bowler and member of the Patriots Hall of Fame, Bledsoe – born in Ellensburg, Washington, in 1972 — was named 1992 Pac-10 Offensive Player of the Year.

Born in Gardena, California, point guard Tyus Dwayne Edney led UCLA to the 1995 NCAA championship.  Edney played 15 professional seasons – four in the NBA and 11 abroad – before being elected to the UCLA Athletics Hall of Fame and Pac-12 Hall of Honor.