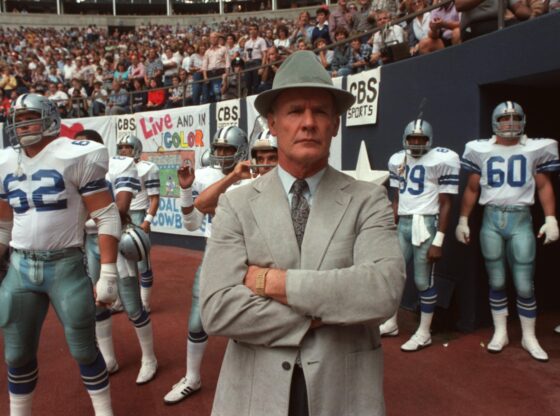 Thomas Wade Landry is one of the greatest and most innovative coaches in professional football  history.

Born in Mission, Texas, on September 11, 1924—the same day Paul “Bear” Bryant was born just eleven years earlier—Tom was the second of four children born to Ray and Ruth Landry, who had moved from Illinois to the warmer Texas climate because of Ray’s rheumatism.  Tom attended Mission High School, where he was an “A” student, class president and member of the National Honor Society.  He also played quarterback and punted for the football team.  In his senior season, the Eagles outscored their opponents, 322-0, and Landry led them to a 12-0 record culminating with a 33-0 victory over Hondo High School in the 1941 state title game.  After playing in the Texas High School All-Star Game, Landry accepted a scholarship to the University of Texas but left after one semester to serve in the United States Army Air Corps in honor of his older brother Robert, whose plane had gone down in the North Atlantic while serving in World War II.  Landry was trained as a B-17 Flying Fortress pilot and completed 30 combat missions over Germany between November 1944 and April 1945.  Following the war, he was discharged as a first lieutenant and returned to UT in the fall of 1946.  He had been recruited to play quarterback, but future Hall of Famer Bobby Layne was leading the Longhorns when Landry arrived back in Austin, so he was moved to fullback and defensive back, where he earned All-Southeast Conference honors as a junior and captained the ‘Horns to an upset win over Georgia in the 1949 Orange Bowl.

After graduating from UT in 1949 with a degree in business administration, Landry joined the New York Yankees of the All-American Football Conference [AAFC], playing defensive back, kick returner and punter.  The AAFC folded following the 1949 season, so Landry moved across town to play for the NFL’s New York Giants, where he intercepted 32 passes and recovered seven fumbles playing defensive back from 1950 to 1955.  He was selected All-Pro in 1954 and served as player-coach for two seasons before retiring to become a full-time coach for the Giants following the 1955 campaign.  Landry served as defensive coach while Vince Lombardi handled the offense, guiding the Giants to three Eastern Conference titles and an NFL Championship between 1956 and 1959.  Giants head coach Jim Lee Howell called Landry “the greatest football coach in the game today” before he left New York for Dallas, where he accepted the head coaching position with the expansion Cowboys for their inaugural season in 1960.

Tom Landry was a 36-year-old father of three when became the first head coach of the Dallas Cowboys, who hired him for $34,000 per year.   The team went 0-11-1 in his first year and did not get much better, going 18-46-4 in his first five seasons while playing before small crowds in the cavernous Cotton Bowl.  Despite the record, Cowboys owner Clint Murchison, Jr. gave Landry a ten-year contract extension after the 1964 season.  Two years later, Landry had the first of 20 straight winning seasons, going 10-3-1 while claiming the NFL East title.  It was the first of six consecutive Division titles, culminating with the franchises’ first Super Bowl win in 1971.  During the nine seasons from 1970 to 1978, Dallas played in seven NFC Championship Games and five Super Bowls, while twice winning the Lombardi Trophy as world champions.  In the following seven seasons, Landry guided the Cowboys to three NFC East titles and three straight NFC Championship Games—in 1980, ’81 and ’82.  Mr. Landry coached his 29th and final season in 1988.

Thomas Wade Landry coached the Dallas Cowboys for nearly three decades, leading them to 20 straight winning seasons, five Super Bowls and 13 Division titles.  He had a career record on 270-178-6, a career winning percentage of .605 and won two Super Bowls.  Landry won 20 playoff games, second only to Bill Belichek, and is the third-winningest coach in NFL history, behind Don Shula [Daily Dose, September 22] and George Halas.  He was a great innovator, designing the 4-3 defense that remains a staple in the NFL today, multiple offensive formations—including shotgun and spread, the “flex” defense and situational substitutions.  The Cowboys were the first NFL team to employ a strength and conditioning coach.  Mr. Landry ushered in the use of computers to assist with scouting, preparation and game planning and is the architect of the Cowboys famed “Doomsday Defense.”  He left an indelible image on the NFL—stoic, arms folded, with a rugged jaw while wearing a coat, tie and his signature fedora hat.  Tom Landry was a national icon of control, composure and loyalty.  Former Cowboys president and general manager Tex Schramm said of Landry, “He provided the leadership that set our sails,” and former linebacker Lee Roy Jordan added, “He taught that if you depend on emotion and you lose that, the result will be disappointing.  If you play on execution and knowledge, you won’t have those valleys.”  Tom Landry was inducted to the Pro Football Hall of Fame in 1990, the Dallas Cowboys Ring of Honor in 1993 and Mission High School now plays home games at Tom Landry Stadium.  He died in 2000 after battling leukemia.

On this date in 1989, new Cowboys owner Jerry Jones fired Tom Landry on a golf course in Austin, confiscated the luxury box that had been given to the Landry family by Clint Murchison, Jr. when Texas Stadium opened in 1971, and failed to renew the family’s six season tickets to Cowboys games.  Under Jones, the Cowboys have not been to a Super Bowl in two decades and finished the 2015 season with a record of 4-12.