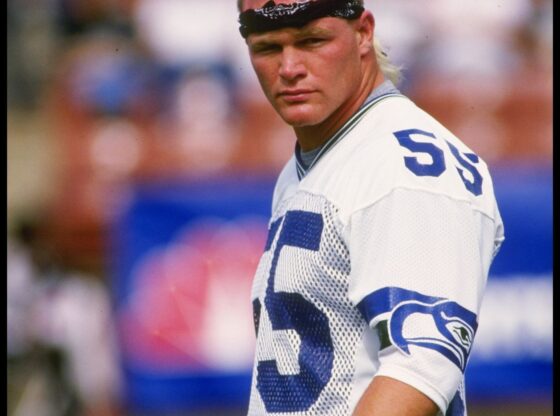 A draft bust occurs when a highly touted draftee does not meet expectations. Today we feature some of the biggest busts in NFL history.

“The Boz” turns 52 today. Born in Oklahoma City on this date in 1965, Brian Keith Bosworth grew up in Irving, Texas, where he attended high school in the shadow of Cowboys Stadium. Bosworth accepted a football scholarship to the University of Oklahoma, where he was a two-time All-American at inside linebacker. Sporting dyed-blond hair and wraparound shades, Boz fit in perfectly with coach Barry Switzer’s rebel Sooners. The tough, athletic Bosworth was named to three All-Big 8 teams and was a two-time winner of the Butkus Award as the best linebacker in college football. Fast and athletic, he was also smart, and was a member of the 1986 Academic All-American Team. After testing positive for steroids in his senior year, Bosworth was banned from the 1987 Orange Bowl.

He graduated early and was selected by the Seattle Seahawks in the 1987 NFL Supplemental Draft. Bosworth’s rookie contract was the largest in Seahawks history. It was also the largest rookie deal in the history of the NFL. He immediately sued the league over the right to wear his college number [44] and lost. Before a game against Oakland during his rookie year, Bosworth claimed he was going to “contain” Raiders running back Bo Jackson. After Jackson ran The Boz over at the goal line for a touchdown, he told Bosworth, “Next time, make sure you have bus fare.”

Prior to the 1989 season, Bosworth flunked a physical. The team doctor said Boz was a “twenty-five year old with the shoulders of a sixty year-old.” More hype than hard-hitting, Seattle waived Bosworth after two mediocre NFL seasons. He later pursued an acting career and appeared in more than a dozen films. In 2014, Mr. Bosworth was the subject of Brian and The Boz, part of ESPN’s 30-for-30 documentary series. Brian Bosworth was named to Sports Illustrated’s NCAA All-Century Team in 1999, was ranked 30th on the College Football News list of “100 Greatest Players of All Time,” and was inducted into the College Football Hall of Fame in 2015.

In 1989, Sports Illustrated featured Michigan State’s Tony Mandarich on its cover, calling him the “best offensive lineman prospect ever.” He turned out to be perhaps the biggest bust ever to play in the National Football League. Born in Oakville, Ontario, Mandarich attended high school in Kent, Ohio. He was recruited to attend Michigan State by defensive backs coach Nick Saban. He began taking steroids as a high school senior and continued using the banned substances through college, quitting midway through his senior year to avoid being caught by the NFL. Fueled by anabolic steroids, the 6’6” Mandarich grew to 320 pounds, consumed 15,000 calories a day, and benched 550 pounds.

After running 4.65 in the 40 [by comparison, Cam Newton ran 4.59 in 2011] and benching 225 pounds 39 times at the NFL Scouting Combine, he was selected by the Green Bay Packers with the second overall pick of the 1989 NFL Draft, between Troy Aikman and Barry Sanders. The loud-mouthed Mandarich cultivated a pro wrestling villain image, complete with wild hair, bandana, and Guns ‘N Roses tattoos. After signing a huge rookie contract [Mandarich became the first offensive lineman to make seven figures a season], he began abusing drugs and alcohol. Mandarich became so addicted to a morphine-like drug called Stadol that he kept a syringe in his jockstrap so he could inject himself during practice.

After three mediocre seasons in Green Bay, the Packers released Mandarich in 1992. In March 1995, he entered treatment and has been clean and sober since. “I was not sober for one day that I played in Green Bay,” Mandarich said. The highest-drafted Canadian-born player in NFL history signed with the Colts in 1996, but a shoulder injury forced his retirement after his third season in Indianapolis. Tony Mandarich started 63 NFL games over six seasons and is the only one of the top five players selected in the 1989 draft [Aikman, Sanders, Derrick Thomas, Deion Sanders] not in the Pro Football Hall of Fame. Sports Illustrated referred to Mr. Mandarich as “the incredible bulk.” Two decades later, they called him “the NFL’s incredible bust.”

After leading Russell High School to the 1992 Montana state high school football title, Ryan David Leaf turned down a scholarship offer to play linebacker for the University of Miami. Instead, Leaf attended Washington State University, where he became the greatest quarterback in school history. He threw for 21 touchdowns as a sophomore and had a breakout junior season, averaging 330 passing yards per game and tossing a Pac-10 Conference record 33 touchdown passes. Leaf led the Cougars to the league title and the school’s first Rose Bowl in 67 years.

He won the 1997 Sammy Baugh Award as the nation’s top college passer, was named Pac-10 Offensive Player of the Year and first team All-America. After finishing third in 1997 Heisman Trophy voting behind Charles Woodson [Daily Dose, 2/10/16] and Peyton Manning—with whom he would be forever inextricably linked—he decided to forgo his senior season and declare for the draft.

Leaf and Manning were considered the two best quarterback prospects in the 1998 NFL Draft, prompting heated debate as to whom would be picked first. Leaf was thought to be the better physical talent, while Manning had the intangibles. Both threw for over 3,800 yards in their final college season. In a pre-draft poll of NFL executives, 14 of 20 said they would take Leaf over Manning. The Indianapolis Colts had the first pick and interviewed them both.

While Manning impressed the Colts’ brass during his interview, Leaf missed his—a foreboding of things to come—and the Colts took Manning. The San Diego Chargers traded up to choose Leaf with the second overall pick, two spots ahead of Woodson and 19 ahead of future hall-of-famer Randy Moss. San Diego promptly inked Leaf to the largest signing bonus ever paid to a rookie. In his first NFL season, Leaf threw two touchdown passes and 15 interceptions.

His quarterback rating was 39, the fourth-lowest rating since the AFL-NFL merger in 1970. Following a cursing tirade with GM Bobby Beathard, a missed season with a shoulder injury, a confrontation with a heckling fan, and an obscenity-laced outburst toward a reporter in the locker room, the Chargers released Leaf after his third season. He was picked up by Dallas, benched after three games, and released in 2001. The careers of the top two quarterbacks taken in the 1998 draft could not be more disparate. Peyton Manning won four MVPs, while Ryan Leaf won four NFL games.

According to ESPN.com, Tim Couch is the sixth-greatest high school athlete in history, behind such icons as Jim Ryun, Tiger Woods, LeBron James and Lew Alcindor. As a junior at Leslie County [KY] High School, Couch led the state in scoring with 35 points per game and finished his career with over 3,000 points.

After throwing for more career yardage [10,104] and touchdowns [132] than any quarterback in national prep history, he was named Kentucky’s “Mr. Football” as well as USA Today All-American. Couch attended the University of Kentucky, where he obliterated school passing records. In his first three seasons in Lexington, Couch threw for 8,435 yards and 74 touchdowns.

He completed over 67 percent of his passes and set NCAA records for most completions in a single game and in a season. As a junior, Couch threw for 4,611 yards and 38 touchdowns while completing over 70 percent of his passes. After being named 1998 SEC Player of the Year, first team All-America and Heisman Trophy [Daily Dose, 12/9/16] finalist, he entered the draft following his junior season.

The Cleveland Browns foolishly bolted for Baltimore to become the Ravens in 1996. Three years later, the Browns reemerged as an expansion team and made Timothy Scott Couch the first overall selection of the 1999 NFL Draft. Couch assumed the starting quarterback role in the second game of his rookie season. He led the Browns to the playoffs in 2002 but lost his job to Kelly Holcomb the following year and was released in 2004. He tried out for the Green Bay Packers in 2004 and Jacksonville Jaguars in 2007 but made neither squad. The first player the expansion Cleveland Browns ever selected played in only 62 NFL games.

After throwing for more yards than any quarterback in Alabama high school history, JaMarcus Russell committed in 2003 to play football for Nick Saban at LSU. He redshirted his freshman year—a season in which the Tigers won the national championship—and became the Tigers starting quarterback as a sophomore. In his junior year, Russell threw for 3,129 yards and 28 touchdowns. He was named SEC Player of the Week three times during the regular season and led LSU to a 10-2 record and a berth in the Sugar Bowl. In a game that was advertised as a battle between the nation’s two best quarterbacks—Russell and Notre Dame’s Brady Quinn—Russell and LSU made sure the praise was one-sided. Russell set career marks for yardage [350] and touchdowns [3] in a 41-14 rout of the Irish.

At 6’5” and 265 pounds, Russell was an athletic freak. A punishing runner who could throw a football 75 yards from his knees, his workouts at the NFL Combine were impressive. “Three years from now you could be looking at a guy that’s certainly one of the elite top five quarterbacks in the league,” said ESPN draft analyst Mel Kiper Jr. “Look out because the skill level that he has is John Elway-like.” The Oakland Raiders used the first overall pick of the 2007 draft to select JaMarcus Russell, one of four LSU players taken in the first round.

Quinn’s draft status plummeted, as he went 22nd overall. The 2007 draft was one of the deepest in history, with Darrelle Revis, Joe Thomas, Adrian Peterson [Daily Dose, 3/21/16] and Calvin Johnson going in the first round. Lasting six hours, eight minutes, it was also the slowest first round in league history. After playing sparingly as a rookie, the Raiders named Russell the starter for the 2008 season. That offseason, he ballooned to 300 pounds and returned in 2009 to post the lowest quarterback rating [50] in the NFL. Oakland cut Russell after three seasons, paying him $ 36 million to lead them to a 7-18 record as a starter. Following an unsuccessful tryout with the Chicago Bears in 2013, Mr. Russell wrote letters to every team in the NFL, pledging to play one year for free if given an opportunity. To date, no teams have taken him up on his offer.