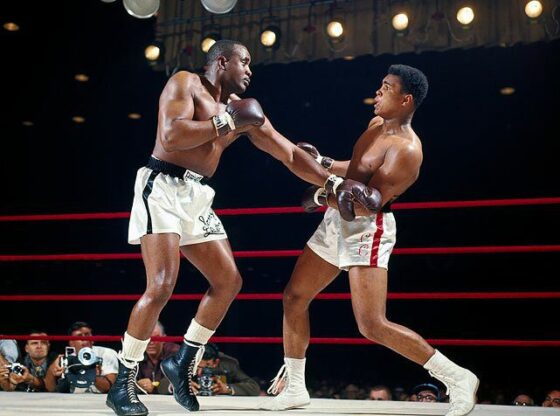 One of the greatest upsets in boxing history took place in Miami Beach, Florida, 52 years ago today when Cassius Clay defeated Sonny Liston to become heavyweight champion of the world. In February 1964, Charles L. “Sonny” Liston was the most feared boxer on the planet.  He was the World Heavyweight Champion, having demolished former champion Floyd Patterson [Daily Dose, August 18] by a first-round knockout in September 1962.  Ten months later, the two met again, and Liston dropped Patterson 130 seconds into the fight.  Liston was 6-1, weighed 218, had an 84-inch reach and 33-inch waist.  He did not smile or talk much to the press and was an intimidating figure, having learned to box in the Missouri State Penitentiary while serving time for armed robbery.  Liston was massively muscled with a pulverizing jab, lethal left hook, and potent right cross.  His only defeat came in his ninth professional fight—in 1953—and he was 35-1 [24 by knockout].  Johnny Tocco, who trained George Foreman and Mike Tyson as well as Liston, said he was the hardest hitter of all three.  The 32-year-old champion came into the fight having won his previous three bouts with first-round knockouts, and was a seven-to-one favorite coming into the fight with Clay.  Henry Cooper, who had knocked Clay down when the two fought eight months earlier, said he would want a title shot if Clay won, but was not getting into the ring with Liston. Cassius Marcellus Clay was a brash, mouthy 22-year old from Louisville, Kentucky.  He had won a gold medal as a light heavyweight at the 1960 Rome Olympics and turned pro 53 days later.  Clay came into the Liston fight with a record of 19-0 [14 by knockout], but had looked unimpressive in 1963, winning a disputed ten-round decision over Doug Jones and struggling with Cooper before stopping the Brit on cuts in his last fight.  The 6’3”, 210 pound challenger had a questionable chin and was given no chance.  The New York World-Telegram predicted “it will last longer than the Patterson fight—almost the entire first round,” while the New York Times boxing writer declined to cover the fight, assuming that it would be a mismatch.  Clay taunted his opponent mercilessly in the weeks leading up to the fight, promising a knockout.  His bus had “Sonny Liston will go in eight” painted on the side.  Clay took to calling Liston a “Big, ugly bear,”, stating, “He’s too ugly to be the world’s champ.  The world’s champ should be pretty like me,” and boasted, “If you want to lose your money, then bet on Sonny.”  The quiet Liston said of Clay, “He should be locked up for impersonating a fighter.” In November 1963—just seventeen days before the assassination of President John F. Kennedy, Liston and Clay agreed to meet for the heavyweight title.  The match was set to take place in Miami—where Clay lived and trained at Angelo Dundee’s 5th Street Gym—three months later.   America was introduced to The Beatles on The Ed Sullivan Show on Sunday, February 4.  Two weeks later, the “Fab Four” visited the 5th Street Gym while Clay was training, prompting the challenger to proclaim, “When Liston reads about the Beatles visiting me, he’ll get so mad I’ll knock him out in three!”  On February 25, 1964, 8,300 spectators gathered in the Convention Center in Miami Beach, Florida, to witness what most considered a mismatch.  In a pre-fight poll of sportswriters gathered to cover the fight, 43 of 46 picked Liston, yet Clay was the aggressor from the start, using superior speed and footwork against the slower Liston.  In the third round, Clay hit Liston with several effective combinations that caused a bruise under the champ’s right eye and a cut under his left.  Before the start of the fourth round, Liston’s corner rubbed an astringent compound on his gloves.  During the round, Liston put his gloves on Clay’s face, temporarily blinding him, and Clay stayed away from “The Big Bear” for the next two rounds.  By the sixth, Clay’s eyes had cleared and he landed punches at will, opening the cuts on Liston’s swollen face.  On his stool following the sixth, Liston told his trainer that he would not continue, complaining of a shoulder injury.  The fight was ruled a technical knockout and Cassius Clay was the new World Heavyweight Champion, screaming, “I am the greatest!” and “I shook up the world!”  Howard Cosell [Daily Dose, January 4] reported from inside the ring, “This is without question, and there is no need to pour it on, one of the most astonishing upsets in the chronicles of boxing.” Controversy abounded after the fight.  Liston was taken to St. Francis Hospital, where eight doctors consulted and concluded that he had torn a shoulder muscle and the fight should have been stopped.  Jack Nilon, Liston’s advisor, said he hurt the shoulder during training but chose not to postpone the fight “because we thought we could get away with it.”  The Miami Beach Boxing Commission ordered Liston’s $ 1,360,500 purse withheld after the fight, which Liston was allowed to collect after the doctor’s report.  One of Liston’s handlers said years later, the shoulder injury “Was all B.S.  We cooked up that shoulder thing on the spot.”  Clay was paid $ 315,000 [$ 2.44 million today] and the match grossed over $ 4.5 million, the second-highest in boxing history at the time.  Following the fight, Cassius Clay announced he was a member of the Nation of Islam and changed his name to Muhammad Ali.  The two fighters met again in Lewiston, Maine in May 1965, where Ali successfully defended his title with a controversial first-round knockout, [Daily Dose, October 8] known as the “Phantom Punch.”  Ali was a three time heavyweight champion, while Liston died of mysterious causes in January 1971.