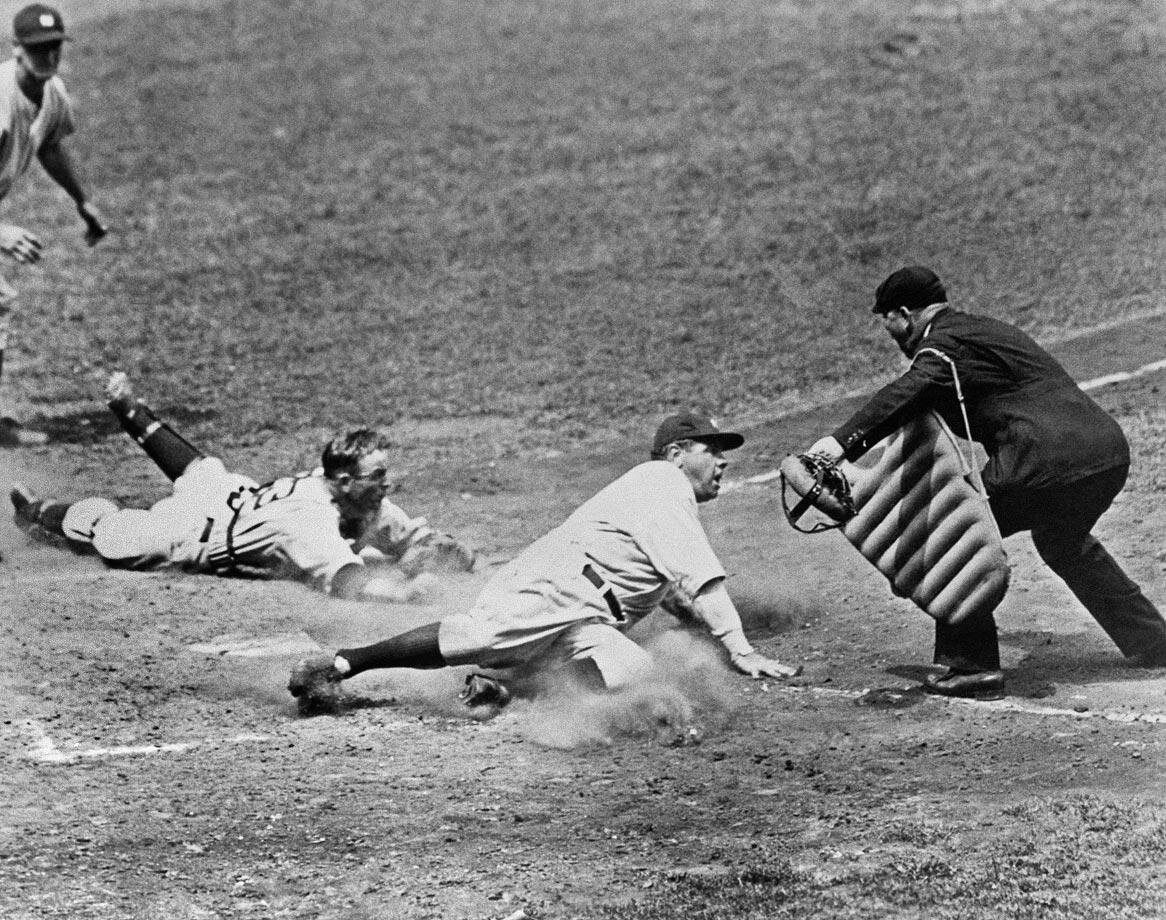 Born on February 6, 1895 in Pigtown, a working class section of Baltimore named for its meatpacking plants, he was the oldest of eight children and one of only two that survived infancy. His father owned a string of Baltimore saloons– the site of one of them is now center field at Oriole’s Park at Camden Yards, and Ruth had little supervision. He had already chewed tobacco and drank whiskey by the time his parents sent him away to the St. Mary’s School for Boys–a Catholic orphanage and reform school that had been attended by singer Al Jolson–a few years earlier. Ruth entered St. Mary’s in 1902 at age seven, was recorded as “incorrigible” and spent much of the next twelve years there. Students were required to learn a trade and Ruth’s was to be a shirt maker. Brother Mathias Boutlier, one of the Xaverian Brothers monks who ran St. Mary’s, introduced Ruth to baseball and worked with him on hitting, fielding and pitching. Ruth later credited Brother Mathias as being the most influential figure in his life and bought him a Cadillac for $ 5,000 in 1926. The monks invited Jack Dunn, owner of the minor league Baltimore Orioles, to see Ruth pitch when he was 15 years old and signed him to a professional contract while he was still living at St. Mary’s four years later. The financially-strapped Dunn sold him to the Boston Red Sox and Ruth arrived in Boston to make his major league debut on July 11, 1914, pitching seven innings in a 4-3 win over the Cleveland Naps. Earlier that morning, he had breakfast at Landers Coffee Shop and was waited on by 16-year-old Helen Woodford, whom he would marry three months later while still on parole from St. Mary’s. “Babe” earned a starting spot in the Red Sox pitching rotation and went 18-8 in 1915, his first full year in the league. He also developed a reputation as a hitter, batting .315 and demonstrating enormous power. Home runs were rare in baseball at that time; Frank “Home Run” Baker led the AL with 9 in 1914, Braggo Roth led with 7 in 1915 and Wally Pipp clouted 12 and 9 to lead the circuit the two years after that. The focus on Ruth at that time was his pitching. He faced Walter Johnson [Daily Dose, August 7] five times in 1916 and won four. He led the league in ERA [1.75], shutouts [9] and went 23-12 on the year. Boston won the World Series for the second straight year in 1916 and, in Game 2, Ruth pitched a 14-inning complete game shutout, still the longest postseason complete game victory in history. On June 23, 1917, Ruth started against the Washington Senators. The home plate umpire called the first four pitches as balls and Ruth disagreed, throwing a punch at the ump and getting ejected from the game. Ernie Shore replaced him. The base runner who had reached base on the walk was caught stealing and Shore retired the next 26 batters he faced in a 4-0 Boston win. Officially, Ruth is credited for participating in a combined no-hitter but Shore is not credited with a perfect game, having not faced the required 27 batters. In 1918, the Red Sox began playing Ruth in the outfield on days that he was not pitching. He hit .300, led the AL with 11 home runs and pitched 16 consecutive scoreless innings in the World Series to lead the Red Sox to their third title in four years. Ruth only pitched in 17 games in 1919 but hit 29 home runs, nearly three times as many as he had in the previous season, to set a new major league record. Boston finished 20 games out of first place and Boston sold Ruth’s contract to the New York Yankees following the 1919 season. “The Bambino” was baseball’s biggest star and was now playing in New York. He would join Jack Dempsey [Daily Dose, September 14], Red Grange, Bobby Jones and Bill Tilden as sporting icons in what would become the Golden Age of Sports in America. Ruth completely redefined the game, making the home run an integral part of baseball while rewriting the record books. In 1920, the first of his fifteen seasons with the Yankees, he broke his own single-season home run record of 29 by belting 54. It was the first of ten times he would lead the league in homers while wearing pinstripes. In 1921, the league average for home runs hit per team was 59, the same number Ruth hit all by himself. Put another way, his 59 bombs that season represented six percent of the league total [which doubled the total of just two years earlier]. There were 4,934 homers hit in MLB in 2012; six percent of that is 296, which would be quite a staggering single-season total. Put yet another way, Babe Ruth hit more home runs in 1921 than the combined total of five of the eight teams in the American League. America loved the long ball and nobody hit the long ball like the “Sultan of Swat” despite playing in the cavernous ballparks of his day–including Yankee Stadium–which measured 520 feet to dead-center field. Today that distance is a mere 408 feet. He broke the single-season home run record in three consecutive seasons, raising the bar from 29 to 59 along the way. He moved to the top of the career home run list in his seventh full season when he hit # 139, a record that had been held by Roger Connor for 26 years. Babe ultimately expanded that record to 714, more than five times Connor’s total. Hank Aaron went on to break it when he hit # 715 in 1975 but it took Aaron 3,965 more at-bats to do so. Ruth was also a winner. In six seasons with Boston, the Red Sox won three World Series and in his fifteen years with the Yankees they won four more. George Ruth is the only player in major league history with that last name. He played 22 seasons and held 56 major league records at the time of his retirement in 1935 and is still baseball’s all-time leader in OPS and slugging percentage. He is the only player since the turn of the 20th century to lead his league in Triple Crown categories as both a pitcher and hitter and did it in the span of three years. He never struck out more than 100 times in a season and is the only player to have hit three home runs in any postseason game twice. Baseball uses a statistic called Wins Above Replacement [WAR] that presents the number of wins the player added to his team above what a replacement [average] player would add. Babe Ruth is baseball’s all-time WAR leader [183.6], led the league in WAR ten times and is the owner of the top three single season WAR totals in history. He was inducted into the inaugural class of the Baseball Hall of Fame in 1936 and the Yankees retired his # 3 in 1948.