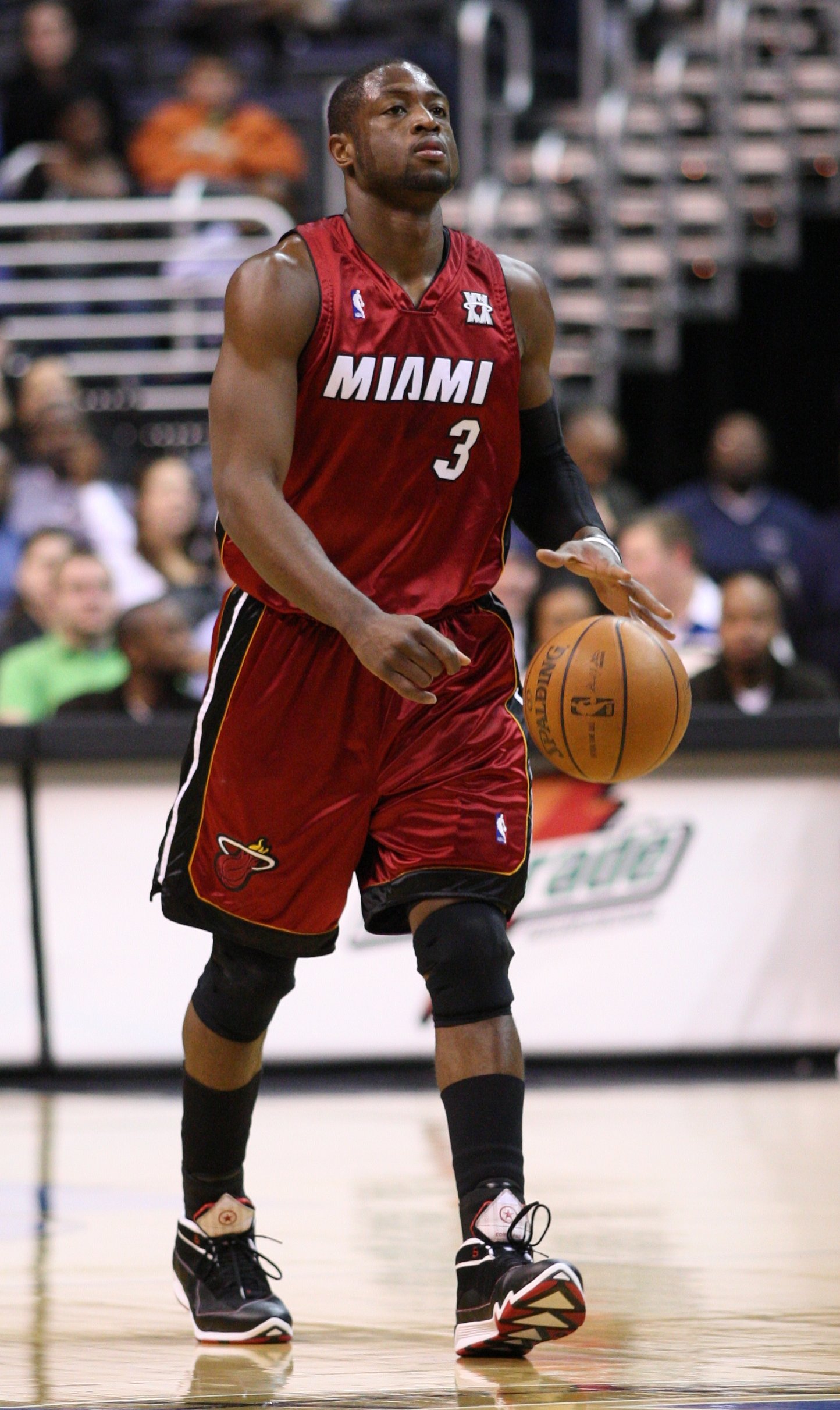 Dwyane Wade is one of the most well-known and popular players in the NBA.  A 12-time All-Star and three-time NBA champion, his was the top selling NBA jersey between 2005 and 2007.  “D-Wade” led the NBA in scoring in 2009, has twice won the NBA Skills Challenge, and was 2010 NBA All-Star Game MVP.  What may be more impressive is how he turned a football city into a basketball town.

The Miami Dolphins joined the American Football League as an expansion team for the 1968 season.  Five years later, they completed the only perfect season in pro football history and won the first of two consecutive Super Bowls.  South Florida was football country—the ’72 Dolphins, Don Shula [Daily Dose, 9/22/15], and Dan Marino were king.  Upon arriving in South Beach, Dwyane Wade did the impossible, winning three championships and helping the Heat become bigger than the Dolphins.

Born on the South Side of Chicago on this date in 1982, Dwyane Tyrone Wade Jr. was born into a difficult situation.  His 18-year-old mother, JoLinda, already had two children and was addicted to drugs.  Wade’s parents separated when he was four months old and would later divorce.  JoLinda was given custody of the children.  Struggling financially, she started dealing drugs.  Wade’s life was saved at age eight, when his sister, Tragil—who was five years older than Dwyane–took him to live with his father and stepmother in a nearby neighborhood.  A year later, Dwyane Wade Sr.—a former Army sergeant– moved the family to south-suburban Robbins.  “I got an opportunity to be a kid,” recalled Wade.  “If I had stayed with my mom, I would have been next in line to sell drugs, to join the gang.”  Drawing upon his strict military background, Wade Sr. implemented structure and put his children in sports.  “I needed that male voice.  I needed the discipline. I needed someone to look at and say, ‘I want to be like you,’” said Wade.  “It gave me dreams I never had before that.”

Wade attended Richards High School—alma mater of Dave Dombrowski, president of baseball operations for the Boston Red Sox—where he starred on the football team as a wide receiver.  He also played basketball, patterning himself after his idol, Micheal Jordan, as a shooting guard. Wade saw little playing time as an underclassman.  After growing four inches in the summer before his junior year, coach Jack Fitzgerald—whom Wade considers one of the most positive influences in his life—made Wade a starter.  As a senior, he averaged 27 points and 11 rebounds per game while also setting single-single season school records for points and assists.

Despite being one of the most highly-touted players in the Midwest, Wade faced academic problems and was only recruited by three schools:  Illinois State, DePaul, and Marquette University.  He chose to play for Tom Crean at Marquette, but had to sit out his freshman year for not meeting Prop 48 grade and test score requirements.  After regaining eligibility in 2001-02, Wade led Marquette in scoring and Conference USA in steals.  The following year, Marquette faced Kentucky in the Midwest Regional final of the NCAA tournament [Daily Dose, 12/27/16].  Wade had a spectacular game, pouring in 29 points, grabbing 11 rebounds and handing out 11 assists for only the fourth triple-double in NCAA tournament history.  The Golden Eagles beat Kentucky, sending Marquette to its first Final Four since 1977, when Al McGuire guided the [then] Warriors to the title.  Marquette lost to Kansas in the national semifinal game, but Wade was named First-Team All-America, becoming the first Golden Eagle to receive that honor since Butch Lee in 1978.  In addition, he was named Conference USA Player of the Year and was a finalist for the Wooden, Naismith, and Oscar Robertson Awards as 2003 college player of the year.  After two seasons at Marquette, Wade, who had the second-best scoring average in school history, declared for the NBA draft.

The 2003 NBA draft was one of the richest in pro basketball history.  Nine players from that draft have gone on to play in an NBA All-Star Game and three have won a league scoring title.  After LeBron James [Daily Dose, 12/30/15], Carmelo Anthony, and Chris Bosh were chosen ahead of him, the Miami Heat selected D-Wade with the fifth pick of the 2003 draft.  No Marquette player–before or since–has been drafted  higher.  In his first season, Wade led the Heat to the playoffs, where he led the team in scoring and assists and, along with James and Anthony, was named to the 2004 All-Rookie team.

Shaquille O’Neal—who later nicknamed Dwyane Wade “Flash”–joined the Heat before the 2004-05 season.  The following year, Miami beat Dallas in the 2006 NBA Finals for the first championship in franchise history.  In one of the great performances in finals history, Wade averaged nearly 34 points per game and was named series MVP.  Two years later, he was part of the “Redeem Team” that recaptured the gold medal in the 2008 Beijing Olympics after Team USA had settled for a disappointing bronze in 2004.

In 2010, James infamously announced he was leaving Cleveland and taking his talents to South Beach, where he would be joined by Bosh, who was leaving Toronto.  Dubbed the “Big Three”, Wade, Bosh and James took the NBA by storm.  The Heat appeared in four straight NBA Finals from 2010 to 2014 and won two of them—in 2012 and 2013.  James returned to Cleveland after the 2014 season and Wade opted out of his contract with the Heat one year later.  In July, 2016, D-Wade agreed to terms with the Chicago Bulls and returned home, playing in the same building where his boyhood idol, MJ,  had enjoyed his greatest success.

Dwyane Tyrone Wade Jr. is the leading scorer in Miami Hea history.   A superb defender, the 6”4” guard has blocked more shots than any player his size in league history.  A devout Christian who chose the number 3 because it represents the Holy Trinity, Mr. Wade is extremely active with various philanthropic organizations, including the Society of St. Vincent de Paul.  In 2003, he created the Wade’s World Foundation, which benefits at-risk children, and he is an avid supporter of St. Jude’s Children’s Research Hospital.

After spending much of her life addicted to drugs and serving time in prison, JoLinda Wade got sober in 2001.  She turned her life around and, six years later, became an ordained Baptist minister.  In 2008, her only son bought her a church—the non-denominational Temple of Praise in Chicago.  Today, Jolinda Wade serves as Senior Pastor of New Creation Binding & Loosing Ministries in her hometown.