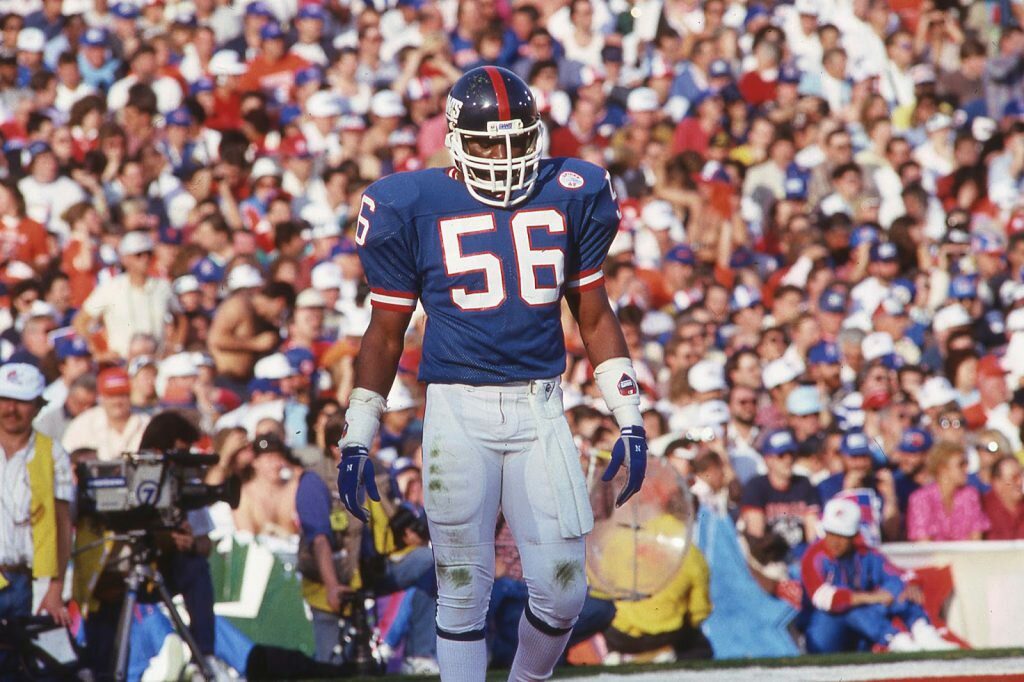 Today we present The Dirty Dozen – the 12 greatest linebackers in pro football history. The greatest linebacker in football history, Lawrence Taylor single-handedly changed the NFL.  His combination of size, speed and power had never been seen before, forcing the league to adjust.  The way LT rushed the passer changed offensive philosophies and made the left tackle – the player most responsible for protecting the quarterback’s blind side – one of the most important [and highly paid] players on the field.  LT popularized the 3-4 defense.  His presence brought about the two-tight end offense and the H-back position, and gave rise to the West Coast Offense.  Along with Alan Page, LT is one of only two defensive players ever named NFL MVP.  A ten-time Pro Bowler, Taylor won three NFL Defensive Player of the Year awards and was named to the 1980s All Decade Team. The third overall pick of the 1965 draft by the Chicago Bears, Dick Butkus was one of the most feared players in NFL history.  Selected to the NFL’s 75th anniversary team, and as a starter on both the 1960s and 1970s All-Decade Team, Butkus was a bruiser.  At the time of his retirement in 1973, Butkus had an NFL record 27 fumble recoveries and his 49 career takeaways were second-most of all time.  Perhaps the most savage tackler ever to play the game, Butkus went to eight Pro Bowls in nine seasons in a career cut short by multiple knee injuries.  The Bears have had some of the best middle linebackers in NFL history: Bill George, Mike Singletary, George Conner, and Brian Erlacher – just to name a few.  Dick Butkus is the best the Bears have ever produced. The Kansas City Chiefs have featured three of the greatest linebackers ever to play the game.  While Bobby Bell and Willie Lanier were superb, none was better than Derrick Thomas, who former Dallas Cowboys GM Gil Brandt lists as the second best linebacker in history.  Playing with boundless athleticism and a relentless pursuit of the quarterback, Thomas recorded 126.5 career sacks.  The 1988 Butkus Award winner as college football’s best linebacker left Alabama with NCAA single-season and career sack records.  Drafted fourth overall by the Chiefs in 1989, Thomas recorded an NFL-record seven sacks in a game.  One of the most fierce edge rushers in football history, Thomas played in nine Pro Bowls in 11 seasons.  He is the Chiefs’ all-time leader in sacks, safeties, fumble recoveries and forced fumbles. The captain of Green Bay Packer teams that won five NFL championships, Ray Nitschke was as tough as a two dollar steak.  The only linebacker named to both the NFL’s 50th and 75th anniversary teams, Nitschke was MVP of the 1962 NFL championship game.  He entered the University of Illinois as a quarterback, was switched to fullback, and ended up a linebacker.  The 36th pick of the 1958 draft and member of the 1960s All-Decade Team, Raymond Ernest Nitschke was rated the third-best linebacker in NFL history [behind Taylor and Butkus] by The Sporting News in 1999. As a stand-up defensive end at Miami, Ted Hendricks was a two-time All-American.  He left The U with the school record for career tackles and was drafted by the Baltimore Colts, where Don Shula converted him to linebacker as a rookie.  The 6’7”, 220-pound Hendricks was dubbed The Stork.  A member of both the 1970s and 1980s All-Decade Teams, the rangy Hendricks played for the Colts, Packers and Raiders in 15 NFL seasons.  He played in seven AFC championships and won four Super Bowls.  Versatile and reliable, Hendricks played in 215 consecutive regular-season games and eight Pro Bowls.  The Ted Hendricks Award is given annually to college football’s top defensive end. Bobby Bell is the most athletic linebacker in history.  An All-State high school quarterback, Bell started at center and defensive end at Minnesota where he was a two-time All-American.  Winner of the 1962 Outland Trophy as the best lineman in college football, Bell became an eight-time Pro Bowler as a linebacker.  One of three linebackers named to the AFL All-Time Team, Bell was the 1969 Defensive Player of the Year.  Kansas City Chiefs coach Hank Stram considered Bobby Lee Bell the most talented player he ever coached.  The backbone of the team that won the only Super Bowl in Chiefs history and member of both the college and pro football halls of fame, Bell was named to the NFL 1970s All-Decade Team. One of the first great outside linebackers was Jack Ham.  A member of Penn State’s football Mount Rushmore, Ham blended speed, intelligence and an exceptional ability to diagnose plays.  Dubbed Dobre Shunka [Polish for “good ham”], Jack Raphael Ham Jr. earned a starting position as a rookie and gained a reputation as a big-play defender.  A mainstay of the great Steel Curtain defense of the Pittsburgh Steelers, Ham was named to eight straight Pro Bowls.  The 1975 Defensive Player of the Year helped Pittsburgh to four Super Bowl titles in six years.  Ham is a member of the NFL 75th anniversary team and 1970s All-Decade Team. No linebacker played with more passion than Junior Seau.  The fifth overall pick of the 1990 draft by the San Diego Chargers, Seau was 1992 Defensive Player of the Year who became the face of the Chargers and a San Diego sports icon.  Perhaps the most dynamic player of his era, Seau combined quickness and a relentless work ethic to earn a dozen trips to the Pro Bowl.  The Tasmanian Devil had his number retired by San Diego, and he was named to the 1990s All-Decade Team.  One of the greatest Chargers of all time, Seau played three seasons in Miami and four with the New England Patriots.  Sadly, the toll of 20 NFL seasons led to CTE, and Mr. Seau took his own life in 2012, three years after retiring from football. Ray Lewis went to more Pro Bowls [13] and collected more career takeaways [51] than any middle linebacker in history.  The MVP of the 2001 Super Bowl won two NFL championships as the leader of defense that dominated the league for over a decade.  The best inside linebacker of his generation, Lewis combined range, passion and instincts.  A first team NFL All-Decade selection for the 2000s, Lewis was a two-time Defensive Player of the Year in 17 NFL seasons. The best player in Tampa Bay franchise history, Derrick Brooks played in ten straight Pro Bowls.  A first round pick out of Florida State in 1995, Brooks was 2002 Defensive Player of the Year and led the Buccaneers to their only Super Bowl title.  A 1990 High School All-American out of Pensicola and two-time consensus All-American at FSU, Brooks is one of the greatest football players ever to come out of the Sunshine State.  A swift and physical player, Brooks missed only three games in 14 NFL seasons, and his six career touchdowns ties him with Bobby Bell for most in NFL history by a linebacker. If Jack Ham was the brain of the Steel Curtain defense, then Jack Lambert was the heart.  The premier middle linebacker of his era, Lambert prided himself on his ability to hit hard and intimidate.  A former high school quarterback, Number 58 had great range and intensity.  Lambert was 1974 Defensive Rookie of the Year and 1976 NFL Defensive Player of the Year.  He played in nine straight Pro Bowls, six AFC championship games and won four Super Bowls.  At 6’4” 220 pounds, Dracula was the prototypical middle linebacker for what became the Tampa Two defense.  A chronic toe injury forced Lambert’s retirement after 11 seasons – all as a Steeler. A physical player who arrived to the ball carrier with bad intentions, you could see the desire in Mike Singletary’s eyes.  Undersized for a middle linebacker, Singletary was a human wrecking ball.  The cornerstone of the greatest defense in NFL history – the 1985 Chicago Bears – Singletary led a unit that allowed the fewest yards and points in the league.  A ten-time Pro Bowler and three-time NFC Player of the Year, Singletary was a thumper.  Despite his all-out-hard style of play, the durable linebacker missed just two games during his 12-year hall-of-fame career.  The eight-time first team All-Pro was named to the 1980s All-Decade Team.