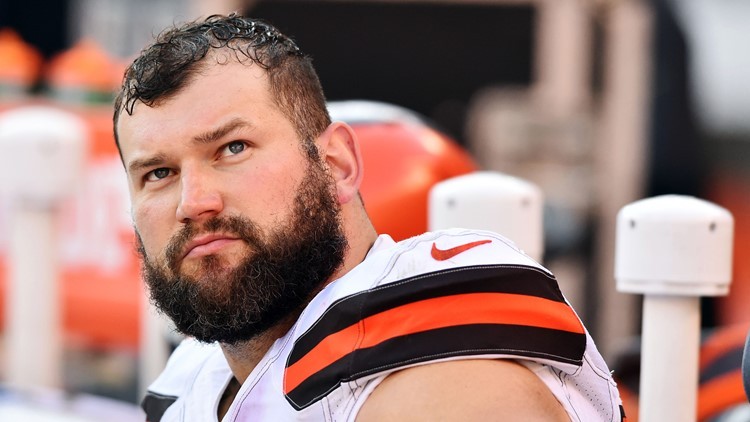 Joe Thomas may well be the finest left tackle in pro football history.

Before getting injured in the seventh game of the 2017 season, Joe Thomas started in all 167 games of his 11-year pro career.  Not only did he start every game, he never missed a snap.

That’s 10,363 consecutive plays — at left tackle – one of the most demanding and important positions in the game.  It is the longest consecutive-snaps streak in NFL history.

Before he went down with a torn triceps muscle in October 2017, the last time Cleveland didn’t have Joe Thomas at left tackle was December 31, 2006, when Charlie Frye was quarterbacking the Browns.

On a play called 13 Wilson – a weak-side running play from the shotgun – Thomas was trying to push away a Tennessee Titans’ linebacker when he felt a tendon snap in his elbow.  The NFL’s Ironman was done for the season.

Playing for the NFL’s lowliest franchise, Thomas blocked for more than 20 quarterbacks during the streak.  Current Browns quarterback, DeShone Kizer, was in fifth grade the last time the Browns had someone other than Thomas at left tackle.

Born in Brookfield, Wisconsin, December 4, 1984, Joseph Hayden Thomas was a three-sport standout at Brookfield Central High School.  A four-time letterman in both track and basketball, Thomas was the Wisconsin state champion in shot put and discus and captained the football and basketball teams as a senior.

The multi-talented Joe Thomas did everything on the football field at Brookfield, playing offensive tackle, defensive end, tight end, fullback, placekicker and punter for the Lancers.  Listed as a four-star recruit by Rivals.com, the high school Academic All-American turned down Notre Dame, Nebraska and Colorado to sign with Wisconsin in January 2003.

Thomas played offensive line and defensive end as a true freshman at Wisconsin.  He was named All-Big Ten as a junior, and was unanimous All-America as a senior.  In 2006, Joe Thomas became the first Badger in history to win the Outland Trophy as the nation’s top lineman.

An avid outdoorsman who later co-hosted Outdoors Ohio, Thomas opted to go fishing on the day of the NFL Draft.  Rather than go to New York City and attending the overhyped, made-for-TV circus that is the NFL draft, he and his dad went out on Lake Michigan.  Joe Thomas, who caught a 26-pound salmon when he was eight, learned he would be the Cleveland Browns new left tackle through the satellite radio on the boat.

“I did not want to miss that opportunity with my dad,” explained the humble Thomas.  “The NFL Draft is a show and they need characters in their show, they need actors.  And what’s better than cheap actors is free actors.  They become part of the soap opera of the NFL.”

Cleveland selected Thomas with the third overall pick of the 2007 draft, two spots behind quarterback Jamarcus Russell, who the Oakland Raiders took first overall.  Joe Thomas went on to become a perennial All-Pro and just the fifth player in NFL history to be selected to the Pro Bowl in each of his first ten seasons [joining hall-of-famers Barry Sanders, Lawrence Taylor, Mel Renfro and Merlin Olsen].  Conversely, Russell signed a $61 million contract — $32 million of it guaranteed – before going 7-18 in three miserable seasons in Oakland and disappearing from football.

Thomas had a breakout rookie season in 2007.  He became only the fourth first-year offensive lineman ever named to the Pro Bowl and finished second to Adrian Peterson as NFL Rookie of the Year.

The cerebral Joe Thomas, who was named to the Academic All-Big Ten Team three times, was a finalist for the Draddy Trophy as college football’s top scholar-athlete.  He quickly became the emotional leader of the Browns and was named co-captain in only his third pro season.

Thomas is revered in Cleveland, a city that appreciates his unrelenting, blue-collar work ethic, but the Browns are woeful.  Since his arrival along the banks of Lake Erie in 2007, Cleveland has gone 48-119 in the 167 games Joe Thomas has started, and posted just one winning season – in his rookie year.

The only offensive lineman in history to be named to the Pro Bowl in each of his first eight seasons, Thomas earned the Bruce Matthews Award in 2015 as the NFL’s top offensive lineman.  A three-time recipient of the Walter Payton Man of the Year Award, Joe Thomas’ ten Pro Bowl appearances are the most in franchise history, surpassing Jim Brown and Lou Groza, who have nine each.

A man of many talents, Number 73 hosts The Joe Thomas Hour: the Best Two Minutes of Your Life, which streams on the Cleveland Browns’ website.  He is also a devoted gardener, growing tomatoes, green beans, cucumbers and asparagus, but considers his prize veggie the Cajun belle pepper.