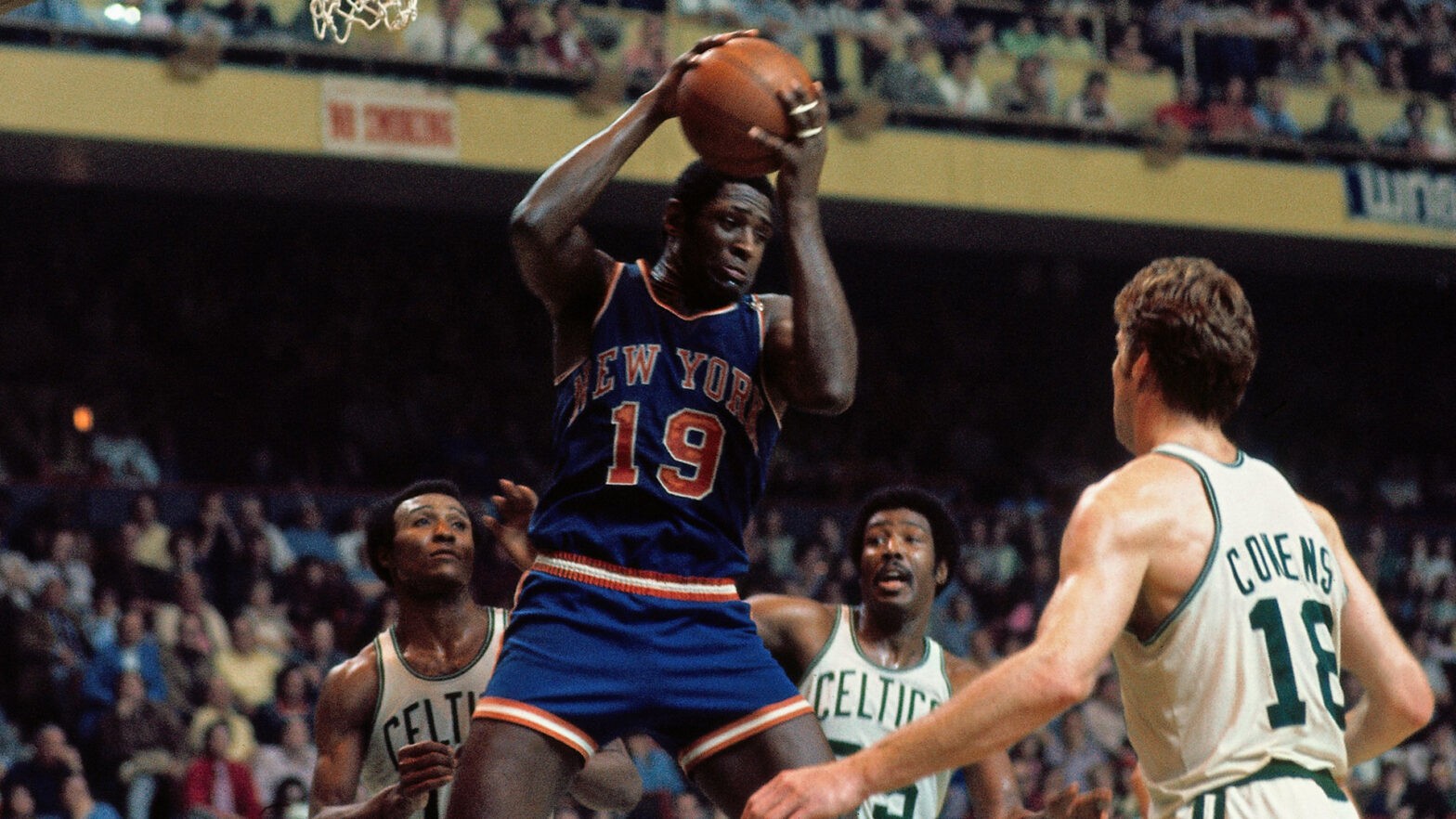 Willis Reed is the first NBA player ever named MVP of the regular season, All-Star Game and Finals in the same season.

In ten NBA seasons, Willis Reed played in seven All-Star Games while averaging 18.7 points and nearly 13 rebounds per game.  He captained the New York Knicks to the only two NBA titles in franchise history and was Finals MVP in both.  Voted 1965 NBA Rookie of the Year, Reed was the heart, soul, and backbone of the greatest Knicks teams of all time.

Willis was a working-class hero, a brawler who led with quiet determination.  The 6’9”, 240-pound left-hander presented problems for opposing defenders.  Reed, who scored 40 or more points five times in his career, could deliver soft jumpers and an occasional forearm shiver.  In his first seven seasons, Reed led New York in scoring five times and in rebounding six.  With The Captain clogging the middle and Walt Frazier pressuring the ball, the Knicks were the best defensive club in the league in five of six seasons during the Reed era.

Behind future Hall of Famers Frazier, Dave DeBusschere, and Bill Bradley, the Knicks won 60 games for the first time in franchise history in 1969-70.  After dispatching Earl Monroe’s Baltimore Bullets and the defending world champion Milwaukee Bucks in the first two rounds of the playoffs, New York faced the Los Angeles Lakers in the Finals.  The Lakers were stocked with superstars, including Elgin Baylor, Jerry West, and Wilt Chamberlain.

Willis Reed was born in Hico, Louisiana, a place “so tiny they don’t even have a population,” he said.

Born June 25, 1942, in a small Louisiana town near the Arkansas border, Willis Reed Jr. grew up on a farm in Bernice.  He started playing basketball as a 6’2” eighth-grader, honed his game at West Side High, then earned a scholarship to Grambling College.  After leading Grambling to an NAIA national title, the Knicks selected the three-time Little All-American in the second round of the 1964 NBA draft, signing him for $10,000.

After scoring 37, 29, 38 and 23 points, respectively, while averaging 15 rebounds in the first four games of the Finals, Reed suffered a muscle tear in his right thigh in the fourth quarter of Game 5.  The Knicks managed to survive that contest but, without Reed in Game 6, they suffered a 22-point thrashing by the Lakers in L.A.  Without Reed guarding him, Chamberlain poured in 45 points and grabbed 27 rebounds for the Lakers.  Tied at three games apiece, the teams squared off in a decisive Game 7.

On this date in 1970, the Knicks – and the 19,500 spectators in Madison Square Garden – were uncertain whether their leader would be able to play.  “We left the locker room for warm-ups not knowing if Willis was going to come out or not,” said Bradley.  “I didn’t want to have to look at myself in the mirror 20 years later and say I had wished I had tried to play,” Reed recalled, so he received painkiller injections in his thigh.

A Willis Reed Moment is synonymous with courage, with playing injured, with pushing through pain.

At 7:34 pm, Reed limped onto the court.  The sellout crowd erupted, and the Lakers stopped warming up to stare at Reed.  “When Willis stepped onto the court,” Bradley said afterward, “it gave us a ten-foot lift.”  Willis set the tone.  He outjumped Wilt on the opening tip and scored the first basket from the top of the key, then hit a second from 20 feet out.  Of all the thrilling baskets scored in NBA history, few have been more important than those two.

Although he only scored four points, Reed inspired his teammates in extraordinary fashion.  The Knicks were off and running.  New York led by as many as 29 points and won the game easily, 113-99.  Willis played 27 minutes, while Frazier was brilliant.  The third-year guard scored 36 points, dished out 19 assists, grabbed seven rebounds and had five steals.  “The scene is indelibly etched in my mind,” Frazier said of Reed taking the floor. “If that did not happen, I know we would have not won the game.”

Reed, who had earned MVP honors in both the regular season and All-Star Game, was named MVP of the Finals, capping off one of the most memorable seasons in NBA history.  The Captain’s gutsy Game 7 performance introduced a new phrase into the American sports lexicon: a Willis Reed Moment.  It was the defining event of Reed’s Hall of Fame career, and his limping onto the floor 49 years ago today has been voted the greatest moment in the storied history of Madison Square Garden.

“You exemplify the very best that the human spirit can offer,” Howard Cosell told Willis Reed in the winner’s locker room following Game 7.

Hobbled by bad knees, Reed retired 19 games into the 1973-74 season.  He coached the Knicks, served as head coach at Creighton University from 1981 to 1985, then guided the New Jersey Nets for three seasons.  In 1993, Reed moved to the front office and built the Nets into contenders, reaching the NBA Finals in 2002 and 2003.  Mr. Reed joined the New Orleans Hornets as VP of basketball operations in 2004 before retiring three years later.