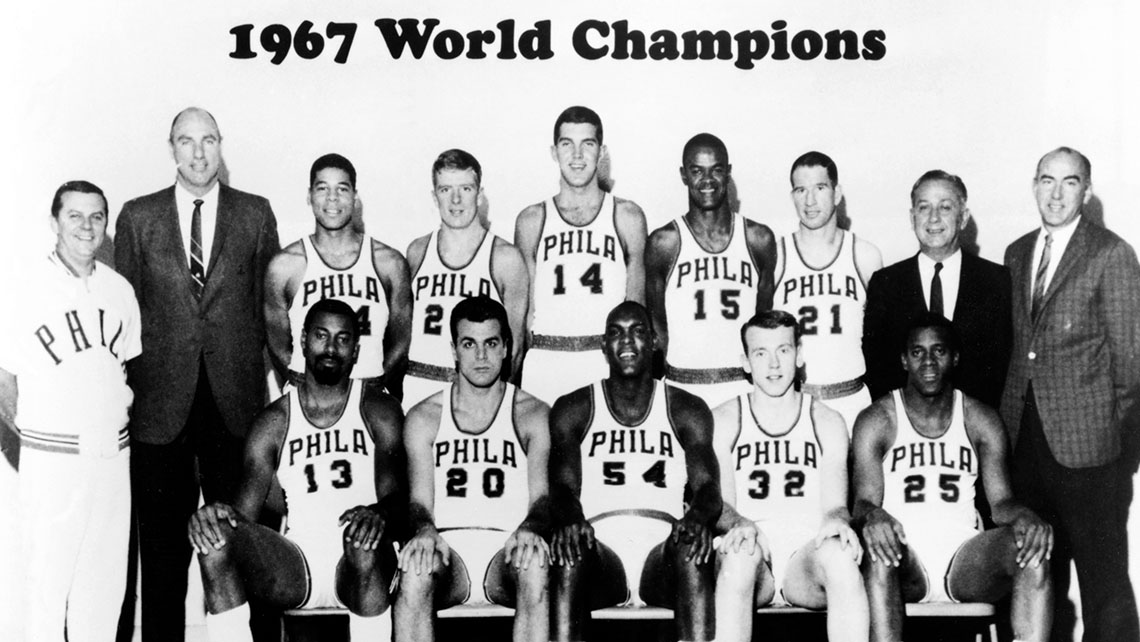 “The best team ever.  The best team I ever saw was the 1966-67 Philadelphia 76ers.”  — Wilt Chamberlain, who anchored the record-breaking NBA champion 1971-72 Los Angeles Lakers.

Before the Chicago Bulls of Michael Jordan and the modern-day Golden State Warriors, there was the 1966-67 Philadelphia 76ers.

The 1966-67 Sixers are not only the greatest team in Philadelphia sports history, they were voted the best team in NBA history during the league’s 35th anniversary celebration in 1980.  Propelled by Hall-of Famers Wilt Chamberlain, Hal Greer, Chet Walker and Billy Cunningham, they started the season 46-4 and went on to set a record for most victories in a season [broken in 1971-72 by Chamberlain’s Lakers].  Philly led the league in shooting percentage and assists.  In the 1967 playoffs, the 76ers steam-rolled through the Cincinnati Royals and Oscar Robertson, the Bill Russell-led Boston Celtics, and the Warriors of Rick Barry and Nate Thurmond.

Philadelphia went 68-13, compiling the best winning percentage [.840] in NBA history.  They averaged 125 points a game while shooting 48 percent from the floor, and held their opponents to just under 116 points per game.  An unstoppable squad with an immovable force, the Sixers featured a potent mix of veterans and youth, physical players who could score and defend.  The roster also included three future NBA coaches, two of whom guided their teams to world championships [Larry Costello led the Milwaukee Bucks to the 1971 NBA title, while Cunningham took the Sixers to the 1983 NBA crown.  Matt Goukas, who was Philly’s top draft pick in 1966, was an NBA head coach for seven seasons].

The offense ran through Chamberlain, who averaged nearly a triple-double in ’66-‘67 en route to his second-straight MVP award.  “Wilt transcended everyone and everything,” said Bill Melchioni, a rookie guard on the team.  “He was one of a kind.”  Starting guards Greer and Wali Jones created matchup problems for nearly every team in the league.  No one had the combination of athleticism and shooting touch as Philly.  The forwards were both All-Stars.  Chet “The Jet” Walker averaged over 19 points and eight rebounds a game, while Luke Jackson was a rugged defender.  Cunningham – the Kangaroo Kid – was the best sixth man in the league.  The 6’-7” second-year forward came off the bench to average 18.5 points in only 26 minutes per game.

The Philadelphia Warriors were a charter member of the NBA.  After the Warriors left for San Francisco in 1962, the Syracuse Nationals relocated to Philly the following season to become the 76ers.  After acquiring Chamberlain from the Warriors, Philadelphia finished the 1965-66 season with the best record in the NBA behind Wilt’s league-leading 33.5 points and 24.6 rebounds per game. They were quickly dispatched by the Celtics in five games during the Eastern Division Finals, and Boston went on to capture its eighth-straight NBA title.

Prior to the start of the 1966 season, Sixers owner Irv Kosloff made changes.  He hired former St. Joe’s coach Jack Ramsey as GM and fired head coach Dolph Schayes, whom Chamberlain had criticized both privately and publicly.  Schayes was replaced with Alex Hannum, 1964 NBA Coach of the Year and a no-nonsense leader who had co-existed peacefully with Wilt when both were in San Francisco.  Koslof also convinced Chamberlain – who commuted from New York – to move to Philly, providing his superstar a Ben Franklin Parkway penthouse.  He then hired Wilt’s closest friend, Vince Miller, to serve as scout, statistician and Chamberlain-tender for the upcoming season.

Philadelphia opened the campaign with a win over the New York Knicks, then sent a strong message five games into the season.  Facing the Celtics, who had captured nine of the ten previous NBA titles, the Sixers drubbed Boston, 138-96, to deliver the worst loss in the history of the league’s most storied franchise.  Philly went 46-4 in their first 50 games – still an NBA record – and lost only five more all season.  Of their 13 regular-season losses, five came at the hands of Boston, the Sixers greatest nemesis.

The 76ers were a smooth wrecking crew.  Greer and Cunningham were deadly mid-range shooters, freeing the middle for Chamberlain, whose eight assists per game set a record for centers.  Wilt averaged 45 minutes per game.  Shooting less, he made over 68 percent of his shots, best in league history and established the template for future good-passing big men like Bill Walton and Tim Duncan.  “Never once have I asked him to shoot less,” said Hannum of Chamberlain’s new-found team-oriented play.  “He just realizes now that he doesn’t have to do it all by himself.”

The landscape of professional basketball was much different in the mid-1960s than it is today.  The talent pool was more concentrated, as the ten-team league featured only 120 players, one-third the number of players in today’s NBA.  In 1995-96, the Chicago Bulls won an NBA-record 72 regular season games, bettering the mark of the 1971-72 Lakers.  The Bulls charged through a 29-team league and did not face any club more than four times.  The Sixers traveled a different path. “There were ten teams in the league then,” said Chamberlain shortly before his death in 1999.  “We were going up against Boston, the defending champion, nine times a year.”

After winning the Eastern Division by a whopping eight games, the Sixers ousted the Cincinnati Royals in four games, bringing on Boston.  In Game 1 against the Celtics, Chamberlain recorded a quadruple-double in a 127-113 win.  In Game 3, the four-time MVP grabbed 41 rebounds – a playoff record that still stands.  “When the big fellow was ready to play,” said Cunningham of the Big Dipper, “Nobody was going to stop him.”

Philly took a three-games-to-one lead into Game 5.  On April 11, 1967, more than 13,000 jammed into the Philadelphia Arena to see the 76ers finally clear the giant green hurdle known as the Celtics.  Greer poured in 32 points, Walker added 26 and Wilt hauled down 36 rebounds to vanquish Boston, 140-116.  Many in attendance lit cigars in mock tribute to the arrogant victory ritual of former Celtics coach Red Auerbach while chanting, “Boston is dead!”

The Finals were almost anticlimactic.  After winning the opener in overtime, the Sixers took three of the first four games.  Philadelphia failed to put away the pesky Warriors at home April 23, forcing the teams to fly across the country for Game 6 at the Cow Palace in San Francisco.  In Game 6, Chamberlain played the entire 48 minutes, and Wali Jones paced the Sixers with 27 points.  Philadelphia held on, 125-122, to claim the franchise’s second NBA title and first since moving to Philadelphia.  Alex Hannum, who had been the coach of the last team other than Boston to win an NBA Championship – the 1958 St. Louis Hawks – became the first coach to guide two different franchises to NBA titles.

The Philadelphia 76ers did not win another NBA title until 1983.  The 1967-68 squad again led the NBA in wins, but lost to Boston – who would win two more titles during the Russell era – in the semifinals.  After the 1968 season, Chamberlain was dealt to the Lakers and Walker was shipped to the Bulls.  Luke Jackson suffered a severe injury and was never the same player, and Ramsey replaced Hannum as coach.  Four teams have compiled greater regular season records than the 1966-67 Sixers, including the Lakers and Warriors.  The Chicago Bulls did it twice – in 1996 and again in 1997.

The greatest player in Philadelphia franchise history was born on this date in 1936.  Wilton Norman Chamberlain, who died in October 1999, would have turned 82 today.