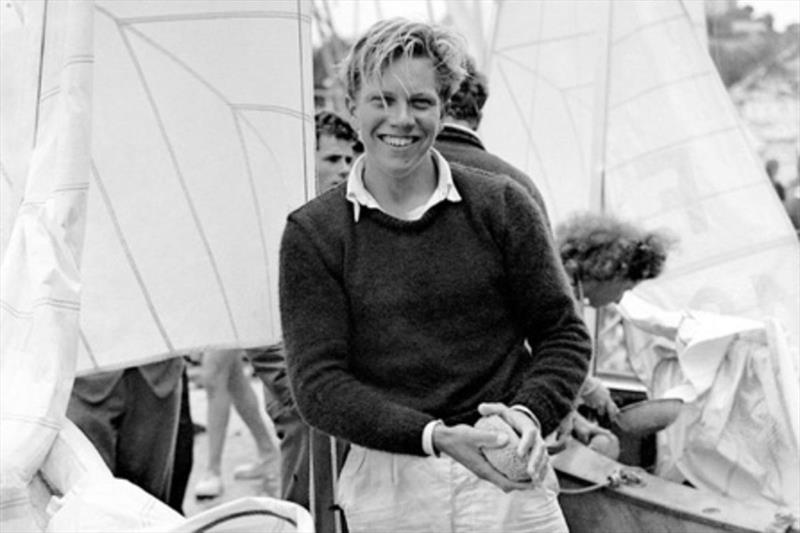 Paul Bert Elvstrom is one of only three Olympians to win the same individual event four times in a row. He is also one of only four athletes to compete in eight or more Olympic Games.

Born in Hellerup, Denmark—less than five miles from Copehagen–on February 25, 1928, Elvstrom competed in his first Olympics in 1948. The Games were held in London, but the yachting competition was held 215 miles away in the town of Torquay, on England’s south coast. The 20-year-old Elvstrom competed in the Firefly class and the event consisted of seven races, held over a span of nine days, on a triangular course covering six nautical miles. After five races, Elvstrom was in eighth place and trailed by over 800 points, then won his final two races to capture his first gold medal. Four years later, the Finn dinghy made its’ Olympic debut in Helsinki, replacing the Firefly in the single-handed class. Elvstrom won four of seven races to win his second gold medal by almost 3,000 points. The yachting competition in the 1956 Melbourne Olympics was held at Port Phillip Bay, a natural bay with ideal sailing winds located about eight miles from the main stadium of the Olympics. The course for the Finn class was circular and covered about six nautical miles, and Paul Elvstrom took the last four of the seven races in the program to win handily and claim his third Olympic gold medal. The “Patron Saint of Yacht Racing” entered his fourth consecutive Summer Games competition in 1960. The sailing races were held in the Gulf of Naples, about 135 miles from the host city of Rome, and the Finn class competition included 35 sailors, on 35 boats, from 35 nations. Elvstrom won three of seven races—never finishing lower than fifth in any one of them—to become the first competitor in any sport to win individual gold medals at four successive Olympic games.

Elvstrom also enjoyed success outside of Olympic competitions, winning eleven world championships in eight different types of boat, including Snipe, Soling, Star, Flying Dutchman and Finn. In addition, he won two silver and two bronze medals in world championship competitions between 1957 and 1985. He perfected the technique of “sitting out”—getting one’s entire body weight from the knees upwards outside the boat to enable the vessel to remain level and go faster—by using toe straps. This technique required great strength and fitness, so Elvstrom built a training bench with toe straps and spent many hours practicing his sitting out technique on dry land. He also popularized the “kicking strap” [boom vang in U.S.], a piston system that controls the mainsail, increasing the boat’s speed and controllability. Mr. Elvstrom was an innovator–developing a self-bailer that is commonly used today—and established a manufacturing company that made booms, sails, masts and the “Elvstrom” life jacket.

Paul Elvstrom returned to the Olympics in 1968 and 1972 but did not win a medal. In 1984, he sailed with his youngest daughter, Trine, in the Tornado catamaran class and narrowly missed the bronze medal. The pair became the first father-daughter crew ever to compete in the Olympics and went on to win the 1983-84 European championship in the Tornado class. The Elvstroms competed in the 1988 Summer Games in Seoul but did not medal. Paul Elvstrom is considered yacht racing’s guiding light and a man of great skill and integrity. He and was named Danish Sportsman of the Century in 1996 and, in 2007, was amongst the first six inductees to the International Sailing Federation [ISAF] Sailing Hall of Fame. Paul Elvstrom is the greatest yachtsman of all time.

“You haven’t won the race if, in winning the race, you have lost the respect of your competitors”– Paul Elvstrom