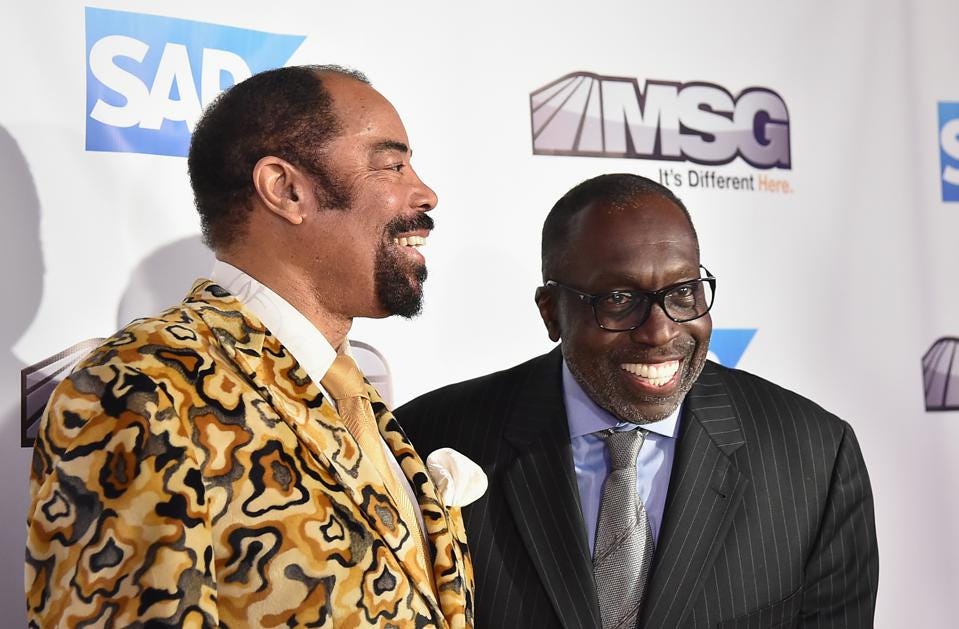 The last time the New York Knicks won an NBA championship they had two hall of famers in their backcourt.

Born in Philadelphia, Pennsylvania, on this date in 1944, Vernon Earl Monroe did not start playing basketball until he was 14.  He quickly became an urban legend, earning the nickname “Black Jesus” for the miracles he could perform while playing in the ultra-competitive Rucker playground league in South Philly.  Monroe matriculated to Winston Salem State, a College Division [now Division II] school in North Carolina, where he played for legendary coach Clarence “Bighouse” Gaines.  A high-scoring virtuoso, Monroe averaged over 41 points per game as a senior and led the Rams to the 1967 NCAA College Division title.  After being named College Division Player of the Year, the Baltimore Bullets selected the 6’4” point guard with the second pick of the 1967 NBA Draft, one spot behind Jimmy Walker, father of Jalen Rose, who would go on to star as part of the “Fab Five” at the University of Michigan [Daily Dose, 3/9/16].

“Earl the Pearl” was named 1968 NBA Rookie of the Year.  He quickly became one of the league’s most exciting players, a prolific scorer whose one-on-one moves were magical.  In 1971, he led the Bullets to the NBA Finals, where they were swept by Lew Alcindor [later Kareem Abdul-Jabbar] and the Milwaukee Bucks.  After four seasons in Baltimore, Monroe was traded to the New York Knicks three games into the 1971-72 campaign.

Walter Frazier was born in Atlanta on March 29, 1945.  The eldest of nine children, he attended all-black Davis Tobias Howard High School in the racially-segregated South of the 1950s.  Frazier starred in three sports in high school; football, basketball and baseball. He quarterbacked the football team, played catcher for the baseball team, and directed the basketball team from the point guard position.  He accepted a basketball scholarship to Southern Illinois University, where he was a College Division All-American in 1964 and 1965.  As a senior, Frazier led the Salukis to the 1967 NIT Championship in New York and was named MVP of the tournament.  The New York Knicks chose the 6’4” Frazier with the fifth pick of the 1967 NBA Draft—three slots behind Earl Monroe.  Later that year, both were named to the All-Rookie Team.

Frazier was flamboyant.  Wearing flashy suits and wide-brimmed hats, he was the original gangsta and was nicknamed “Clyde” after wearing a hat similar to the one Warren Beatty sported while playing Clyde Barrow in the 1967 film, Bonnie & Clyde.  Frazier became the floor leader, making his first All-Star team while leading the Knicks to the 1970 NBA title.  Clyde was brilliant in Game 7, scoring 36 points and handing out 19 assists to help the Knicks to their first title in franchise history.  New York, which featured Frazier, captain Willis Reed and versatile forward Dave DeBusschere [Daily Dose, 10/16/15] played the consummate team style of basketball.

Long before LeBron and D-Wade electrified the pro basketball world during the 2010-11 season, The Pearl took his talents to Madison Square Garden—the “World’s Most Famous Arena” [Daily Dose, 12/15/15—to play in New York City, basketball’s biggest stage.  The Knicks had two point guards but there was only one ball.  More than a clash of cool nicknames, it was a showdown of styles.  Dubbed the “Rolls-Royce Backcourt,” both superstars had serious egos, bringing the immediate question of whether the two could co-exist.  “Earl will fit right in,” predicted Knicks forward Bill Bradley [Daily Dose, 7/28/15].  “He’s a hell of a player.”  Monroe played his first year in New York with an injured heel and did not reach his full potential.  Nonetheless, the Knicks appeared in their second NBA Finals in three seasons before losing to the Los Angeles Lakers [Daily Dose, 11/5/15].  The following year, Monroe was asked to guard the other team’s best scorer, freeing up Frazier—a seven time member of the NBA’s All-Defensive Team–to steal the ball and block passing lanes.  A four-time All-Star, Monroe shaped his game to fit into the Knicks system.  “Earl had done everything but win a title,” said Frazier.  “Individual accolades were no longer utmost in our minds.”  The Pearl went from being a one-on-one superstar to being a superlative passer, underrated defender and unselfish team player.  “It was Walt’s team,” recalled Reed.  “Earl didn’t try to change that.”  After beating Boston in a grueling seven-game Eastern Conference series, New York easily beat the Lakers in five games in the NBA Finals.  It was the only championship of The Pearl’s professional career and the last in Knicks history.

Many consider the 1972-73 Knicks one of the finest teams of all time.  Frazier and Monroe found harmony to create one of the most formidable guard tandems in history.  “He [Monroe] came into a difficult, difficult position,” said DeBusschere. “He was a man with immense pride and intelligence who had to swallow his pride to adjust…one of them had to make the adjustment and Earl did it completely.”  In the Finals, both averaged 16 points per game with roughly the same number of assists.  Prior to coming to New York, The Pearl averaged nearly 24 points a game and 20 field goal attempts.  Three years into his tenure with the Knicks, Monroe averaged just under 14 points and 12 field goal attempts per game.  “People said we’d need two basketballs but they didn’t know the mutual respect we had as opponents,” observed Frazier. “When he came to the Knicks, the credit goes to Earl.  I didn’t have to change my game—he had to change.  And he did.  That was the character of Earl Monroe.”

Earl Monroe, who came into the league as Black Jesus and ended it as simply The Pearl, played 13 NBA seasons, nine with the Knicks.  Walt Frazier also played 13 pro seasons—ten in New York– and left as the Knicks all-time leader in several offensive and defensive categories.  He still has more assists than any player in franchise history.  Each retired following the 1980 season.  Both members of the Rolls-Royce Backcourt were enshrined into the Naismith Basketball Hall of Fame, the College Basketball Hall of Fame, and were named to the NBA’s 50th Anniversary All-Time Team.