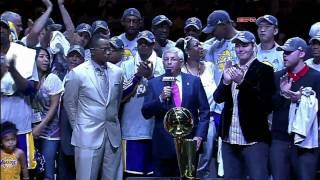 Since 1947, the National Basketball Association Finals is the league’s championship series.  The best-of-seven format pits the winners of the Eastern Conference and the Western Conference for the Larry O’Brien Championship Trophy.  The Celtics and Lakers alone own almost half the titles, having won a combined 33 of 70 NBA championships.

The NBA Finals have featured some of the greatest teams and finest players in basketball history.  In honor of the championship series, which ended with a Golden State sweep over Cleveland this past Friday night, we bring you the ten best Finals ever played.

1970, New York Knicks over Los Angeles Lakers.  Games 3 and 4 went into overtime.  After Knicks center Willis Reed suffered a severe thigh injury in Game 5, the regular-season MVP sat out Game 6 and Wilt Chamberlain poured in 45 points in a 135-113 Lakers victory.  Tied at three games apiece, the series returned to Madison Square Garden for a deciding Game 7.  In one of the most unforgettable moments in Finals history, Reed limped out of the tunnel minutes before tipoff to a thunderous ovation.  The Knicks captain scored the first two baskets of the game and returned to the bench.  Inspired by Reed and led by Walt “Clyde” Frazier, who tossed in 36 points and handed out 19 assists, the Knickerbockers won Game 7, 113-99, and their first world championship in franchise history.

1980, Los Angeles Lakers over Philadelphia 76ers.  The first five games were all about the vets, as Kareem Abdul-Jabbar averaged more than 33 points per game while Julius Erving paved the way for Philly.  In Game 4, the Doctor made an incredible baseline reverse layup that might be the greatest highlight in Finals history.  Youth prevailed in Game 6, when a 20-year-old rookie by the named of Earvin Johnson filled in for Jabber, who had injured an ankle in Game 5.  Johnson played all five positions and totaled 42 points, 15 rebounds and seven assists in a 123-107 Lakers victory.  It marked the beginning of the Showtime dynasty, as L.A. made eight Finals appearances – winning five – during the decade.

2016, Cleveland Cavaliers over Golden State Warriors.  Golden State gained home-court advantage after posting the best regular season record [73-9] in NBA history.  In a rematch of the 2015 Finals, the defending champion Warriors won the first two games decisively and held the Cavs and the series by the throat.  A 108-97 victory in Game 4 gave Golden State a 3-1 series lead that appeared insurmountable.  Enter LeBron James, who showed why he is the most dominant player in the league.  Playing nearly 42 minutes per night, King James willed the Cavs to three wins in a row to capture Cleveland’s first championship in any sport since 1964.  LeBron averaged 30 points, 11 rebounds and nine assists over the seven-game series to earn his third Finals MVP award.

1969, Boston Celtics over Los Angeles Lakers.  The defending world champion Celtics were aging.  After finishing fourth in the East, they came into the Finals as underdogs.  In Wilt’s first year in L.A. and Russell’s last season, six of the series’ seven games were decided by single digits.  Jerry West was brilliant, notching a triple double in Game 7 that included 42 points, 13 rebounds and 12 assists.  Boston held on to win, 108-106.  West was so good he was named Finals MVP, the only time in history an MVP came from the losing team.

1998, Chicago Bulls over Utah Jazz.  After losing Game 1 in overtime, Chicago rallied to win three straight, including a 96-54 Game 3 thumping that remains the biggest blowout in Finals history.  The Jazz bounced back to win Game 5.  With 21 seconds left in Game 6, Michael Jordan took over.  MJ stole the ball from Karl Malone then buried a jumper over Byron Russell to give the Bulls the win.  It was the last great moment from the game’s greatest player, as Jordan finished with 46 points while earning the sixth title and sixth Finals MVP award of his career.

1988, Los Angeles Lakers over Detroit Pistons.  The Lakers were nearing the end of their run but were still defending NBA champions.  The series showcased a stark contrast between the up-tempo flash of the Showtime Lakers and the gritty, physical style of the Bad Boy Pistons.  Detroit held a 3-2 lead as the series went back to L.A.  Channeling Willis Reed in Game 6, Pistons guard Isiah Thomas scored 43 points – 25 of them in the third quarter –  after badly twisting his ankle.  Despite Thomas’ heroics, the Lakers eked out a win to extend the series.  In Game 7, James Worthy showed why his nickname was Big Game James, tallying 36 points, 16 rebounds and ten assists to give the Lakers a 108-105 win in the final championship of their dynasty.

2013, Miami Heat over San Antonio Spurs.  Leading 94-89 with less than 30 to go, the Spurs should have won Game 6.  Instead, Ray Allen’s icy dagger from the corner sent the game into overtime, won by Miami.  This star-studded series included Tim Duncan, Mano Ginobili, Tony Parker, LeBron James, Dwayne Wade and Chris Bosh.  A Game 7 victory gave the Heat their second straight title.  James averaged 25 points and 11 rebounds per game and was named Finals MVP.  In a rematch the following year, San Antonio beat Miami in five games.

1984, Boston Celtics over Los Angeles Lakers.  In a series that marked the jumping off point for the Golden Age of NBA basketball, this was the first championship game matchup between Larry Bird and Magic Johnson since the 1979 NCAA title game.  In Game 4, Kevin McHale clotheslined Kurt Rambis, starting a brawl.  Bird was ridiculous, averaging 27.4 points, 14 rebounds and nearly four assist per game in the series.  Larry Legend was named Finals MVP after the Celtics prevailed in Game 7.  These two teams – and two superstars – would provide a decade-long rivalry that led to an explosion in the NBA’s popularity.

1994, Houston Rockets over New York Knicks.  One of the most bizarre evenings in televised sports history occurred June 17, when Game 5 was overshadowed by O.J. Simpson’s slow speed freeway chase with the LAPD.  Coverage was presented on split screen in most markets, while KNBC in Los Angeles left game coverage completely to follow the surrealistic events of the Simpson fiasco.  The series featured two of the best centers in NBA history.  In a rematch of the 1984 NCAA title game, when Patrick Ewing’s Georgetown Hoyas had beaten Hakeem Olajuwon and his Phi Slama Jama Houston Cougars, Olajuwon got revenge.  In a low-scoring series, The Dream dominated Patrick, delivering the Rockets their first NBA title in franchise history.

1993, Chicago Bulls over Phoenix Suns.  Charles Barkley won the only MVP of his career in 1992-93, when he led the Suns to a league-best 62 wins in his first year in the desert.  Phoenix lost Games 1 and 2 at home before taking Game 3 in an overtime thriller in Chicago.  Michael Jordan exploded for 55 points in Game 4, the only time the home team won during the entire series.  With seconds left and the Bulls trailing by two in Game 6, John Paxon silenced the Phoenix crowd to take the game and the series.  It was the first of two career three-peats for MJ, who was named Finals MVP.