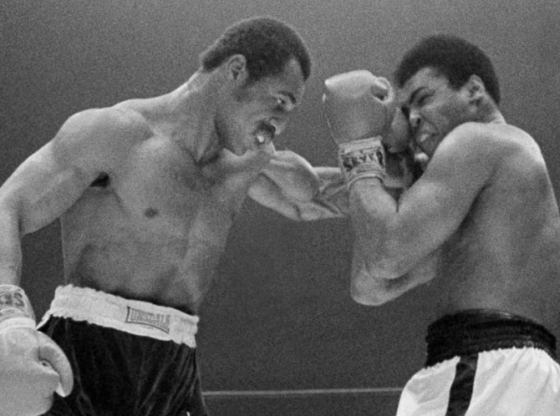 Ken Norton is the only heavyweight champion never to win the title in the ring.

One of the standouts of the talent-filled 1970s heavyweight division, Norton was a great fighter in the ring and a fine person outside it.  A professional boxer from 1967 to 1981, Norton’s three fights with Muhammad Ali are his real legacy.  He gave Ali, whom many consider the greatest heavyweight in history, three of his closest fights.  Norton won the first of the trilogy by split decision, then controversially lost the next two by split and unanimous decision, respectively.  Standing 6’3” with an 80-inch reach, Norton was chiseled and powerful.  WBC Heavyweight Champion from 1977 to 1978, the “Fighting Marine” was a late bloomer.  Like Kurt Warner, who went from supermarket stock boy to Super Bowl MVP at 28, Norton did not gain notoriety until 30, when he whipped Ali on national television and sent “The Greatest” to the hospital with a broken jaw.

Voted by The Ring magazine as number 22 on its list of “50 Greatest Heavyweights of All Time,” the lean and muscular Norton was 42-7-1 as a professional, 33 by knockout.  Fighting in the last great era of heavyweight boxing, a period that included Ali, Joe Frazier, George Foreman and Larry Holmes, Norton twice claimed the North American Boxing Federation title and was WBC Heavyweight Champion for seven months.  Although he lost to Ali, Foreman and Holmes, Norton beat some of some of the top contenders of his day, including Jimmy Young, Jerry Quarry and Duane Bobick.

Born in the small central Illinois town of Jacksonville on this date in 1943, Kenneth Howard Norton Sr. was a superb athlete.  An All-State football player at Jacksonville High School, he also played basketball and ran track for the Crimsons.  In one meet, Norton won seven of the eight events he entered, leading the Illinois High School Association to implement the “Ken Norton Rule,” which limits athletes to a maximum of four track and field events per meet.  Norton earned a football scholarship to Northeast Missouri State [now Truman State] University but left after two years to join the Marines.  Bored with getting up for reveille every day, he took up boxing in 1963 and became the best fighter in the history of the Marines Corps.  Over the next four years, Norton compiled a 24-2 record and won three All-Marine heavyweight titles.

After qualifying for the Pan Am Games team and winning the 1967 National AAU title, Norton turned pro.  He made his debut in November 1967 in his adopted hometown of San Diego, stopping Grady Brazell in five rounds.  Norton won his next 15 fights before being knocked out by Jose Luis Garcia in July 1970.  By the end of 1972, he had run his record to 29-1.

Two years after suffering the only loss of his career to Joe Frazier in the “Fight of the Century”, Muhammad Ali was looking for a tune-up fight in his quest to reclaim the heavyweight title.  Promotors tapped Norton, who was offered $ 50,000 for the bout, slated for March 31, 1973.  Calling the match for a national TV audience on ABC’s Wide World of Sports, boxing commentator Howard Cosell said it was “the worst mismatch in boxing history and a disgrace.”  Norton was installed as a 5-1 underdog, but his unorthodox style – including a trademark cross-armed defense – baffled Ali.  Featuring a vicious left hook and thunderous overhand right, the former Marine punished Ali, breaking his jaw and earning a 12-round split decision and the NABF heavyweight title.  Known as “Black Hercules” coming into the fight, Norton was dubbed “The Jawbreaker” after handing Ali just the second loss of his career.  “Kenny, you made me look silly,” Cosell admitted after the bout, to which Norton replied, “That’s OK, Howard, you always look silly.”

Six months after their first fight, Norton and Ali met in a highly anticipated rematch.  Ali was more fit than he’d been in the first meeting, while Norton may have over-trained, coming in five pounds lighter than he was when the two met in San Diego.  The bout went the distance, with Ali out-pointing Norton to win a controversial 12-round split decision.  In March 1974 – one year after beating Ali – Norton faced Foreman, who had taken the heavyweight title from Frazier 14 months earlier.  Unlike Ali, Foreman was not baffled by the challenger’s unorthodox style and dropped Norton three times in the second round before the referee stopped the fight.

After beating his next seven opponents, Norton and Ali squared off for a third and final time at Yankee Stadium in September 1976.  Ali had regained the heavyweight crown after “rope-a-doping” Foreman two years earlier in Zaire.  In an epic ending to their trilogy, the two warriors lasted 15 rounds, with Ali narrowly winning another controversial decision to retain the title.  A year-and-a-half later, Leon Spinks beat Ali in a stunning upset to take the heavyweight title.  The WBC ordered a match between the new champion and its number one contender, Norton.  Rather than face Norton, Spinks opted to give Ali a rematch.  The WBC responded by retroactively giving the heavyweight title to Norton, who had beaten Jimmy Young In November 1977.

In his first title defense in June 1978, Norton met top contender Larry Holmes.  It was one of the greatest heavyweight titles fights of all time, with Holmes out-pointing the champ in a slug-fest to win a close split decision.  Two judges scored the fight 143-142 in favor of Holmes, while the third scored it 143-142 for Norton.  Holmes, who would retain the title for more than seven years, later called it the toughest fight of his career.  It was Norton’s last hurrah, as he won only two of his last five bouts before hanging up the gloves in 1981.

Norton retired from boxing unscathed.  Handsome, articulate and funny, he worked as an actor, boxing commentator and public speaker after stepping away from the brutal sport at 37.  In 1986, he suffered a near-fatal car accident, leaving him with slow and slurred speech.  Norton had to learn to walk and talk again, and his condition led to a series of strokes later in life.  Mr. Norton died at a care facility in Las Vegas in September 2013.  He was 70.

Ken Norton, who told ESPN Fitness Magazine he would have become a teacher or policeman had he not taken up boxing, was twice voted “Father of the Year” by the Los Angeles Times.  The former WBC and NABF champ later said, “Of all the titles that I’ve been privileged to have, the title of ‘Dad’ has always been the best.”  One of his sons, Ken Norton Jr., was a three-time Pro Bowler who played 13 seasons in the NFL.  He is the only player in league history to win a Super Bowl ring in three straight years [1993 and 1994 with Dallas, 1995 with San Francisco].  A talented linebacker, “Junior” scored two defensive touchdowns in his NFL career.  Two of the greatest end zone celebrations in pro football history took place after each, when Norton honored his father by striking a boxing pose and throwing a combination at the goalpost pad.

A member of the International Boxing Hall of Fame, World Boxing Hall of Fame and Marine Corps Hall of Fame, Norton was voted “Fighter of the Year” by the Boxing Writers Association in 1977.  In 2001, he was elected to the San Diego Hall of Champions, honoring the city’s finest athletes both on and off the field.  A decade later, Mr. Norton – whom former heavyweight champion George Foreman called “the fairest of them all” — was voted into the California Sports Hall of Fame.