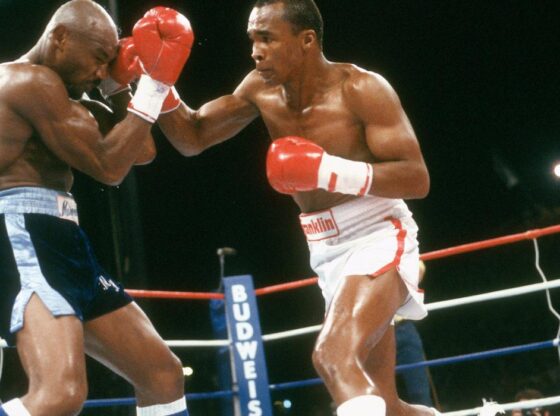 Over the course of his 20-year career, Leonard won the welterweight, middleweight, junior middleweight, super middleweight, and light heavyweight divisions.  He was the whole package, combining superb boxing skills with good looks and charisma that made him one of the most compelling figures the Sweet Science has ever produced.  Possessing blinding speed, tremendous power, stamina and toughness, Leonard beat some of the finest boxers of the modern era.  Handsome, charming and spectacular in the ring, Leonard was not just a boxing star, but an international sports star.  After winning the 1976 Olympic gold medal, Howard Cosell dubbed Leonard the “next Muhammad Ali,” and the comparison proved to be spot on.  A media favorite, Leonard was the sport’s biggest draw and became the first boxer to win more than $ 100 million in purses.

Born in Wilmington, North Carolina – birthplace of basketball’s Michael Jordan, musician Charlie Daniels and former President Woodrow Wilson – on this date in 1956, Ray Charles Leonard is the fifth of seven children.  Cicero Leonard was a supermarket manager and his wife, Getha, was a nurse who named her son after favorite singer — Ray Charles.  The family moved to Washington, D.C., when Ray was three before settling in Palmer Park, Maryland, in 1966.  A marginal athlete, Leonard followed the lead of his two older brothers and took up boxing at the Palmer Park Community Center.  Quick, deft and eager to learn, he was hooked at 14.  “I felt it in me,” explained Leonard, “ and I had to keep going.”

In 1973, Leonard won the National Gold Gloves Lightweight Championship.  The following year, he successfully defended his Golden Gloves crown and added the AAU lightweight title.  After claiming another AAU championship and the Light Welterweight Championship at the 1975 Pan Am Games, Leonard earned a spot on the 1976 U.S. Olympic Team, considered by many as the greatest boxing team in the history of the Olympics.  “When I first started, I used to fight like Joe Frazier.  I would come in low, bob and weave, and I knocked many guys out like that.”  said Leonard.  “Then I started studying Sugar Ray Robinson.”  Leonard’s reverence for Robinson –  the greatest fighter of all time – ran so deep that he took the nickname, Sugar Ray, which stuck.  Despite hand injuries, the 139-pound Leonard easily won all six of his Olympic matches by identical 5-0 scores – including the final against Cuba’s Andres Aldama — to claim the light welterweight Olympic gold medal.

Leonard wanted to hang up his gloves after the 1976 Olympics, cash in on his success in Montreal, and accept a scholarship offer to attend the University of Maryland.  After a paternity suit filed by his high school girlfriend squelched endorsement opportunities and his parents fell ill and were unable to work, he decided to turn pro.  In February 1977, 20-year-old Ray Leonard made his professional debut in Baltimore’s Civic Center, winning a six-round unanimous decision over Luis Vega.  Less than three years later, he beat Wilfred Benitez with a 15th round TKO to claim the WBC welterweight title en route to being named The Ring magazine’s 1979 Fighter of the Year.

In June 1980, Leonard – with a record of 27-0 — returned to the site where he had achieved Olympic glory when he faced Roberto Duran in a fight dubbed as The Brawl in Montreal.  With a record of 71-1, Duran had been undisputed world lightweight champion for more than six years and was considered, pound-for-pound, the best fighter in the world.  Duran won a unanimous decision to hand Leonard his first loss as a pro and claim the welterweight belt.  Duran’s glory would be short-lived.  Four months later in the Superdome,  Leonard reclaimed the title after the Panamanian famously said, “No Mas,” and quit in the waning seconds of the eighth round.

In a September 1981 match promoted as The Showdown, Leonard stopped undefeated Thomas “Hitman” Hearns to take the WBA welterweight title.  He was named 1981’s “Fighter of the Year,” Wide World of Sports “Athlete of the Year,” and earned “Sportsman of the Year” honors from Sports Illustrated.  After successfully defending his title in early 1982, Leonard underwent surgery to repair a detached retina and announced his retirement.  Missing the limelight, he returned to the ring in May 1984, where he was knocked down for the first time in his career by Ken Howard, a journeyman from Philadelphia, before winning the bout.

The 1980s were a golden age for the welterweight and middleweight divisions of boxing.  The era was headlined by four of the all-time greats – the Fabulous Four – which included Leonard, Duran, Hearns and Marvelous Marvin Hagler.  Between 1980 and 1985, each of them fought all the others, except for Hagler and Leonard.  When they finally clashed in 1987, it was the climax of an extraordinary series – and the end of an era, as it was the last great middleweight fight that mattered.

Looking back on his 50 years in boxing, commentator Tim Ryan said the most anticipated fight he had ever seen was the Fight of the Century –  the first Ali-Frazier matchup, in March 1971.  According to Ryan, Leonard – Hagler was a close second.  The 32-year old Hagler was a rugged, blue-collar brawler who had waited for the fight for years.  Leonard, 30, was coming off a three-year retirement and was moving up two weight classes.  The champion Hagler was making his 13th title defense, while Leonard had fought just once in the previous five years.  Marvelous Marvin was considered unbeatable, while Sugar Ray was given little chance.

The Super Fight took place April 6, 1987, at Caesars Palace in Las Vegas.  Leonard was guaranteed $ 11 million and Hagler $ 12 million in a fight that would gross $ 78 million [more than $ 170 million today].  In one of the most exciting bouts of all time, Leonard threw 629 punches and landed 306, while Hagler threw 792 and landed 291.  Leonard was awarded a controversial 12-round split decision, sparking debate that rages more than 30 years later as to who truly won the fight.

Following a brief respite from boxing, Leonard returned to the ring to battle Hearns to a draw in June 1989.  Six months later, he beat Duran for the second and final time in their famed trilogy.  Leonard went down to 154 pounds to fight Terry Norris in 1991, where he lost a lopsided decision for the WBC Light Middleweight title.  In March 1997, and following a six-year layoff, the 40-year-old Leonard fought Hector “Macho” Camacho for the IBC middleweight belt.  Both fighters were well past their prime, but Camacho dropped Leonard in the fifth and the referee stopped the fight later in the round.  It was the only time in Leonard’s career that he was knocked out, and the former champion retired for good after the fight.

Ray Leonard was 36-3-1 in 40 professional fights, 25 by knockout.  At a time when welterweight and middleweight boxing was at its peak, Leonard’s battles against Benitez, Hearns and Duran were epic, and his 1987 match with Marvelous Marvin Hagler is one of the greatest in history – in any weight class.  At 5”, 10” and with a 74-inch reach, Sugar Ray was worthy of his nickname.  In 360 professional rounds, Leonard knocked out 63 percent of his opponents.  Like many boxers, he stayed in the game too long, losing his final two matches.  After retiring permanently in 1997, he was inducted into the International Boxing Hall of Fame.  Mr. Leonard has served as a boxing commentator, the pitchman for several companies, and appeared on Dancing With the Stars in 2011.  He is ranked as the 12th greatest boxer of all time, 11 spots behind the original “Sugar,”  the great Ray Robinson.