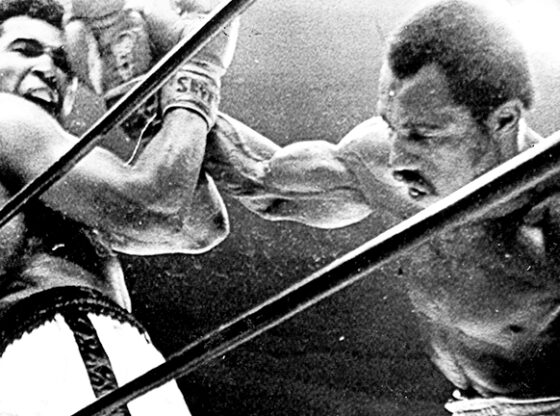 The 1970s were the heyday of heavyweight boxing.

The greatest heavyweight boxing decade in history was dominated by some of the best fighters of all time.  Four of the top ten heavyweights ever to step into a ring [as voted in 2017 by a panel of experts from The Ring magazine] fought in the 1970s.  Three of them – Muhammad Ali [#1], George Foreman [#7] and Joe Frazier [#8] defined the sport’s Golden Age.

The heavyweight division was loaded in the 70s.  George Chuvalo, Ron Lyle, Oscar Bonavena, Jerry Quarry and Ernie Shavers all might have held the belt in other eras.  Jimmy Ellis was champion for the first 75 days of the decade, and Ken Norton, Larry Holmes, Leon Spinks, and John Tate all owned the heavyweight crown at one time or another during the 1970s.

The Big Three all attained Olympic fame in the ring.  Fighting as Cassius Clay, Muhammad Ali won the light heavyweight gold medal in Rome in 1960.  Joe Frazier took heavyweight gold at the 1964 Tokyo Games, then George Foreman did the same in Mexico City in 1968.

Cassius Clay first captured the heavyweight title in 1964 with a stunning upset of Sonny Liston.  Soon after the fight, Clay changed his name to Muhammad Ali.  After dodging the draft, Ali was stripped of his titles in 1967 and spent the last years of the decade inactive.  It was a tumultuous time in America, with protests raging over civil rights as well as the war in Viet Nam.  At the epicenter of this turmoil was Ali, who deemed himself a conscientious objector and refused Army induction.  As the decade dawned, the former champion returned to the sport to face the most competitive crop of heavyweights in history.

Following a reinstatement of his boxing license, Ali returned to the ring in October 1970, stopping Quarry in three rounds.  Six weeks later, he took a beating while earning a 15th round TKO over Bonavena.  In March 1971 – less than five months after climbing back into the ring – Ali met Frazier for the first of their three career fights.

Joe Frazier met and beat all of the great heavyweights of his era except Foreman, his nemesis.  Frazier ushered in the decade holding the NYSAC title that Ali vacated in 1967.  In February 1970, he stopped WBA and WBC champion Jimmy Ellis in five rounds at Madison Square Garden to add those belts to his cache.  A little over a year later, Frazier and Ali met in the Fight of the Century – the most anticipated heavyweight bout in history.  Smokin’ Joe retained the title, flooring Ali with his signature left hook in the 15th to win a unanimous decision and settle the long-running debate over which fighter was the true heavyweight champion.

George Foreman won Olympic gold in 1968 and quickly rose through the heavyweight ranks.  In January 1973, the tough Texan captured the heavyweight title by handing Frazier his first professional loss in the Sunshine Showdown in Jamaica.  Foreman’s dismantling of the seemingly-invincible Frazier remains one of the most stunning heavyweight title wins in history.  Big George battered the champ, dropping him six times in the first two rounds before the fight was mercifully stopped.

Following the Fight of the Century, Ali dispatched Ellis, Chuvalo, and Quarry.  Perhaps the best heavyweight never to win the title, Irish Jerry featured a lethal left hook and regularly knocked out bigger, stronger fighters he was expected to lose to.  Eyeing a rematch with Frazier, Ali scheduled a tune-up in March 1973 with the unheralded Norton, an ex-Marine with an unusual stance and cross-armed defense.  The riveting Ali – Frazier rematch was derailed, however, when Frazier was blasted by Foreman in Jamaica, then Ali lost a decision to Norton two months later.

After making quick work of Jose Roman and Ken Norton in his first two title defenses, Foreman faced Ali in The Rumble in the Jungle.  In what has been described as “arguably the greatest sporting event of the 20th century,” Ali dropped the heavy-hitting Foreman in a monumental upset to reclaim the heavyweight title he had lost seven years earlier.  For the rest of the decade, Ali remained the biggest sports star on the planet.

Forman pummeled Frazier again in 1976 but was unable to get another title shot.  Big George retired in 1977 after getting out-boxed by Jimmy Young.  He stayed away for a decade before returning for one of the most improbable comebacks ever in 1987.  There were two iterations of George Foreman.  The 70s version was a brooding bully.  The second introduced a kinder, gentler George, who went on to knock out undefeated Michael Moorer in 1994 to reclaim the heavyweight title at 45.  Foreman retired for good in 1997.

Ranked the eighth greatest heavyweight in history by The Ring magazine, Frazier was just 8-4 during the decade.  Two losses came at the hands of Foreman, a brutal matchup for Smokin’ Joe.  The other two came against Ali in epic fights.  If Frazier was Ali’s most difficult opponent, Norton was a close second.  The Black Hercules broke Ali’s jaw and won the decision in their first fight, then was outpointed in two close decisions.  To some observers, Norton beat the Louisville Lip in all three of their career fights.

Following The Rumble in the Jungle in Zaire, Ali defended the title ten times, including wins over Lyle, Chuck Wepner, Joe Bugner, Jimmy Young, Shavers, Norton, and Frazier.  He held the belt for 41 months before facing Leon Spinks in Las Vegas in February 1978.  Spinks, who had only seven pro fights to his credit after capturing light-heavyweight gold in Montreal less than two years earlier, outpointed the woefully undertrained Ali to take the title.  The 36-year-old Ali won a unanimous decision in a rematch seven months later to capture the crown for the third time in his career.

The first Ali-Frazier fight was the most highly publicized and anticipated fight of all time.  Their last – 1975’s Thrilla in Manila – was the greatest.

In the early 70s, Larry Holmes served as a sparring partner for Ali, Frazier, Shavers, and Young.  He turned pro in 1973 and earned a title shot against Norton after upsetting Shavers in March 1978.  Featuring a power jab and heavy right hand, Holmes took the WBC title from Norton in June 1978.  The Easton Assassin then held it until losing to Michael Spinks in 1985.  The Ring ranked Larry Holmes the fifth-greatest heavyweight in history in 2017.

The heyday of heavyweight boxing unfolded with the reign of Smokin” Joe and closed with that of The Easton Assassin.  And the constant through it all was The Greatest.  Ali first ruled the heavyweights in the 1960s, then lost his titles in 1967 as a result of choices he made outside the ring.  He recaptured the crown in 1974, lost it in February 1978, then claimed the most prestigious title in boxing seven months later.  In all, Ali held the world heavyweight title three times during his career, losing it for the final time as the decade expired, in October 1979.

Sadly, heavyweight prizefighting is a mere shadow of its former self.  The sport is rudderless and awash in corruption.  Each of the Big Three of the 1970s first gained notoriety as Olympians, then rose through the professional ranks one fight at a time before ultimately attaining greatness.  The last American to win Olympic heavyweight gold was Ray Mercer, in 1988.  Gone are the must-see marquee matchups that captivated audiences around the globe while setting viewership records and earning hundreds of millions of dollars.  Today’s fight game is a travesty and the heavyweight division is nearly non-existent.  Muhammad Ali was the most visible athlete in the world in the 1970s – in any sport.  Today, most sports fans cannot even name the heavyweight champion of the world.

On this date in 1974, undefeated world heavyweight champion George Foreman fought challenger Muhammad Ali, the former champion, in The Rumble in the Jungle.  The fight drew 60,000 people to Stade Tata Raphael in Zaire [now Democratic Republic of the Congo].  The 32-year-old Ali, who came in as a 4-1 underdog, employed a rope-a-dope tactic to fatigue his stronger, younger opponent.  Before an estimated one billion television viewers worldwide, Ali pulled off one of the biggest upsets in history, knocking Foreman out just before the end of the eighth round to claim the title for the second time in his career.