Fight of the Century 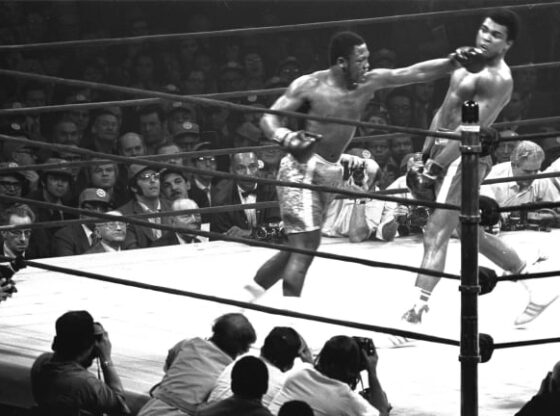 Muhammad Ali and Joe Frazier staged three of boxing’s fiercest battles. The most famous was their first meeting, accurately billed as the Fight of the Century.

On this date in 1971, Joe Frazier and Muhammad Ali met in what is perhaps the most anticipated event in sports history. It transcended sport and embodied the culture war taking place in America at the time. The match pitted Ali—the former champion, best-known figure in the world and cultural icon–against Frazier, a blue-collar brawler who had beaten Jimmy Ellis 13 months earlier to claim the heavyweight title. It was the first time in history that an unbeaten former champ faced an unbeaten current champion. Frazier entered the fight 26-0 and Ali came in 31-0, with 25 knockouts. The storyline for the Fight of the Century went much deeper than two undefeated heavyweights clashing for the title belt. It added dimensions of politics, religion, and race.

The 1960s was the most divisive decade in America since the Civil War 100 years earlier. It was a period of unrest, with the Vietnam War, the Civil Rights Movement, Hawks, Doves, flower children, Black Power, Kent State, Woodstock, Hard Hats and the silent majority dominating the landscape. Martin Luther King and Bobby Kennedy were murdered two months apart in the first half of 1968. It was against this backdrop that one of boxing’s greatest rivalries emerged.

Cassius Clay had won a gold medal as a light heavyweight at the 1960 Summer Olympics in Rome and heavyweight championship of the world at age 22, when he defeated the seemingly invincible Sonny Liston. Colorful, engaging, and quick-witted, Clay was the master showman, spouting poetry and predicting the round in which his opponent would fall. After taking the heavyweight title from Liston in 1964, he announced he had converted to the Nation of Islam [known then as Black Muslims]and changed his name to Muhammad Ali. With the Civil Rights Movement in full throat, Ali preached that the white man was the devil, and he became a symbol of racial pride for African Americans. In 1966, two years after winning the heavyweight title, he further antagonized the white establishment by refusing induction into the U.S. Army. Claiming conscientious objector status on the grounds that his religion forbade him from participating in a war, he was denounced as a draft dodger, and many questioned his patriotism and motives. In June 1967, when Ali was convicted of draft evasion and sentenced to five years in prison, the counter culture had a new hero.

Joe Frazier was also an Olympic champion, having won the heavyweight gold medal in the 1964 Tokyo Games. A human wrecking ball, he had risen to the top of the heavyweight heap like an unstoppable force of nature. Using his left hook like a meat cleaver, “Smokin’ Joe” had knocked out 23 of his 26 opponents. Frazier was the perfect foil for Ali, as his style was in marked contrast to that of the challenger. Smokin’ Joe was a puncher, with a devastating left hook and indomitable will. A fight with Frazier was a war of attrition. Ali was a boxer, possessing lightning fast hands and clever footwork that allowed him to escape danger. While Ali seemed to embody the culture of the 60s, Frazier was cast as pro-establishment. Despite being the son of a South Carolina sharecropper and growing up in the ghettos of New York and Philadelphia, Frazier was portrayed as the “white man’s champion.”

In 1967, Ali was stripped of his world heavyweight title for his refusal to serve in the military. Following appeals that lasted over three years, his boxing license was reinstated in late 1970. Frazier had knocked out Buster Mathis in 1968 to claim the title Ali had vacated, then beat Ellis in February 1970 for the WBC belt. On December 30, 1970, Ali and Frazier signed to fight and the name calling began. Ali tried to hype the match by calling Frazier an “Uncle Tom.” He said most white Americans would be rooting for Frazier, who was a decent, hard-working, law-abiding man, too busy trying to support his growing family to get involved in any causes. Despite his best efforts to demean and belittle Frazier, Ali was never able to ruffle Smokin’ Joe’s feathers. The 27-year-old Frazier came into the fight in his prime, while the 29-year-old Ali had completed two quick tune-up fights after more than three years of inactivity. The stage was set for an epic confrontation—the most anticipated heavyweight title fight since the Joe Louis-Max Schmeling rematch in 1938.

The Fight of the Century was one of the most electric nights in the history of America’s most famous arena as 20,455 spectators packed New York’s Madison Square Garden. Ringside seats sold for $ 150 [an unheard of sum in 1971], and the fight became the ultimate celebrity event. Taking photos for Life magazine, Frank Sinatra sat ringside, where he was joined by Barbara Streisand, Diana Ross, Dustin Hoffman, Hugh Hefner, and Sammy Davis Jr. Bing Crosby could not get a ticket so he watched on closed-circuit television from sold-out Radio City Music Hall. Both fighters earned $ 2.5 million, the largest single payday for any entertainer or athlete at that time. Fifty countries had purchased rights to the telecast, which was broadcast ringside in a dozen different languages and watched by 300 million people around the world. More people tuned into the fight—which grossed nearly $ 20 million—than had watched the moon landing two years earlier. Ali predicted Frazier—who was made a six-to-five favorite despite giving up four inches in height and eight inches in reach—would “fall in six.” Ali weighed in at 215, Frazier was 205.

Amidst a circus-like atmosphere at Madison Square Garden, Ali started quickly. Frazier pressed a withering body attack in the middle rounds, throwing more punches in one round than most heavyweights throw in an entire fight. It was a genuine grudge match living up to its billing. While artist LeRoy Neiman painted the two warriors as they fought, actor Burt Lancaster provided color commentary for the closed-circuit broadcast. The match was being fought with a brutal intensity rarely seen in any prizefight. Unable to keep up the torrid pace, Ali fought flatfooted. With a minute to go in the 11th round, Frazier caught Ali with a thunderous left hook to the jaw, buckling the challenger’s knees. Ali fought back valiantly in the 14th, but another vicious left hook to his jaw knocked him flat on his back in the 15th and final round. It was only the third time that Ali had been knocked down in his career, and he bounced up at the count of three and made it to the final bell. Minutes later, referee Arthur Mercante made it official: Frazier had retained the title with a unanimous decision, handing Ali his first professional loss.

The Fight of the Century defined the essence of a brutal sport. Only David and Goliath were better than Ali and Frazier in terms of human combat. The two great champions met three times, and each was The Ring magazine’s “Fight of the Year.” Their rivalry was one of boxing’s most exciting trilogies and brought out the best in each other and in the sport of boxing.