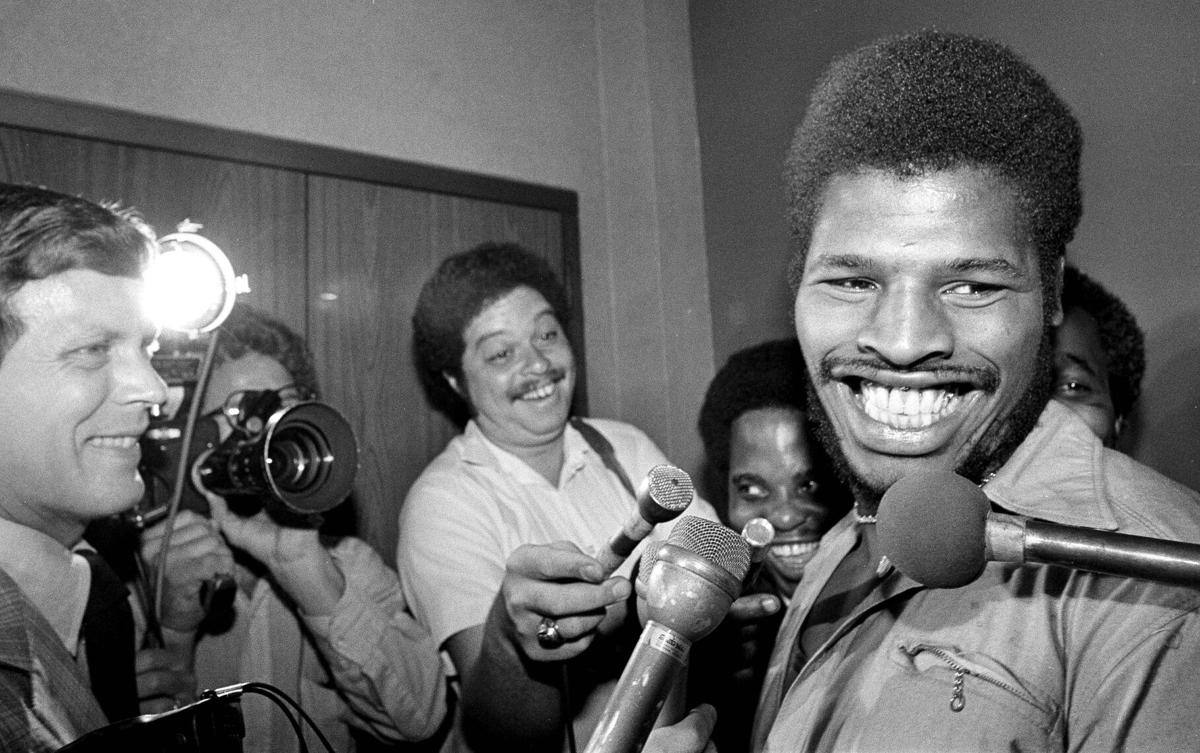 Leon Spinks is the only man to take a title from Muhammad Ali in the ring.

On February 15, 1978 – in only his eighth pro fight – Spinks won the undisputed heavyweight championship after defeating Ali in a split decision.  It was one of the most shocking moments in boxing history.  The sport hadn’t seen as big an upset since 14 years earlier, when Ali [then Cassius Clay] forced Sonny Liston to quit on his stool after six rounds in Miami.

So began what is perhaps the most tragic rise and fall in the history of the Sweet Science.

Born on this date in 1953, Leon Spinks was raised in an impoverished neighborhood of St. Louis.  He and his brother, Michael, learned to box to survive.  In 1973, Spinks joined the Marines, where he served on active duty until 1976.  As an amateur light heavyweight, he went 178-7 with three National AAU titles.  Spinks won a bronze medal at the inaugural 1974 World Championships, then captured silver at the 1975 Pan Am Games.  In 1976, he earned a spot on the U.S. Olympic boxing team.

Competing alongside Michael, who won middleweight gold, Leon beat the heavily-favored Sixto Soria of Cuba to capture the light heavyweight gold medal in Montreal.  The Spinks brothers became the first siblings to win gold medals in the same sport at the same Olympic Games.

In January 1977, Spinks made his professional debut at the Aladdin Hotel in Las Vegas, where he stopped Bob Smith by TKO in the fifth round.  Thirteen months later, he faced Ali – The Greatest – for the undisputed heavyweight championship of the world.  In what was supposed to be a tune-up bout for Ali in preparation for top-ranked challenger Ken Norton, the former Marine captured the title belt faster than any fighter in history.  Entering as a 10-1 underdog, Spinks was offered $ 320,000 to face the champion, who had celebrated his 36th birthday just one month earlier.

Entering to the Marines’ Hymn before 5,300 patrons at the Las Vegas Hilton and millions more on television, the 24-year-old Spinks showed no fear.  Despite giving away a two-inch height advantage and 27 pounds [Ali came in at 224, the biggest weight advantage he ever held over an opponent in 61 pro fights], Spinks out-boxed and outlasted the aging champion for 15 rounds.  The bout was named 1978 Fight of the Year by The Ring, and the 15th round was named Round of the Year by the magazine.  Following the announcement of a split decision, Spinks beamed a gap-toothed grin as he told the world, “He is the greatest but I’m the latest.”

One month later, the WBC stripped Spinks of his title and awarded it to Norton, whom Spinks had refused to fight in order to give Ali a rematch.  Seven months after their first fight in Las Vegas, Ali and Spinks met before more than 60,000 at the Louisiana Superdome.  Installed as a 2 1/2- 1 favorite, Ali frustrated Spinks – flicking jabs, tying him up and then circling away.  Unable to land many punches, Spinks lost in a Unanimous decision.

Following the loss to Ali, Spinks’ career went into an irreversible tail spin.  He burned through the $3.5 million he’d earned for the fight, jetting around the country and partying at New York City’s trendy Studio 54 nightclub.  Spinks hired Laurence Tureaud [who later became Mr. T] to be his bodyguard for $ 3,000 per day.  In his first fight since losing to Ali, Spinks was knocked out two minutes into the first round.  He earned a title shot in 1981, but lost to Larry Holmes by TKO in the third round.  Spinks challenged Dwight Muhammad Qawi for the WBA Cruiserweight title in 1986, but lost by TKO in the sixth round.

Spinks worked as a professional wrestler in the 1990s.  In 1992, he held the FMW Brass Knuckles heavyweight championship for two months before losing the title to Atushi Onita in a cage match in Tokyo.  Needing money, Spinks continued to box.

He was knocked out 69 seconds into the first round by John Carlos, a stand-in who was making his pro debut.  Spinks lost five of his last nine matches before hanging up the gloves for good in 1995.  In a career than spanned 18 years, the one-time undisputed heavyweight champion of the world amassed an underwhelming record of 26-17-3.

Life after boxing has been a struggle.  Spinks, who lost his front teeth while boxing in the service, lived in a homeless shelter in St. Louis and later worked as a greeter at Mike Ditka’s restaurant in Chicago.  He ended up in Nebraska, working as a custodian at a YMCA and at McDonalds, where he earned minimum wage and 50 percent off all the Big Macs he could eat.  In 2011, Mr. Spinks moved to Las Vegas with his third wife, Brenda, where he earns money signing memorabilia.

Michael Spinks’ life went in a very different direction.  The younger Spinks fought 32 professional bouts, winning 31 of them.  His final fight in 1988 was his only loss as a professional, when Mike Tyson knocked him out.  Michael Spinks retired following that bout and has an estimated net worth of $ 100,000.  After Michael beat Larry Holmes in 1985, they became the first brothers to have held world heavyweight championship titles.

Leon Spinks was diagnosed with brain trauma in 2012 due to his fight career.  Two years later, he underwent back-to-back abdominal surgeries for a blocked intestine.  Leon’s son, Cory, held the undisputed welterweight title and was IBF junior middleweight champion from 2006 to 2008.  Leon’s grandson, Leon Spinks III, is an aspiring light heavyweight.

In November 2017, Leon and Michael Spinks were inducted into the Nevada Boxing Hall of Fame.