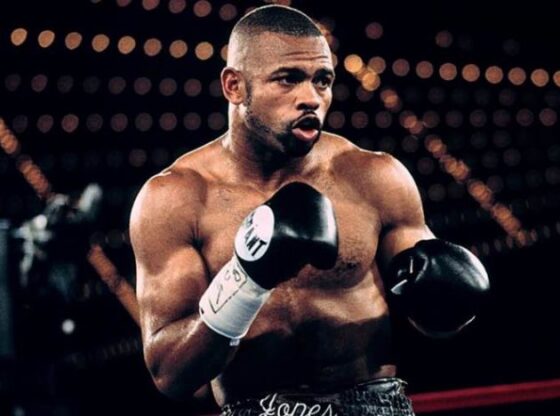 Roy Jones Jr. is the only boxer in history to start his professional career as a light middleweight and go on to become heavyweight champion of the world.

Considered one of the best boxers of all time, Jones is a former six-time world champion in four weight classes.  He held titles as a middleweight, super middleweight, light heavyweight and heavyweight.

During his prime, Jones possessed exceptional hand speed, athleticism, movement and reflexes.  “He hits like a heavyweight,” observed former world heavyweight champion George Foreman, “and moves like a lightweight.”

Jones once held a record seven belts simultaneously and is a three-time winner of the “Best Boxer” ESPY Award [1996, 2000, 2003].  The Boxing Writers Association of America named Jones “Fighter of the Decade” for the 1990s.

Despite suffering one of the worst injustices in Olympic boxing history, when he was robbed of a gold medal at the 1988 Seoul Games, Jones went on to fashion one of the most prolific careers the Sweet Science has ever seen.

Over the course of nearly three decades, Jones was 65-9, with 47 knockouts.  Mike McCallum is a hall-of-famer and former world champion in three separate weight classes.

Known for his iron chin and toughness, he was never stopped in 55 professional fights.  After losing to Jones in a unanimous 12-round decision in November 1996, McCallum called his opponent “the greatest fighter of all time.”

Montell Griffin faced Jones twice and is a former sparring partner of Floyd Mayweather.  “Floyd was no comparison as far as speed,” said Griffin.  “Roy was much faster.”

In March 2003, Jones moved up in class to fight John Ruiz, who had defeated Evander Holyfield for the WBA heavyweight title.

Weighing in at 193 pounds, Jones won a unanimous 12-round decision over the 226-pound Ruiz, becoming the first former middleweight champion to win a heavyweight title since Bob Fitzsimmons in 1896.

Eight months later, Jones opted to return to the light heavyweight division and face Antonio Tarver for the WBC title.  After picking up a majority decision, Jones was named 2003 Fighter of the Year by the World Boxing Hall of Fame.

Born in Pensacola, Florida, January 16, 1969, Roy Levesta Jones Jr. grew up with an abusive father.  Roy Jones Sr. was a decorated Vietnam veteran and former club fighter who operated a pig farm on the outskirts of Pensacola, in the Florida panhandle.

He drove the eldest of his five children [Junior has four younger sisters] mercilessly, taunting him and “sparring” with the child in a crude boxing gym Jones Sr. built in the yard.

The elder Jones hit his son with a plastic pipe if the boy made a mistake in the ring.  “I was in pain all day, every day,” recalled Junior years later.  “I was so scared of my father.”

Jones got very good very fast.  At 15, he won the national Junior Olympics at 119 pounds.  In 1986, he won the U.S. national Golden Gloves championship at 139, then claimed the 156-pound title the following year.  Having won over 100 amateur bouts, Jones qualified for the 1988 U.S. Olympic boxing team as a light middleweight.

Tensions in Seoul ran high in September of 1988.  At the Los Angeles Games four years earlier, Korean boxing officials had threatened to withdraw their entire team from the competition over perceived scoring decisions that favored U.S. fighters.

In an early-round bantamweight match at the 1988 Seoul Games, a referee was attacked and a near-riot broke out inside the Chamshil Student’s Gymnasium after Korea’s Byun Jong-il was out-pointed by a Bulgarian fighter.

Referee Kevin Walker had to be escorted back to New Zealand and Byun staged his own protest by sitting silently in the ring for over an hour.

Jones dominated his opponents in the Olympic tournament, not losing a round en route to the final.  The gold medal match was an utterly one-sided affair.

In what may be the most corrupt decision in the annals of Olympic boxing, Jones lost a 3-2 decision.  Park apologized to Jones after the fight, and the referee told Jones that he was dumbstruck by the judges’ decision.

Park was so ashamed he could barely raise his eyes on the medal stand, while Jones received thunderous applause.

The Korean held Jones’ fist aloft, as the distraught American was awarded the silver medal.  “They put the silver medal around my neck and I took it right off,” said Jones.

“I won’t put it around my neck ever again.”  Judges from the Soviet Union and Hungary voted Jones the overwhelming winner.  Those from Uganda, Uruguay and Morocco had the Korean in front.

“The American won easily; so easily in fact that I was positive my four fellow judges would score the fight for the American by a wide margin,” Moroccan judge Hiouad Larbi later said.  “So I voted for the Korean to make the score only 4-1 for the American and not embarrass the host country.”

Amid allegations of bribery, an official IOC investigation concluded that three of the judges had been “wined and dined” by South Korean officials, yet the committee stood by its decision.

Park kept the gold, while Jones was awarded the Val Baker Trophy as the best stylistic boxer of the 1988 Games, only the third time in Olympic history that the award did not go to a gold medal winner.

All three judges who voted against Jones were eventually suspended, and their rigged decision shook the sport to its core.  The incident led Olympic organizers to establish a new scoring system for Olympic boxing.

Roy Jones Jr. made his professional debut in May 1989, stopping Ricky Randall with a second-round TKO at the Civic Center in Pensacola.  He won his first 21 fights before earning a unanimous decision over Bernard Hopkins to claim the IBF middleweight title in May 1993.  In November 1994, Jones faced IBF super middleweight champion James Tomey – who was undefeated in 46 bouts – for the title.  Jones won a unanimous decision to claim the super middleweight belt, then took the light heavyweight title two years later.  Jones lost for the first time as a pro in March 1997, when he was disqualified for hitting Montell Griffin after a knockdown.  In a rematch five months later, Jones regained the light heavyweight title after knocking Griffin out in the first round.

Leveraging his 74-inch reach, “Captain Hook” became the undisputed light heavyweight champion in 1999, unifying the WBA, WBC and IBF titles.  After taking the heavyweight belt from Ruiz in March 2003, Jones ran his record to 49-1 with a majority decision over Antonio Tarver six months later.  Following the Tarver fight, Junior lost his focus.  He was beaten in his next three bouts, and lost seven of his next 12 before claiming the vacant UBO intercontinental cruiserweight title in 2011.  Jones’ last match came in February 2017, when he stopped Bobby Gunn by TKO in the eighth round to take the WBF cruiserweight championship.

On this date in 1996, Roy Jones Jr. brought his professional record to 34-0 with a unanimous 12-round decision over former world middleweight and light heavyweight champion Mike McCallum to win the vacant WBC light heavyweight title at the Ice Palace in Tampa.