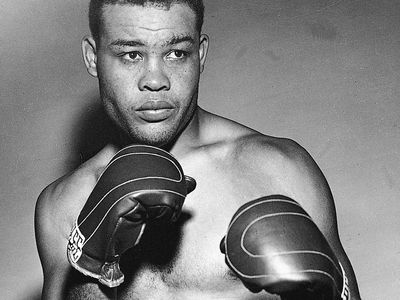 “Everyone has a plan until they’ve been hit.” – Joe Louis

Joe Louis is the best heavyweight boxer of all time.  He was world champion from 1937 to 1949, a reign that lasted 140 consecutive months.  The longest in heavyweight history.  Louis successfully defended his title 25 times—more than any heavyweight ever—knocking out 21 of them, including five former world champions–along the way.  One of the most beloved fighters in history, the “Brown Bomber” was 66-3-0 [52 by knockout] in 16 years as a pro.  He reigned over the heavyweight division for a record 11 years, eight months and beat some of the greatest fighters in history, including Billy Conn, Jersey Joe Walcott, and Max Baer—father of The Beverly Hillbillies’ Jethro Bodine.

Born in a shack outside Lafayette, Alabama, May 13, 1934, Joseph Lewis Barrow was the grandson of slaves.  He was the seventh of eight children born to Munroe and Lillie Barrow, who were sharecroppers.  Joe knew very little of his father, who was committed to a mental institution in 1916.  His mother remarried Patrick Brooks and, in 1924, the family moved to Detroit.  Joe attended Bronson Trade School, where he trained as a cabinetmaker.  When he began hanging out with a gang in Detroit’s Black Bottom neighborhood, Lillie signed her son up for violin lessons.  Joe took the violin money and began using it to train at Brewster Recreation Center, fighting under the name “Joe Louis” so his mother wouldn’t find out.

Louis made his amateur debut at 17, losing to future Olympian Johnny Miller.  Possessing great punching power, he rose quickly, winning the Brewster club championship before going on to win the light heavyweight title at the Golden Gloves in Chicago.  The following year, he won the 1934 AAU national championships. With an amateur record of 50-4, [43 by knockout], Louis decided to turn pro.

By the end of 1935, Louis was 23-0 and had dispatched former heavyweight champions Primo Carnera and Max Baer while accumulating $ 370,000 in prize money.  His first defeat came in June 1936, when former heavyweight champion Max Schmeling knocked Louis out in the 12th round.  Louis had taken his German opponent lightly and Americans—particularly African Americans, for whom the Brown Bomber was a hero, as the highest profile black athlete of all time—were despondent over the loss.  It would be the last time Louis would lose while in his prime.  Twelve months later, Louis KO’d “Cinderella Man” James J. Braddock—later portrayed by Russell Crowe in a movie of the same name—to claim the heavyweight crown.

Two years after Jesse Owens had debunked Hitler’s myth of Aryan supremacy by winning four gold medals at the 1936 Berlin Olympics, the world was on the brink of war.  Nazi Germany had taken over Austria, escalating tensions around the globe.  Schmeling became the sporting symbol of the tyrannical Nazi regime, while Louis represented hope for millions of Americans weary from the Great Depression.  Against this backdrop of freedom versus fascism came Louis-Schmeling II.  More was at stake than boxing supremacy; the winner could boast to the world his racial supremacy and might.

On June 22, 1938–one year to the day after he had taken the heavyweight title from Braddock–Joe Louis faced Max Schmeling in what boxing historian Burt Sugar called “the greatest sporting event of the 20th century.”  In what was perhaps boxing’s finest hour, Schmeling went down like the Titanic.  As a Yankee Stadium crowd of 70,000-plus roared, Louis stalked the challenger from the opening bell, pummeling him with combinations and dropping Schmeling to his knees less than 30 seconds into the fight.  Louis would drive the German to the canvas twice more before Schmeling’s corner waved the white towel at just 2:04 into the first round.  Louis had annihilated Schmeling—throwing 41 punches while the German threw two–and, in 124 seconds, become a national hero.

After the match, Bill Gaither, a blues singer/songwriter who had driven from Chicago to see the fight, wrote “Champ Joe Louis [King of the Gloves]”.  It became an instant hit.

It was only two minutes and four seconds

‘Fore Schmeling was down on his knees

He looked like he was praying to the good Lord

To ‘have mercy on me, please’

From January 1939 through May 1941, Louis defended his title 13 times, more than any fighter since the bare-knuckle era.  The frequency of his matches and wins caused the press to dub these bouts the “Bum of the Month Club.”  The characterization was inaccurate, as most of the challengers Louis faced in this period were top-ten heavyweights.

Louis enlisted in the U.S. Army in January 1942, where he assisted with recruiting.  Although he never saw combat, Louis traveled over 21,000 miles and staged nearly 100 boxing exhibitions for American soldiers, donating his prize money to military relief efforts.  Louis used his influence to help Jackie Robinson [Daily Dose, 4/15/16], whom he had befriended in the Army, gain entrance into Officer Candidate School after Robinson was unfairly denied admission because of his race.  Louis rose to the rank of technical sergeant and was awarded the Legion of Merit for “incalculable contribution to the general morale” before being discharged in October 1945.

After nearly four years in the military, Louis returned to boxing.  With diminished skills and mounting debt [due to a lop-sided contract with his managers and underpayment of his taxes], he fought four times before retiring in 1948 with a career record of 58-1.  Twenty-seven months later, broke and owing over $ 500,000 in back-taxes, the aging Louis had no choice but to return to the ring.  In September 1950—and with all his proceeds going to the IRS–Louis faced Ezzard Charles, who had claimed the vacant heavyweight title the prior year.  Heavy and slow, the 36-year-old Louis was unable to regain his former magic, losing a 15-round unanimous decision.  After beating several club-level opponents, Louis was guaranteed $ 300,000 to face undefeated contender Rocky Marciano in October 1951.  Few gave Louis a chance.  “He wasn’t just going to lose,” said Ferdie Pachecho, long-time cornerman for Muhammed Ali. “He was going to take a vicious, savage beating.  Before the eyes of the nation, Joe Louis–an American hero–was going to get beaten up.”  Louis was dropped in the eighth round by a Marciano left and knocked through the ropes and out of the ring 30 seconds later.  It was the last fight of the Brown Bomber’s magnificent career.

Joe Louis died—penniless–of cardiac arrest in 1981.  He was buried at Arlington National Cemetery with full military honors, and his funeral was paid for in part by Max Schmeling, who also served as a pallbearer.