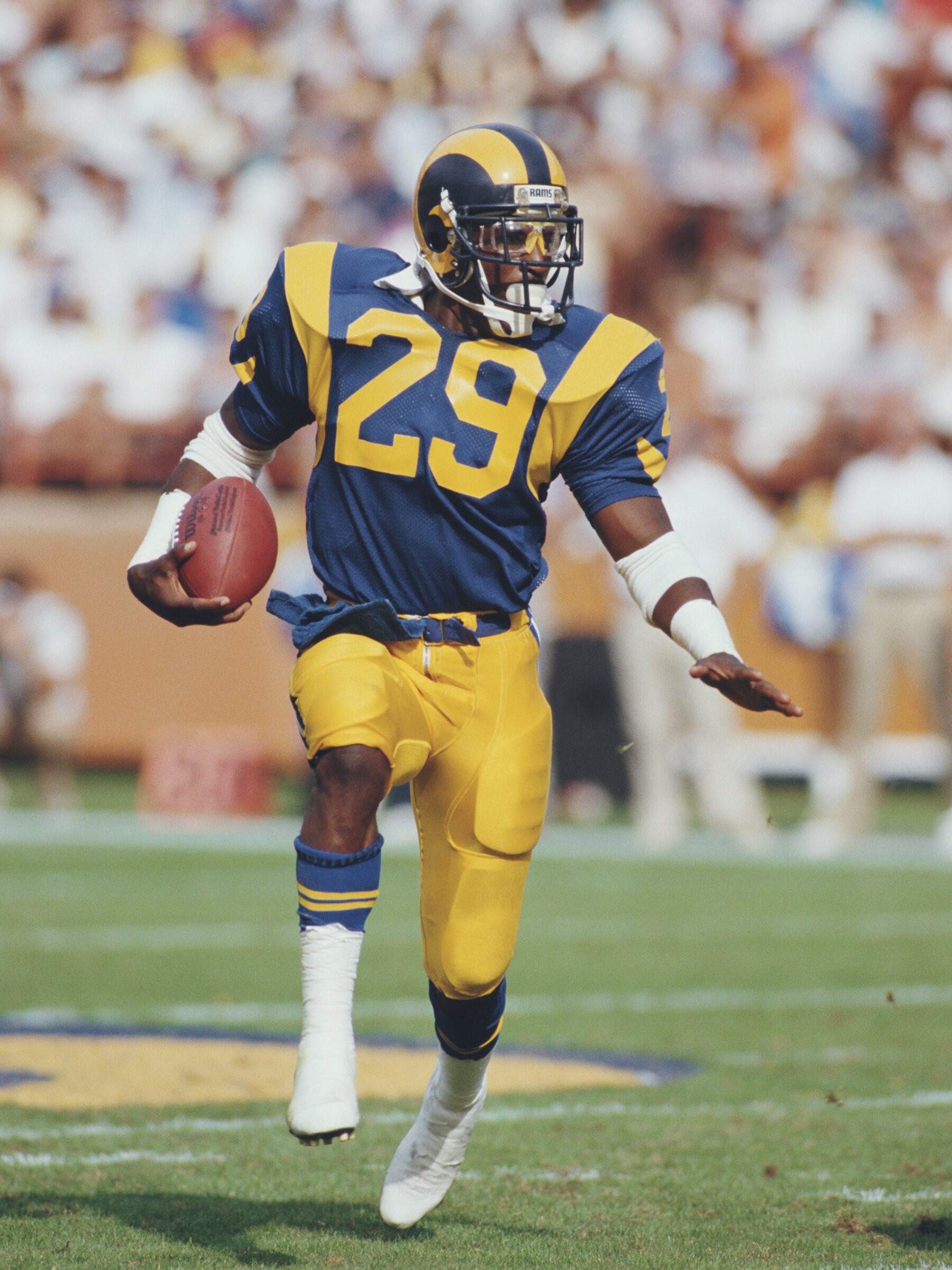 The most productive running back of his era turns 56 today.

Eric Demetric Dickerson was born in Sealy, Texas—a small town about 50 miles west of Houston—on this date in 1960.  His mother, Helen, was 17 at the time of Eric’s birth and decided not to marry the birthfather, Richard Seal, choosing instead to place her son in the care of his great-aunt and uncle, Viola and Kary Dickerson.  Young Eric ran track at Sealy High School, running 9.4 in the 100-yard dash to win the state title.  He also played football, rushing for over 2,600 yards and scoring 37 touchdowns as a senior.  In the Texas AA state championship game, Dickerson ran for 311 yards to lead Sealy to the title.  After being named to the 1978 Parade All-America Team, Dickerson was the most sought-after running back in the nation.  He considered offers from Texas and USC but wanted to go to Oklahoma.  However, Viola encouraged him to stay closer to home, so Dickerson announced he would be attending Texas A & M, only to change his mind and choose SMU.

Eric Dickerson arrived in Dallas with much fanfare.  Following a sluggish freshman season in which classmate Craig James was voted Southwest Conference 1979 “Newcomer of the Year”, Dickerson rushed for over 100 yards a game five times as a sophomore.  In his junior season, he scored 19 touchdowns and gained over 1,400 yards en route to being named All-American and Southwest Conference Player of the Year.  Dickerson and James combined to form a dynamic backfield duo that was dubbed the “Pony Express.”  As a senior, Dickerson had six touchdown runs of more than 60 yards—including two 80 yard gallops—to finish the season with 1,617 yards.  He averaged 7.0 yards per carry, scored 17 touchdowns and was again named All-American and SWC Player of the Year.  In four years at SMU, Dickerson played 44 games and scored 48 touchdowns, tying Doak Walker’s school record.  His 790 carries and 4,450 career yards broke Earl Campbell’s [Daily Dose, 5/2/16] conference record.  Led by the Pony Express, SMU beat Dan Marino [Daily Dose, 9/7/15] and Pitt in the 1983 Cotton Bowl to finish the year ranked second in the nation, behind Penn State.  Dickerson finished third in Heisman Trophy voting, behind Hershel Walker and John Elway [Daily Dose, 6/26/15], six spots ahead of Marino.

The 1983 NFL Draft is considered the richest in league history, as seven players—six of whom were taken in the first round—were later enshrined into the Pro Football Hall of Fame.  The Los Angeles Rams selected Eric Dickerson with the second overall pick [behind Elway, who the Baltimore Colts took, but did not sign].  He was also drafted by the USFL’s Arizona Wranglers but, following the advice of his great-aunt, “picked the league that had been around longer.”  Dickerson made a wise choice, setting single season rookie records for carries [390], rushing yards [1,808] and touchdowns [18].  Not only was he named 1983 Rookie of the Year, but in his first year in the league, Mr. Dickerson earned Most Valuable Player and Player of the Year honors.  His second season was even better, as Dickerson ran for over 100 yards a record 12 times and finished the year with 2,104 rushing yards to break O.J. Simpson’s single-season record of 2,003, set in 1973.  He was named 1984 NFC MVP and continued to be a workhorse for the Rams, gaining over 1,000 yards in each of his first four seasons.  In three of those years, he rushed for over 1,800 yards.

“Eric the Great” was the leading ground gainer in football and wanted to earn “quarterback money.”  In his fifth year, he was earning $ 682,000 per season.  The Rams offered him $ 975,000, but Dickerson balked.  In one of the biggest trades in history, Dickerson was sent on Halloween night 1987 to the Indianapolis Colts in a three-team deal.  The Rams got two players and six draft picks, while the Colts got Dickerson; paying him $ 5.6 million over four years.  Dickerson played 13 games for the Colts in 1987, gaining over 1,000 yards while leading Indianapolis to their first playoff appearance since 1977.  The following year, he ran for 1,659 yards to become the first Colt to lead the league in rushing since Alan Ameche in 1955.  Dickerson only played in 21 games over the following two seasons and was traded to the Los Angeles Raiders for two low draft picks in 1992.  Mr. Dickerson was dealt to Atlanta in 1993, where he rushed for 91 yards and played in four games before retiring.

In 11 NFL seasons, Eric Dickerson gained 13,259 yards and scored 90 touchdowns.  He was the first player ever to gain over 1,000 yards in each of his first seven seasons and reached 10,000 career yards in 91 games played, faster than any back in history.  In fact, Mr. Dickerson reached every threshold between 2,000 and 11,000 yards faster than any player ever had.  At 6’3”, 220 pounds, Dickerson was a rare combination of speed and power.  Fast and fluid, he ran like a thoroughbred.  Former Rams coach John Robinson called Dickerson, “the smoothest runner I’ve ever seen.”  Dickerson played in six Pro Bowls, was a three-time NFC Offensive Player of the Year and led the NFL in rushing four times.  He was named to the NFL 1980s All-Decade Team, had his number 29 retired by the Rams and is a member of the Colts Ring of Honor.  Eric the Great was rated as the third-best running back in Texas high school football history—between Campbell and Thurman Thomas.  Like those two Texas prep legends, Eric Dickerson is a member of the College Football and Pro Football Halls of Fame.  At the time of his retirement in 1993, Eric Dickerson was second to Walter Payton [Daily Dose, 10/7/15] on the NFL’s all-time rushing list.