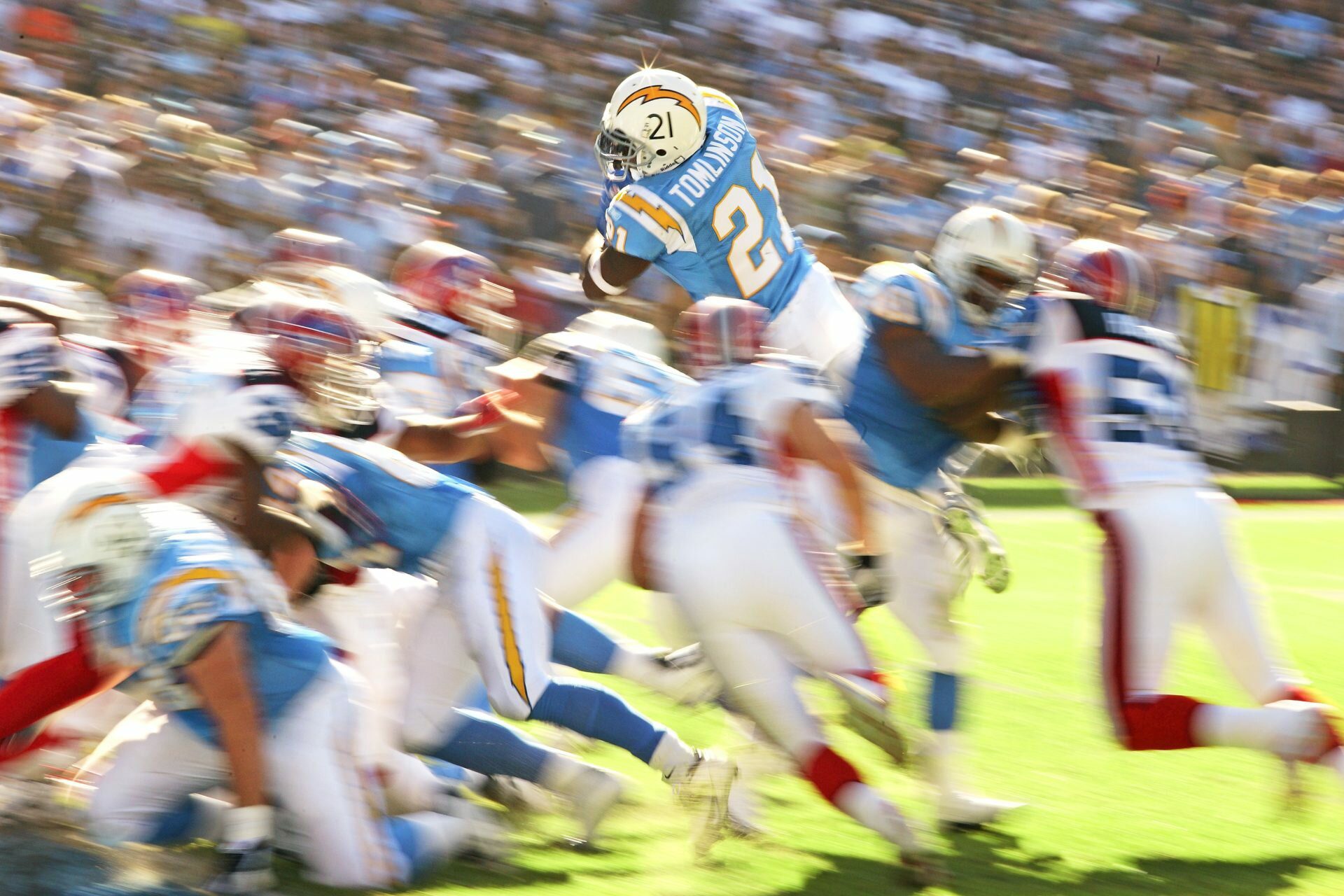 LT simply knew how to find the end zone.  He led the league in rushing touchdowns three times and set an NFL record with rushing touchdowns in 18 straight games from 2004 to 2005.  In 2006, Tomlinson had one of the best seasons in history, setting NFL records for most overall touchdowns [31], rushing TDs [28] and points [186] in a single season. A tireless worker, the 5’10”, 215-pound Tomlinson played 11 NFL seasons.  It wasn’t until his tenth where he failed to score at least ten touchdowns, and he averaged 17 scores through the first nine years.  The talented Tomlinson could run, block and catch passes.  He could also throw the football.  LT completed eight passes in 12 career attempts.  Seven went for touchdowns, second all-time behind Walter Payton for most touchdown tosses by a non-quarterback.

Tomlinson played nine years with the Chargers and two with the Jets.  He was a two-time rushing leader, a three-time First Team All-Pro, and a five-time Pro Bowler.  The 2006 NFL MVP is a member of the 2000s All-Decade Team and was a first ballot Hall of Famer in 2017.  One of only seven players in NFL history to have run, caught and passed for a touchdown in the same game, Tomlinson is the first Pro Football Hall of Famer whose professional career began in the 21st century. An every-down ballcarrier, LT was one of the most complete backs ever to play the game.  He burst onto the scene gaining 1,236 rushing and 367 receiving yards as a rookie and only got better with each new season.  Tomlinson was elite.  A dual-threat back, he could hit any hole in the line or dive over the top to avoid a loss.  Possessing the ability to run any route, he was unstoppable as a receiver, as linebackers simply couldn’t cover him one-on-one. Sturdy and reliable, Tomlinson missed just one game from 2001 to 2008 and only six over his entire career.  In 2006, he led the league in rushing yards, touchdowns and yards per game.  The following season, Tomlinson earned his second straight rushing title.  A hard-nosed player with a gritty determination, LT featured dazzling moves and terrific open-field speed.

LaDainian Tomlinson averaged 1,945 total yards through each of his first eight seasons and finished as the NFL’s fifth all-time leading rusher.

The tough Texan caught 100 passes in 2003 and twice totaled over 2,300 yards in a season.  He reeled off eight straight 1,000-yard seasons to begin his career and finished with 13,684.  Tomlinson rushed for 145 touchdowns and averaged 4.3 yards per carry during his brilliant career.  He also caught 624 passes for 4,772 yards and 17 scores.  At the time of his retirement, LaDainian Tomlinson was fifth on the all-time rushing list, second in rushing touchdowns and third in total TDs. Born in Rosebud, Texas, June 23, 1979, LaDainian Tarshane Tomlinson was raised by a single mother who served as pastor of a church in nearby Waco.  A four-sport standout at University High School, Tomlinson didn’t become the starting tailback until his senior year.  After amassing 2,554 yards and 39 touchdowns, he was named to the 1997 All-State Team, where he was joined by future San Diego Charger teammates Drew Brees and Quinton Jammer.  Considered undersized, Tomlinson was overlooked by most big-time college football programs. TCU took a chance on Tomlinson, and LT took a chance on the Horned Frogs.  TCU had appeared in only two bowl games in the previous 34 seasons and had recently been downgraded to the Western Athletic Conference [WAC] after the dissolution of the Southwest Conference in 1996.  After splitting time with Basil Mitchell for his first two years in Fort Worth, Tomlinson had a breakout season as a junior.  He set an FBS single game rushing record with 406 yards against UTEP and went on to lead the NCAA in rushing touchdowns, attempts and yards. LT returned to TCU for his senior season, where he led the nation with 2,158 rushing yards and 22 touchdowns.  After finishing as the leading rusher in WAC history and 12th on the NCAA all-time list, Tomlinson garnered the Doak Walker Award as the most outstanding running back in college football.  What’s comical?  LaDainian Tomlinson finished fourth in Heisman Trophy voting in 2000, behind three quarterbacks.  The winner was the forgettable Chris Weinke and the runner-up was Josh Heupel of Oklahoma.  Both finished ahead of Brees, who went on to become the most prolific passer in NFL history.

Only two players – Jerry Rice and Emmitt Smith – have scored more touchdowns than LaDainian Tomlinson and he remains the only player in pro football history to find the end zone more than 30 times in a single season.

The San Diego Chargers took Tomlinson, a two-time WAC Offensive Player of the Year, with the fifth overall pick of the 2001 draft.  With their first pick of the second round, the Chargers selected Brees.  In 2004, Tomlinson and Breesrepresented the Chargers in the Pro Bowl.  Two years later, the franchise gave up on Brees and, in 2009, released Tomlinson, the best running back in football.  Then, in the most foolhardy move of all, the Chargers – whose only championship came in 1963 — bolted San Diego following the 2016 season. LaDainian Tomlinson had his number 5 jersey retired by TCU in November 2005.  In 2014, he was inducted into the College Football Hall of Fame.  The greatest back in Chargers history holds 20 franchise records.  A member of the Chargers Hall of Fame, the team retired his No. 21, where he joined Lance Alworth, Junior Seau, and Dan Fouts. On this date in 2006, San Diego Chargers running back LaDainian Tomlinson rushed 25 times for 199 yards in a 20-9 win over the Kansas City Chiefs.  LT had touchdown runs of 15 and 85 yards and caught one pass for five yards as the Bolts ran their record to 12-2.  San Diego finished 14-2 to win the AFC West before going on to lose to New England 24-21 in the divisional round of the playoffs.