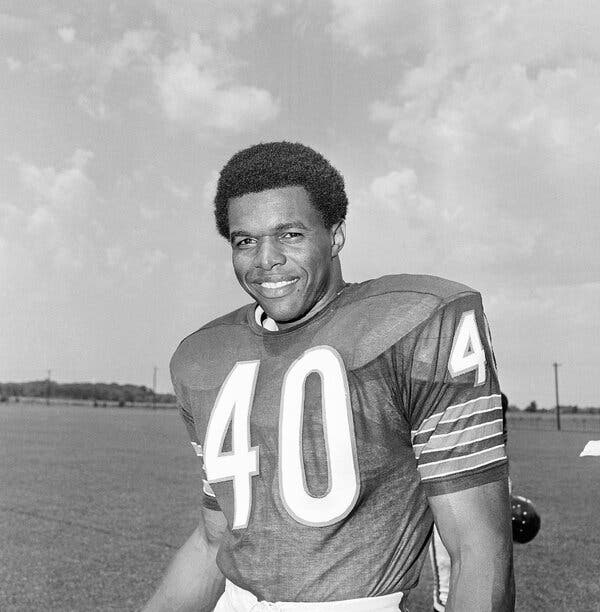 Gale Sayers may be the most electrifying runner in pro football history.

Sayers played just 68 games over seven NFL seasons.  He scored 336 points—56 touchdowns—as a running back, receiver and kick returner.  He scored 22 touchdowns as a rookie, including six in one game, both of which remain records.  No player in history ran like Gale Sayers, although Barry Sanders was close.  He changed direction at full speed, first juking and then out-running defenders.  Long before Ricky Bobby and Cal Naughton, Jr., Sayers was the original Shake “N Bake: now you see him, now you don’t.  Sayers set seven NFL records, 23 team marks, and gained 9,435 combined yards during his all-too-brief career.  He led the NFL in rushing twice and was named to the Pro Bowl in each of his first four seasons.  For his career, he averaged over five yards per carry.  “There was a magic about him that still sets him apart from the other great running backs in pro football,” wrote Red Smith.  “He could slice through the middle like a warm knife through butter, and when he took a pitchout and peeled around the corner, he was the most exciting thing in pro football.”

Gale Eugene Sayers was the second of three sons born to an auto mechanic father and mother who was a homemaker.  Bernice Sayers hoped her middle child would be a girl that she intended to name Gail.  When she delivered a boy, she kept the name but changed the spelling.  Sayers was born in Wichita, Kansas—birthplace of Barry Sanders–on May 30, 1943.  The family moved to a farm in a small Kansas town aptly named Speed before settling in Omaha, Nebraska.  Sayers attended Omaha Central High School, where he was a standout running back and middle linebacker.  He also ran track, setting the state long jump record with a leap of nearly 25 feet.  A high school All-American, Sayers had over 75 scholarship offers for football, choosing the University of Kansas because he liked head coach Jake Mitchell and wanted to remain close to home.  Sayers ran track at Kansas, specializing in the high hurdles and 100 yard dash, while setting the school long jump record.  As a sophomore, he averaged over seven yards per carry for the Jayhawk football team.  A dazzling halfback and kick returner, Sayers set an NCAA record as a junior with a 99-yard run from scrimmage against Nebraska.  The following year, he returned a kickoff 96 yards for a touchdown to spark an upset win over Oklahoma.  After receiving All-America honors in 1963 and 1964, the “Kansas Comet” left KU to play professional football.

The entire landscape of American sports changed in the late autumn of 1964.  Major League Baseball was king, but an infusion of capital from a television contract with NBC finally gave the upstart American Football League the means to compete with the rival NFL.  On November 24, both leagues held their annual draft in New York City, and the New York Jets selected Alabama’s Joe Namath [Daily Dose, 5/31/16] with the first overall pick.  Namath would provide the AFL with instant credibility and, less than two years later, the two leagues would merge, giving rise to today’s NFL—the most popular and powerful league in sports history.  The Chicago Bears acquired the third pick of the 1965 NFL Draft from the Pittsburgh Steelers.  After Tucker Frederickson and Ken Willard went first and second, Bears coach and owner George Halas selected Dick Butkus.  One spot later, the Bears chose Gale Sayers.  It is the only time in pro football history that two eventual hall of famers have been drafted back-to-back.  Sayers was also chosen by the Kansas City Chiefs with the fifth pick of the AFL Draft, four spots behind Namath [Butkus went ninth to Denver].  Both Butkus and Sayers turned down more lucrative offers from the AFL to play for “Papa Bear” in the more established league.

After facing the defending NFL champion Cleveland Browns in the College All-Star Football Classic [Daily Dose, 7/27/16], Sayers reported to training camp as a Bears rookie.  He burst on the scene in a preseason game against the Los Angeles Rams, scoring on a 93-yard kickoff return, 25-yard pass play, and 77-yard punt return.  In the fifth regular season game of the 1965 season, he scored four touchdowns against the Minnesota Vikings, including a 96-yard game breaker to seal a 45-37 victory.  In Week 13—on a muddy field in Chicago– he scored six touchdowns and amassed 336 total yards in a 61-20 win over San Francisco.  “The mud affected the kid,” said teammate Mike Ditka after the game.  “If it had been dry out there, he would’ve scored ten touchdowns.”  In his rookie year, Sayers scored an NFL record 22 touchdowns [14 rushing, 6 receiving and one each on punt and kickoff returns].  He gained 1,374 yards from scrimmage and had 2,272 all-purpose yards [also a record].  “Black Magic” averaged over five yards per carry and more than 30 yards per kickoff return and was unanimous choice for 1965 NFL Rookie of the Year.

In 1966, Sayers led the league in rushing with 1,231 yards.  Despite playing for a fifth-place team, he broke his own single-season all-purpose yardage record and won the first of three Pro Bowl MVP awards.  He was having his finest season in 1968 when Kermit Alexander of the San Francisco 49ers rolled into his right knee, tearing two ligaments and rupturing cartilage.  He underwent surgery and returned to lead the league in rushing [while playing for a 1-13 team] the following year. Sayers was named 1969 NFL Comeback Player of the Year.  He suffered a second knee injury—this time to his left knee—in 1970, effectively ending his career.  After playing in only four games and rushing for 36 yards in two seasons, Mr. Sayers retired following the 1971 campaign.

Knee injuries cut short the career of one of the most sensational running backs in football history.  At the time of his retirement, Gale Sayers was the NFL’s all-time leader in kick returns.  He was Offensive Player of the Game in three Pro Bowls and was the best player in the NFL during his first three years in the league.  He is a member of the College Football Hall of Fame, Black Athlete Hall of Fame, and KU Hall of Fame.  In 1977, Sayers became the youngest inductee [34] in the history of the Pro Football Hall of Fame.  Sayers was elected to the NFL 1960s All-Decade Team and the league’s 75th Anniversary All-Time Team.  The Chicago Bears retired his number 40 and the University of Kansas retired his number 48.

On this date in 1965, Gale Sayers tied an NFL mark for most touchdowns in a game.  On a wet, bone-chilling, see-your-breath day at Wrigley Field in Chicago, the Bears’ rookie halfback scored on runs of 21, 7, 1 and 50 yards.  He also scored on an 80-yard screen pass and returned a punt 85 yards for a touchdown.  Sayers is one of three players in NFL history to score six touchdowns in one game [Ernie Nevers, Dub Jones] and is the only rookie ever to do so.