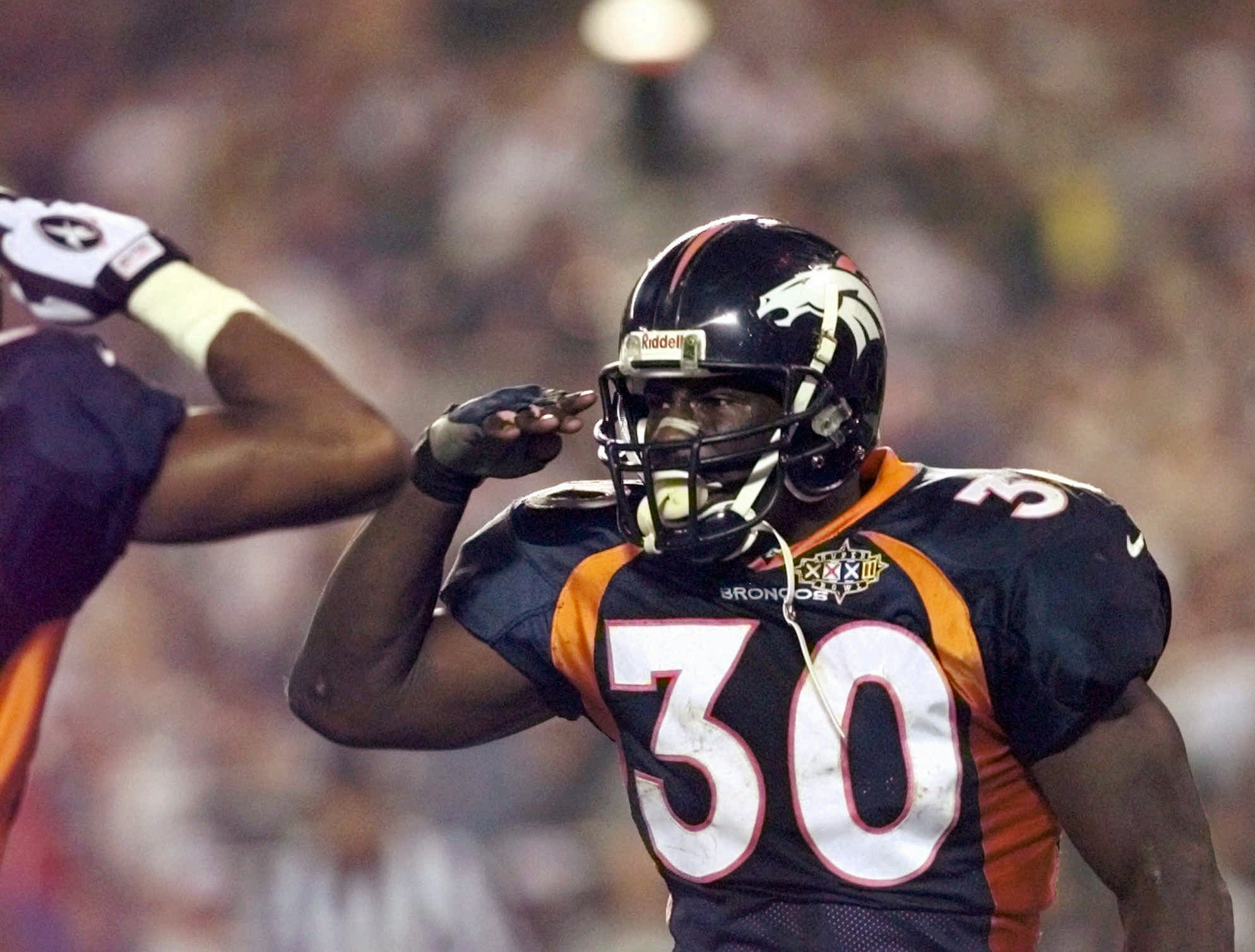 Terrell Lamar Davis is the greatest postseason running back in NFL history.

Born in San Diego, California, on this date in 1972, he was named after Motown artist Tammi Terrell, who sang a number of duets with the great Marvin Gaye, including “Ain’t No Mountain High Enough.” Terrell was the youngest of six boys born to Kateree Davis, a nurse who worked double shifts at a local hospital in order to provide for her family. Davis played Pop Warner football in San Diego and was a standout running back and nose guard, earning the nickname “Boss Hog” from his youth coach. He enrolled at Morse High School but did not apply himself in the classroom or on the football field and transferred to Abraham Lincoln High—alma mater of NFL Hall of Famer Marcus Allen—following his sophomore year in order to get a fresh start. Davis set a school record in the discus throw and played fullback, nose guard and kicker on the football team, leading the Hornets to a 12-2 record in his senior year. He generated little interest from colleges and received only one scholarship offer—from Long Beach State—after his older brother, Reggie Webb, overheard the Long Beach coaches discussing their need for a running back and telling them about “this kid down in San Diego.” Webb, who was from a different father that Terrell, played running back for LBSU and was careful not to reveal to the Long Beach coaches that Davis was his brother. In the fall of 1990, Terrell Davis travelled up the coast and enrolled at Long Beach State to play for legendary coach George Allen, who had led the Washington Redskins to the Super Bowl in 1972. He redshirted his freshman year but saw the field the following season, carrying the ball 55 times for 262 yards with two touchdowns. Allen died during Davis’ redshirt year at Long Beach and the school dropped its football program after the 1991 campaign due to lack of funding, so Davis transferred to the University of Georgia. During his first season in Athens, he backed up future NFL running back Garrison Hearst. Davis emerged as the starter in his junior season and ran the ball 167 times for nearly five yards per carry. He tore a hamstring muscle early in his senior season, forcing him to miss three games, but he finished the season with 113 and 121 yard-games to earn an invitation to the Blue-Gray Football Classic—an all-star game for college seniors—on Christmas Day of 1994. Georgia head coach Ray Goff did little to endear Davis to NFL scouts, portraying him as selfish and injury-prone while denying requests for game film of Davis.

The Denver Broncos selected Terrell Davis with the 196th pick in the 1995 NFL Draft—in the sixth round and behind 20 other running backs. He entered training camp as the sixth-string tailback and was a long shot to make the team, but it was a huge heap of junk food that nearly derailed his career. Denver was playing the San Francisco 49ers in the second game of the 1995 preseason in Tokyo when Davis, who did not think he would get into the game, devoured a halftime meal that included a chili dog, hot dog, French fries and some candy. A special teams coach asked him to cover a kickoff in the fourth quarter and Davis, who was feeling quesy, considered telling the coach that he could not play. Instead, he chose to tough it out and enter the game. Davis raced downfield to cover the kick and hit returner Tyronne Drakeford so hard that the ball carrier flew back three yards. Davis returned to the sideline, vomited all of the junk food he’d just eaten, and was later sent back into the game to play running back. His performance so impressed Denver coaches that he was given a chance to earn a spot as the Broncos’ starting tailback, which he did before the season opener. Davis started 14 games during the 1995 season, carrying the ball 237 times, averaging 4.7 yards per carry and scoring eight touchdowns. He finished the season with 1,117 rushing yards to become the lowest-drafted player ever to gain over 1,000 yards in his rookie year. Following the season, Denver rewrote Davis’ $ 131,000 rookie contract to $ 6.8 million over five years. “TD” responded in kind, rushing for a franchise-record 1,538 yards and 13 touchdowns to earn the AFC rushing title while being named first team All-Pro and NFL Player of the Year. The following season, Davis rushed for 1,750 yards and scored 15 touchdowns while leading the Broncos to the franchise’s fifth Super Bowl appearance. In the title game, Davis rushed for 157 yards, caught two passes and became the first player in Super Bowl history to score three rushing touchdowns as Denver beat the Green Bay Packers to earn the club’s first-ever Lombardi Trophy. “TD” was named MVP of the game despite having to sit out the second quarter due to a migraine headache.

In 1998, Davis rushed for 2,008 yards to become the fourth player in NFL history to surpass 2,000 yards in a single season. He earned league MVP honors, his third consecutive AFC rushing title and a third straight All-Pro selection. The Broncos returned to the Super Bowl and successfully defended their title by beating the Atlanta Falcons, 34-19, with Davis rushing for 102 yards on 25 carries. It was Davis’ last postseason game, as he tore the ACL in his right knee in the fourth game of the 1999 season and missed the remainder of the year. A lower leg injury limited him to five games in 2000 and Mr. Davis underwent arthroscopic surgery on both knees in 2001 before retiring during the preseason of 2002.

Terrell Davis played in seven NFL seasons but was only healthy for four of them. During that time, he rushed for 6,418 yards [4.8 yards per carry] and 56 touchdowns. Only Earl Campbell and Eric Dickerson had more rushing yards during their first four seasons and no member currently in the Hall of Fame matched Davis’s 56 rushing touchdowns in their first four years. He played in eight playoff games and rushed for over 100 yards in seven of them, an NFL record. He averaged a record 142.5 yards per playoff game—well ahead of John Riggins, who is second on the list with 110 yards per game. Terrell Davis has three of the top 20 postseason rushing performances in NFL history; nobody else appears on that list more than once. Davis played in ten more games than Gayle Sayers– a first-ballot Hall of Famer– and gained nearly 2,700 more yards than the Kansas Comet. Mr. Davis holds 56 Denver Broncos franchise records, was elected to the NFL’s 1990s All-Decade Team and is a member of Denver’s 50th Anniversary Team. Perhaps more importantly, he popularized the “Mile High Salute”, the trademark end zone celebration of the Denver Broncos in the late 90’s.