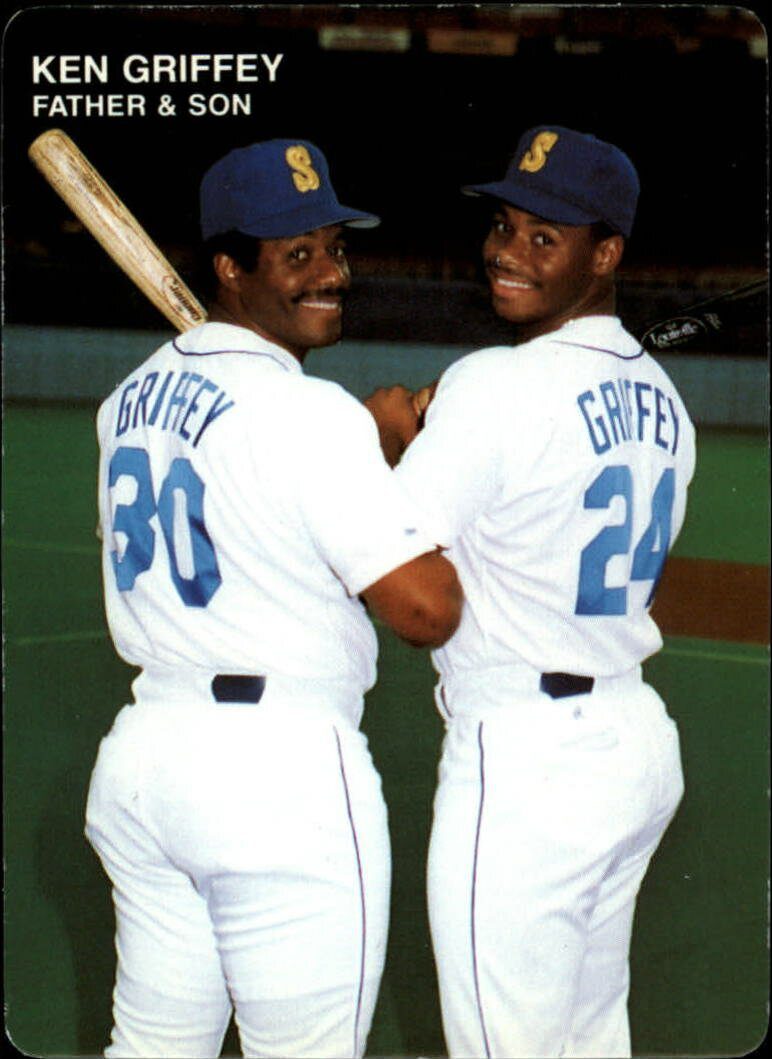 The Griffeys are the first father-and-son tandem to play on the same major league baseball team. George Kenneth Griffey Sr. was born in Donora, Pennsylvania—an industrial town located 20 miles south of Pittsburgh—April 10, 1950.  His father, “Buddy” Griffey, played baseball with Stan “The Man” Musial at Donora High School.  “Ken” was selected by the Cincinnati Reds out of Donora High in the 29th round of the 1969 amateur draft and assigned to their rookie affiliate in the Gulf Coast League.  After working his way up through the organization, he made his big league debut with the Reds in his fifth season, starting in right field and going 2-for-4 against the St. Louis Cardinals at Riverfront Stadium in Cincinnati.  Heading into the final game of the 1976 season, Griffey was in a fierce battle with Chicago Cubs third baseman Bill Madlock for the National League batting title.  Griffey, who led with a .336 average, elected to sit out and protect his title, while Madlock played and collected four hits to finish at .339 to edge him out.  Griffey won two World Series, in 1975 and 1976, while playing for Cincinnati’s “Big Red Machine,” appeared in three All-Star games and was named MVP of the midsummer classic in 1980.  He played for four teams between 1973 and 1991, appearing in nearly 2,000 games.  “Senior” batted .296, hit 152 home runs and drove in 859 runs in 21 big league seasons. George Kenneth Griffey Jr. was born in Donora—Musial’s birthplace–exactly 49 years to the day after Stan The Man entered this world.  His family moved to Cincinnati, where his father played for the Reds, when “Junior” was six.  After being named High School Player of the Year at Cincinnati Archbishop Moeller High School, Griffey was selected by the Seattle Mariners with the first overall pick of the 1987 amateur draft.  He made his major league debut for the Mariners at age 19, going one-for-three in an Opening Day win in Oakland.  Junior was one of the most prolific players of his era.  Always popular with fans, he was instrumental in helping baseball regain its stature as America’s national pastime following the debacle of the MLB players’ strike in 1994.  Griffey appeared in 13 All-Star games and, like his father, was a midsummer classic MVP [1992].  A superb five-tool player, “The Kid” won ten Gold Gloves playing centerfield, the most demanding outfield position.  He led the AL in home runs four times and ended his 22-year career with 630 homers, fourth-most all-time amongst players that did not use steroids.  Junior is one of 29 players in baseball history to have played in four different decades and his Number 24 was retired throughout the entire Mariners system, including minor league affiliates.  Ken Griffey Jr. was elected to the Baseball Hall of Fame in 2016.  He received 99.3 percent of the votes, the highest in history. Stan Musial was one of the greatest players in the history of baseball.  And he may not even be the best ballplayer born in Donora, Pennsylvania, on November 21.  Like Junior, Musial played outfield.  He also batted and threw left-handed.  Both played 22 seasons, won a league MVP award, were inducted to Cooperstown, and are members of MLB’s All-Century Team.  Quite a remarkable coincidence. For a father and son to play on the same major league baseball team is not simple.  First, the father has to be a big league player, and one that is healthy and productive enough to play for decades.  The son has to be talented enough to not only reach the bigs, but to do so at an early age.  Then, a team must have a need for both in their lineup at the same time.  No easy task. In August 1990, Ken Griffey Sr. accepted his release by the Reds, passed through waivers, and was picked up by the Mariners.  He was 41 years old.  Junior was 20 and coming off his first All-Star game.  On this date in 1990, Ken Sr. found himself starting in left field and batting second against the Kansas City Royals, with Junior hitting right behind him.  Facing Storm Davis in his first-ever at-bat for the Mariners, he laced a one-out single up the middle.  One batter later, Junior singled to right field.  Not only was this the first father-son team ever to be in the same lineup together, it was the first father-son duo to be on the base paths together.  Both would come around to score later in the inning as Seattle went on to win, 5-2. Most fathers and sons play a game of catch together.  The Griffeys got to share a month together playing in the major leagues.  On September 14, 1990, half a month after playing their first game together, the duo hit the only back-to-back home runs in MLB history.  In the top of the first inning of a game against the California Angels in Anaheim, Senior lined a two-run homer to deep left-centerfield off Kirk McCaskill.  Junior followed one batter later with a solo shot to the same spot.  The Griffeys were reunited when Senior was coaching the Reds and Junior joined the team in 2000 and were in uniform together with Team USA at the 2006 World Baseball Classic.  On October 2, 2001, Tim Raines Sr. and Jr. played in the outfield together for the Baltimore Orioles, the second and most recent father-son tandems to play on the same major league team.