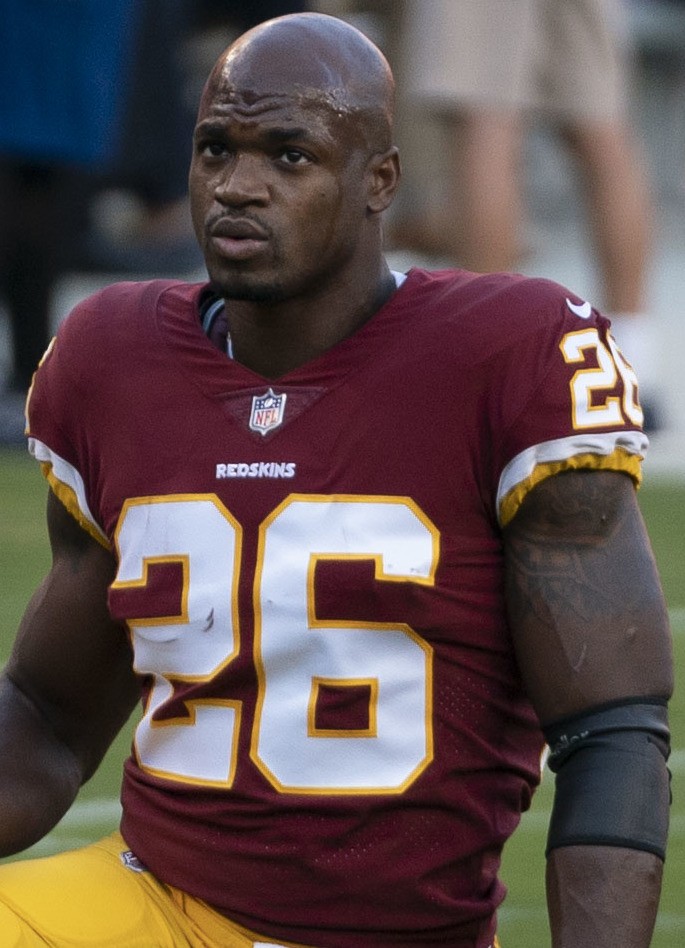 Adrian Lewis Peterson may be the greatest high school football player of all time.  He was so good that, as a senior, opposing teams would ask for his autograph after the game.

Born in Palestine, Texas— a small, East Texas town equidistant from Dallas, Houston and Shreveport—on this date in 1985, he was the younger of two boys born to parents who were former college athletes.  His father had played basketball at Idaho State and signed to play professionally in Puerto Rico before a gun accident nearly cost him his leg.  At seven, Peterson saw his best friend and older brother, Brian, killed by a drunk driver while riding his bicycle near the family’s house in Dallas.  Six years later, he saw his father–who began laundering drug money to supplement his eight-dollar-an-hour job driving a forklift at Walmart–arrested and sentenced to eight years in prison.  Peterson learned to deal with pain through sports.  He idolized Emmitt Smith and was such a standout running back for his local Pop Warner football team that the coach told his players to “remember playing with Adrian.  You will want to tell your grandkids about him someday.”  Peterson’s mother, Bonita Jackson, had been a three-time state sprint champion at Palestine’s Westwood High School before accepting a track scholarship to the University of Houston.  Jackson returned to her home town, enrolling Adrian at Palestine High School, alma mater of 1961 Heisman Trophy finalist Jimmy Saxton.  Peterson excelled at track, running 10.26 to win the state title at 100 meters, and his coach believed Peterson could have become an Olympic sprinter had he not chosen football where, as a junior, he rushed for 359 yards and six touchdowns in his first varsity game.  After rushing for over 2,000 yards and 22 touchdowns as a junior, Peterson attracted attention from colleges throughout the country, including Texas, Miami, UCLA and Texas A&M.  As a senior, “AP” rushed for nearly 3,000 yards, scored 32 touchdowns and averaged 11.7 yards per carry while sitting out the second half of most games.  Prior to his final high school game, PHS head coach Jeff Harrell asked his star running back to “do something special,” and Peterson, listed by Rivals.com as the top player in the nation, ran for 350 yards and six touchdowns—all in the first half.  Peterson won the Hall Trophy as U.S. Army National Player of the Year and was named the best high school player in America by several publications, including ESPN, who later voted him “High School Player of the Decade” for 2000s.

A five-star high school football player is considered a rare prospect, a player that should make an impact as a true freshman and has the potential to be a high draft pick in the NFL.  Coming out of high school, Adrian Peterson–one of the most coveted five-star recruits ever to play—was so good that many considered him good enough to go directly to the NFL [which league rules do not allow].  “AP” narrowed his choices to Oklahoma and USC before choosing OU, where he was named consensus All-American after rushing for an NCAA-record 1,925 yards as a true freshman.  Peterson finished second to Matt Leinart for the 2004 Heisman Trophy, seven spots ahead of Aaron Rogers, who ranked behind quarterbacks Jason White and Jason Campbell.  Despite being limited by injuries in his sophomore and junior years, Peterson rushed for over 4,000 yards and 41 touchdowns in only 31 games as a Sooner, finishing his three-year career just 73 yards shy of Billy Sims all-time school rushing record and leaving following his junior season.

After running the 40 yard dash in 4.4 seconds at the NFL Combine, the Minnesota Vikings selected Adrian Peterson with the seventh pick of the 2007 NFL Draft, six spots after the Oakland Raiders chose JaMarcus Russell.  In November, he broke the NFL single-game rushing mark by gaining 296 yards against the San Diego Chargers before finishing the season with 1,341 yards to earn Offensive Rookie of the Year honors.  The following year, he won the league rushing title.  In the 12th game of the 2011 season, Peterson suffered tears to ACL and MCL ligaments in his knee, ending his year and creating doubts about his future.  Nine months later, he came back to rush for 2,097 yards—second most in league history—en route to being named NFL MVP, Offensive Player of the Year and Comeback Player of the Year.  After being suspended by the NFL for the 2014 season on child abuse charges, “AP” returned to lead the league in rushing in 2015.

Adrian Peterson has rushed for over 1,000 yards in seven of his eight NFL seasons, finishing just 30 yards shy of that mark in 2011 due to injury.  He is one of eight players in league history with three rushing titles and only two players [Eric Dickerson, Jim Brown] have gotten to 10,000 career rushing yards in fewer games.  Mr. Peterson is one of seven running backs in NFL history to rush for over 2,000 yards in a single season and is the greatest runner in Minnesota Vikings history.  Peterson has played in seven Pro Bowls and was named MVP of the 2008 game.  Happy 31st birthday to one of the NFL’s best players.