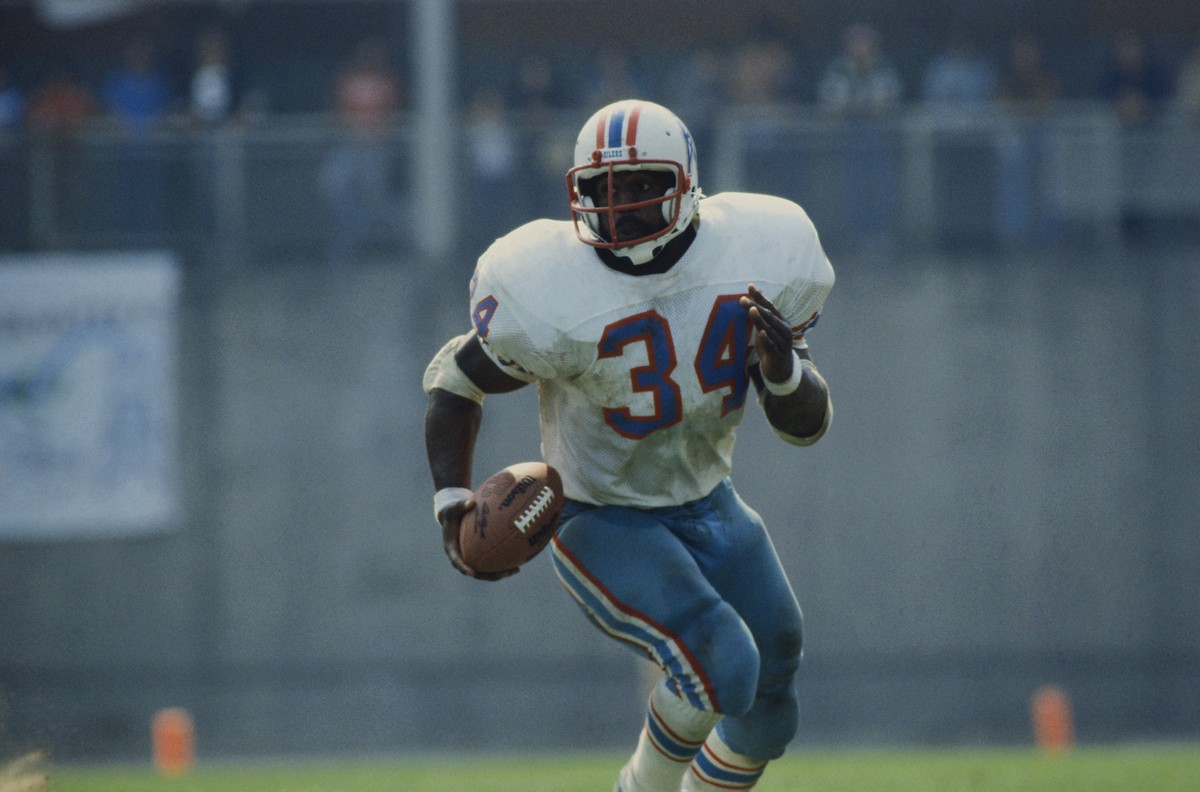 One of the most powerful runners in football history began his career as a kicker on a flag football team.

Earl Christian Campbell was born in Tyler, Texas, the “Rose Capital of the World,” March 29, 1955.  Earl was the sixth of eleven children born into a poor family.  His father, who worked days in the rose fields and nights at a local K-Mart, died from a massive coronary when Earl was eleven, leaving the family in dire financial straits.  Campbell turned to athletics to cope with his anger, earning a spot as the kicker for his fifth-grade flag football team.  Inspired by his boyhood hero, Dick Butkus, Campbell moved to middle linebacker the following year, his first season playing tackle football.  As a freshman at John Tyler High School in 1970, he missed several fall practices and was relegated to the “B” team.  Following an attitude adjustment, Campbell was promoted to the “A” squad and was named Newcomer of the Year.  In his junior season, Campbell played linebacker and was named high school All-American.  The following year, his twin brothers Tim and Steve joined the varsity, where Earl had emerged as running back.  In his only full season as a running back, Campbell led the Lions to an undefeated season and a victory in the Texas 4A state title game—played in the Houston Astrodome– where he rushed for over 200 yards.  The “Tyler Rose” averaged 225 rushing yards per game in his senior season and was named All-American.  Considered the best running back in the country, he narrowed his college choices to Texas and Oklahoma.  The Sooners were coached by Barry Switzer, who said, “Earl Campbell was the only player I ever saw who could have gone from high school straight to the NFL and immediately become a star.”  After a University of Texas assistant coach spent 17 straight days in Tyler recruiting Campbell, the Tyler Rose committed to play for the Longhorns.

Upon Campbell’s arrival in Austin, head coach Darrell Royal handed him a tape of Jim Brown [Daily Dose, October 20].  Having never seen Brown perform, the freshman was entranced and immediately decided to pattern his style after the Hall of Famer.  “I couldn’t dance.  I only had two choices, run you over or give you a good stiff-arm.”  Campbell started as a true freshman, rushing for 928 yards while earning All-Southwest Conference honors.  The following year, he gained 1,118 yards, scored 13 touchdowns and was named All-American.  After a hamstring injury forced Campbell to miss four games of his junior season, he turned in one of the greatest campaigns in college football history, as a senior.  The Tyler Rose led the NCAA in rushing, touchdowns and points scored while averaging 6.5 yards per carry.  He was named All-American and won the 1977 Heisman Trophy, becoming the first player in UT history to earn that coveted award.

The Houston Oilers of the early 1970s had fallen upon hard times.  In 1975, Bum Phillips—a “good ole boy” who dressed in cowboy boots and ten gallon hats, was hired to coach the team.  In the spring of 1978, the Tampa Bay Buccaneers, who held the first spot in the draft after finishing  2-12 the previous season, traded the pick to the Houston Oilers in exchange for tight end Jimmie Giles and Houston’s first and third round picks in the 1978 draft along with their third and fifth round choices in 1979.  Phillips wasted no time in making Earl Campbell the first overall selection and the 5”11, 232 pound bruiser did not disappoint.  In his first season, he was named Rookie of the Year, NFL Offensive Player of the Year and league MVP.  In a Monday night game in November, Campbell dazzled a national television audience, rushing for 199 yards and four touchdowns to lead the “Luv Ya Blue” Oilers to a 35-30 victory over the Miami Dolphins in what Howard Cosell [Daily Dose, January 4] called, “The greatest football game I have ever broadcast.”  Campbell led the NFL in rushing and was named league MVP in each of his first three seasons, averaging over 350 carries, 1,600 yards and 13 touchdowns in each.  He played six seasons in Houston, rushing for over 1,000 yards five times.  Fans began calling the team the “Houston Earlers.”  By 1983, too many carries, too much punishment and too many cortisone shots had slowed Campbell and the Oilers traded him to New Orleans, where he played his two final seasons before retiring in 1985.

Earl Campbell was one of the greatest power backs ever to play the game.  He ran 100 meters in 10.6, had 34 inch thighs and covered the 40 in 4.5 seconds.  Mr. Campbell, along with Paul Hornung and O.J. Simpson, are the only Heisman winners to be drafted first overall and be inducted into the Pro Football and College Football Halls of Fame.  Campbell was a five time Pro Bowler and, along with Jim Brown, is the only player to lead the NFL in rushing in each of his first three seasons.  He was voted All-SWC in each of his four seasons at Texas, where he once raced full speed through the corner of the end zone after scoring a touchdown and plowed into Bevo, the school’s 1,700 pound mascot [Daily Dose, November 20].  Bevo took the blow, stumbled backward, and stayed on his feet.  UT retired Number 20 and the Earl Campbell Tyler Rose Award is given annually to the best player in NCAA football with Texas ties.  Mr. Campbell rushed for over 200 yards four times in the 1980 season—still the NFL record–and was named to the NFL’s 1970s All-Decade Team.

On this date in 1978, the Houston Oilers selected Earl Campbell with the number one pick of the NFL Draft.