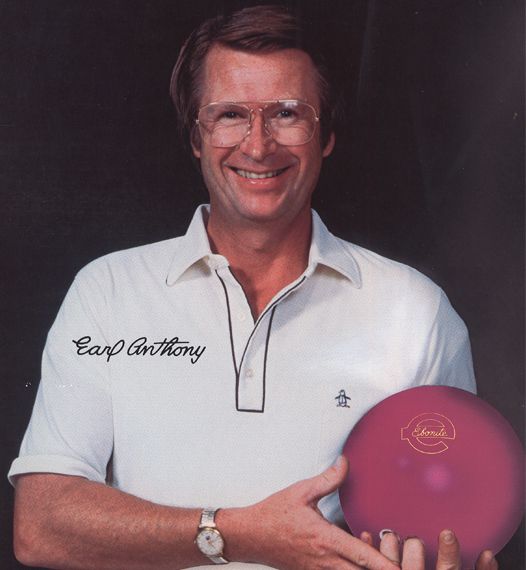 The greatest ten pin bowler in history was also a scratch golfer.

Born in Tacoma, Washington, April 27, 1938, Earl Roderick Anthony was a superb athlete.  He grew up in Kent—located midway between Seattle and Tacoma along Interstate 5—and joined the United States Air Force before finishing high school.  He played baseball in the Air Force and, in 1960, earned a tryout with the Baltimore Orioles’ [Daily Dose, 7/11/16] Pacific Coast League affiliate in Vancouver.  A hard-throwing left-handed pitcher, Anthony’s baseball days ended after suffering an ankle injury while covering first base.

He returned to Tacoma and got a job driving a forklift at a supermarket, where he was coaxed into joining a bowling league after work.  Anthony had worked as a pin-setter as a kid but had never bowled, but soon he was averaging over 200.

He joined the Professional Bowlers Association [PBA] Tour briefly in 1963, went winless, and returned to his grocery job.  Anthony continued bowling three nights a week and earned a few bucks in local tournaments.  In 1969, he tried the Tour again and finished second in his first tournament.  Anthony’s first win came June 7, 1970, at the Heidelberg Open in Seattle.  After winning in New York the following year, Earl Anthony was on his way to the top.

Dick Weber, who was a founding member of the PBA in 1958 and the sports’ biggest star in the 1960s, is considered bowling’s Arnold Palmer [Daily Dose, 7/1/16].  In the decade of the 1970s, Anthony followed Weber just as Jack Nicklaus replaced Arnie.  Never brash or flashy, “Earl the Pearl” wore a crew cut and plastic framed “marshwood” style glasses for much of his career.  From the mid-1970s to the early 80s, he was the face of professional bowling.

Anthony amassed 43 titles and was voted “Bowler of the Year” six times.  He won ten major championships, tying him with Dick Weber’s son, Pete, for most of all time and was always on TV.  “He was as smooth as the pin-setter,” observed Hall of Fame commentator Chris Schenkel, who covered bowling for ABC Sports for over 30 years, “his temperament determined his ability to win.”  Anthony had 25 career perfect games—sadly, not one was on TV.

Between 1970 and 1984, he won at least one PBA title and he reached the championship round [top five bowlers] a record 144 times in his illustrious career.  Earl Anthony increased bowling’s popularity in the United States.  “He was just Mister Bowling,” said Jim Zebehazy, executive director of the Young American Bowling Alliance.  Dubbed “Square Earl” by his fellow competitors for his simplicity, Anthony rolled strike after strike, without a hair out of place.

His smooth, steady, left-handed delivery was a thing of beauty and the clutch, consistent way he knocked pins down made him the face of professional bowling for over a decade.  Mr. Anthony won the George Young High Average Award five times and appeared in a record 15 televised finals appearances in the same season two times—in 1975 and 1981.

After winning the 1978 Tournament of Champions and passing Dick Weber to become the first to reach 30 career titles, Weber—who was calling the event alongside Schenkel—proclaimed Anthony the “undisputed king of bowling.”  In 2000, he was voted “Master of the Millennium” by a wide margin.

The PBA celebrated an anniversary in 2008 by commissioning a panel of experts to rank the 50 greatest bowlers of the last 50 years.  Earl Anthony ranked first, ahead of Walter Ray Williams Jr., who holds a record 47 PBA Tour titles.  “I feel Earl’s record is better than mine,” conceded Williams, “because it was more condensed.

Earl bowled 14 years and 400 events.  I’ve bowled well over 600, maybe 700.”  Dick Weber dubbed Anthony, “The greatest speed control bowler ever.”  Williams added, “When Earl retired, he didn’t have anyone to push him.  He probably would have kept going to 50 [wins] if that were the case.”  A scratch golfer, Mr. Anthony shot a course-record 64 at Crow Canyon Country Club in Danville, California.

In a 1999 Sports Illustrated poll ranking the best sports figures from each of the 50 states, Earl Anthony finished second to John Stockton [Daily Dose, 4/18/16] as the greatest from the state of Washington.  He was elected to the PBA Hall of Fame in 1981 and ABC [now USBC] Hall of Fame in 1986.

Yesterday marked the 15th anniversary of Earl Roderick Anthony’s passing.  On August 14, 2001, he died from head injuries sustained after falling down a flight of stairs in a friend’s home in New Berlin, Wisconsin.  Mr. Anthony was 63 and is survived by his wife, Susie, and a son and two daughters.