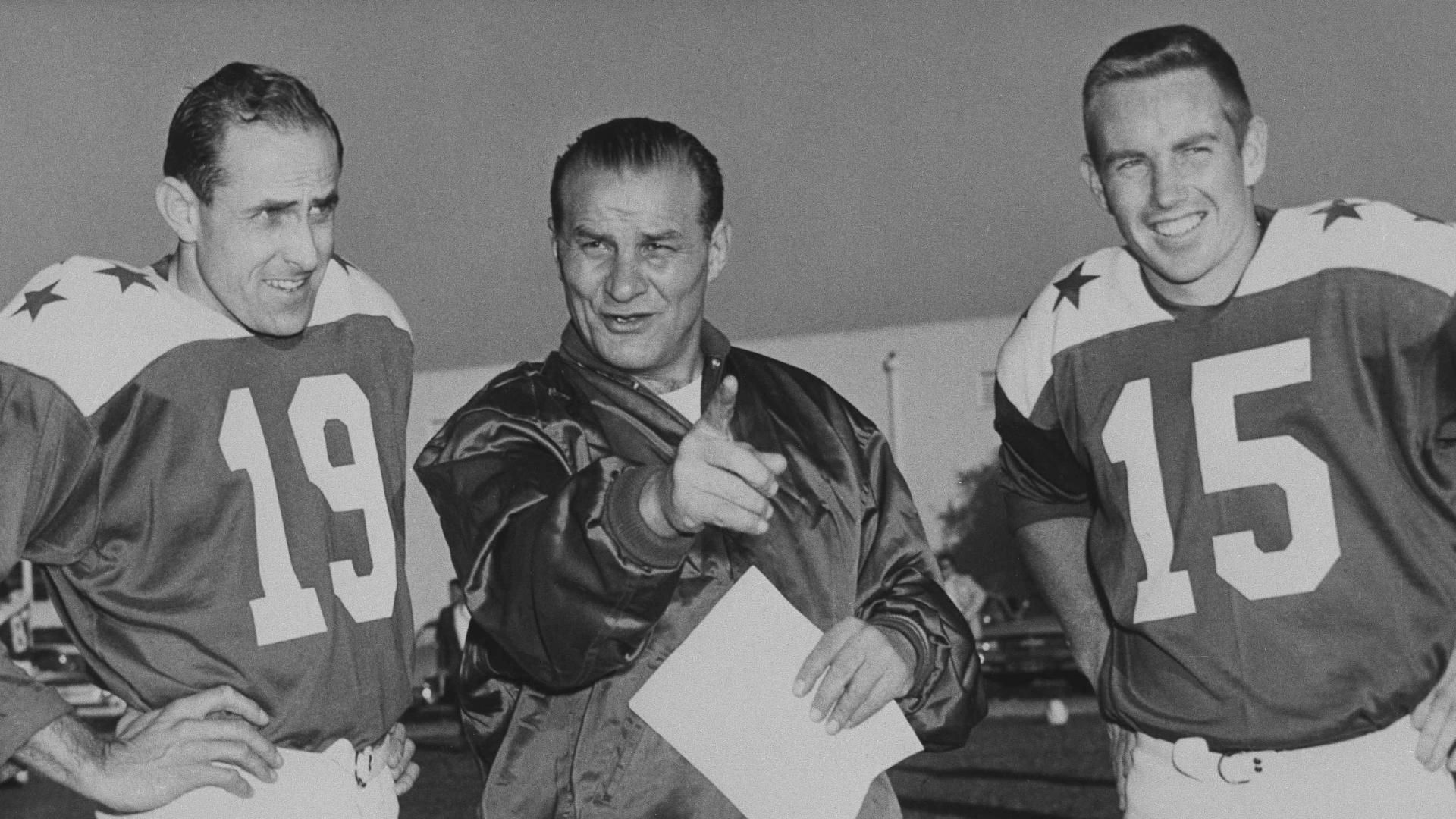 Sid Gillman is the father of football’s modern-day passing game.

An innovative coach and dynamic administrator for more than six decades, Gillman was the authority on passing theories and tactics.  “The big play comes from the pass,” preached Gillman.  “God bless those runners because they get you a first down, give you ball control and keep your defense off the field.  But if you want to ring the cash register, you have to pass.”

The only coach inducted into both the Pro Football Hall of Fame [1983] and College Football Hall of Fame [1989],  Gillman coached collegiately for 21 years.  He then coached 18 pro seasons, where he was the first to win divisional titles in both the NFL and AFL.  Sid Gillman preceded Vince Lombardi at Army, Paul Brown at Ohio State, and Woody Hayes at Denison College.

Gillman was a true innovator.

The run game was king when he began his football career.  Gillman was the kind of football genius that goes overlooked by today’s average fan, but who will never be forgotten by the coaches he directly – and indirectly – impacted.  The first to hire a strength coach and first to put players’ names on the backs of jerseys.  Gillman revolutionized the use of game and practice film to study an opponent and prepare his team.  A tireless worker and stickler for detail, he developed the modern two-platoons system, and introduced motion to neutralize defenses.

“Sid was something of a rocket scientist when it came to offensive football and the passing game,” said Chuck Noll, who served on Gillman’s staff before guiding the Pittsburgh Steelers to four Super Bowl titles.  “He saw things other coaches hadn’t seen.  And he wasn’t afraid to put his ideas into action.”

The Sid Gillman coaching tree could more accurately be described as a forest and is rivaled only by that of Paul Brown.  Descendants include Bill Walsh, George Allen, Noll, John Madden, Al Davis, Tony Dungy, Dick Vermeil, and Joe Gibbs.  In all, coaches who worked under Gillman have gone on to win 25 Super Bowls.

His wide-open, downfield passing attack was copied throughout the AFL, and his offense helped put the upstart league on the map.  Gillman won five division crowns and one league title in the AFL’s first six years of existence.

In 1963, the Chargers won the AFL Championship – the only major sports title by a San Diego team – with a 51-10 trouncing of the Boston Patriots.  Immediately after that win, Gillman approached NFL Commissioner Pete Rozelle with a plan to have the Chargers play the NFL champion Bears.  The idea became the impetus for the Super Bowl, which was first played four years later.

Born October 21, 1911, in Minneapolis, Sidney Gillman attended Ohio State University, where he was team captain and an All-Big Ten end.  He played in the first College All-Star Classic, an annual exhibition staged between a team of top collegiate seniors and the defending NFL champions, in 1934, and coached in the last one, in 1976.

After one year of playing professional football, Gillman turned to coaching, serving as an assistant first at Ohio State and then at Denison.  In 1944, he was named head coach at Miami, birthing a tradition that would come to be known as the Cradle of Coaches.  At Miami, Gillman recruited and coached future College Football hall of famers Ara Parseghian and Bo Schembechler.

Sid Gillman coached the offensive line at Army for just one season.

Before he left in 1948, he offered head coach Red Blaik a recommendation for his replacement – a Fordham assistant named Vince Lombardi.  Gillman left West Point to become head coach at the University of Cincinnati, where headed up the Bearcats program for six seasons.  In 1955, after compiling a record of 81-19-2 as a college head coach, Gillman returned to pro football.

Gillman led the Rams for five seasons, guiding them to the 1955 West Division title before falling to the Cleveland Browns in the NFL Championship Game.  In 1960, Gillman was persuaded by Barron Hilton, majority owner of the Los Angeles Chargers of the newly-formed American Football League, to become the first head coach in franchise history.

The then 48-year-old Gillman brought instant class and professionalism to the AFL.

A brilliant strategist, he took Lance Alworth, a running back from Arkansas, and turned him into “Bambi” – the best wide receiver in AFL history.  Gillman drafted John Hadl, a triple threat back from Kansas, and developed him into one of the game’s most deft passers.  Gillman mentored Keith Lincoln and Paul Lowe, two of the league’s top running backs, and relied on the great Ron Mix to anchor his offensive line.  “We admired him completely and feared him greatly,” said Mix, who was named right tackle on the AFL All-Time Team before landing in the Hall of Fame in 1979.  “If you double-crossed Sid Gillman, you could find yourself on a bus out of town.”

He and Hank Stram are the only coaches to guide their teams during the entire decade of the AFL’s existence.  Both were named to the AFL All-Time Team in 1970.

After stepping away from football in 1971 for health reasons, Gillman was named GM of the Houston Oilers in 1973.  Five games into his first season, he fired head coach Bill Peterson and named himself successor.  Gillman returned the Oilers to respectability and was named 1974 NFL Coach of the Year.

Three years later, Gillman took over as offensive coordinator in Chicago, where he led the Bears to their first playoff berth in 14 years.  Following the 1977 season, Gillman quit when Bears head coach Jack Pardee took away his play-calling duties.

In 1980, Vermeil hired Gillman as his quarterback’s coach, where he worked with a young Ron Jaworski, then in his third season with the Philadelphia Eagles.  After directing the Eagles to the Super Bowl, Jaworski was named NFC Player of the Year.  “We never would have made it to the Super Bowl if not for Sid Gillman,” said Vermeil after the season.  “When we hired him, we hired an encyclopedia.”

In July 1983, 71-year-old Sid Gillman came out of retirement to join the Oklahoma Outlaws of the expansion USFL.  The following season, he served as a consultant for the L.A. Express.  Mr. Gillman is the winningest coach in Chargers history and was named to the franchise’s 40th and 50thAnniversary Teams.

The progenitor of offensive football, Gillman’s philosophies are part of the fabric of the game.  “SidGillman is still the father of the modern-day passing game at all levels of football:  the NFL, college, high school, and even down to Pop Warner,” said Jaworski, now an analyst with ESPN.  “The concepts that he developed are still being used at every level of football.”