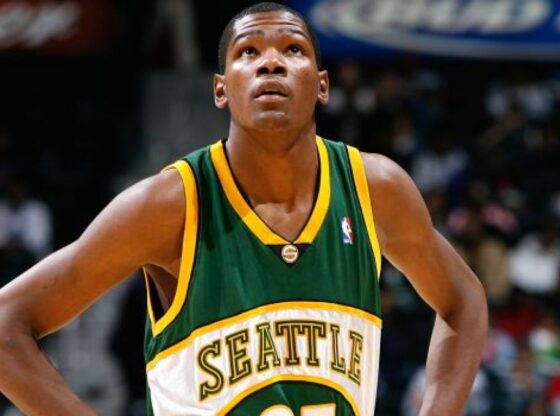 Before becoming the Oklahoma City Thunder in 2008, the SuperSonics spent four decades in Seattle.

On December 20, 1966, Seattle was granted the NBA’s 11th franchise.  A week-and-a-half later, the federal government selected the Seattle-based Boeing Corporation to build the country’s first supersonic transport [SST], and fans selected SuperSonics as the team name.

With the San Diego Rockets, the SuperSonics entered the NBA as an expansion team for the 1967-68 season.  Coached by Al Bianchi, the Sonics went 23-59 in their inaugural campaign, finishing fifth in the Western Division.  A dozen years later, they beat the Washington Bullets to win the only NBA title in franchise history.

The Sonics’ original owner, Sam Schulman, was a movie producer who had purchased the San Diego Chargers for a then-record $ 10 million in June 1966.  Schulman served as team president and head of operations for the franchise’s first 16 years of existence.  In 1983, he sold the Sonics to media executive Barry Ackerley, who owned the team until 2001.  Between 2001 and 2006, the team was owned by the Basketball Club of Seattle, headed by Starbucks chairman Howard Schultz.  In October 2006, Oklahoma City businessman Clay Bennett bought the SuperSonics.

Originally known as Seattle Center Coliseum, KeyArena was the Sonics home for 33 of their 41 seasons in Seattle.  Located in the Lower Queen Anne neighborhood, the 17,000-seat venue is part of a 74-acre entertainment complex known as Seattle Center.  The Sonics played at the Coliseum from their inaugural season through 1978, when they moved to the Kingdome, a characterless monstrosity they shared with the NFL Seahawks and MLB Mariners.  The team moved to the Tacoma Dome, 30 miles south of Seattle, for the 1994-95 season while the Coliseum was renovated.  The SuperSonics returned to their original home – rebranded as KeyArena – in 1995.

That same year, King County voters approved a funding package for Safeco Field, which became the Mariners state-of-the art home in 1999.  In June 1997, voters approved funding for Seahawks Stadium [now CenturyLink Field], which was built on the on the site of the Kingdome and opened in 2002.

The Sonics had 15 head coaches, including hall-of-famers Lenny Wilkens, Bill Russell, and K.C. Jones.  Wilkens served as player-coach from 1969 to 1972, then was dealt to the Cleveland Cavaliers in a highly unpopular trade.  After retiring as a player, the nine-time All-Star returned to coach the Sonics in 1977, leading them to the NBA Finals – and the 1979 NBA title — in his first two years at the helm.

In 41 seasons in the Emerald City, the Sonics went 1,852-1,695, for a winning percentage of .522.  They won six division titles and three Western Conference Crowns, earning trips to the NBA Finals in 1978, 1979 and 1996.  The 1996 team posted a franchise-best record of 64-18.  Led by Gary Payton and Shawn Kemp, Seattle lost to Michael Jordan and the Chicago Bulls in six games.  Nicknamed “The Glove” for his defensive prowess, Payton is the Sonics’ all-time leader in assists, points, steals, field goals and games played.

The 1996 team was led by George Karl, the most successful coach in Sonics history.  In the five seasons between 1994 and 1998, Karl won four division titles and finished second in the other.  The SuperSonics went 384-150 and averaged 58 wins per season under Karl, second only to Chicago during that span.  Seattle enjoyed their longest sustained success in franchise history during Karl’s tenure, making the playoffs in each of his seven seasons.  One of only nine coaches in NBA history to win 1,000 games, Karl left Seattle in 1998 to take over the reins of the Milwaukee Bucks.

The Sonics franchise retired six numbers and one microphone.  Gus Williams, Jack Sikma and “Downtown” Freddie Brown were cornerstones of the 1979 world championship team.  Nate McMillan and Wilkens were superb point guards and long-time Sonics head coaches.  Spencer Haywood was Seattle’s first superstar.  After winning the landmark lawsuit that paved the way for early entry into the NBA draft [prior to the Supreme Court ruling, NBA rules precluded players from joining the league until four years after high school] Haywood set single-season franchise scoring and rebounding records.  The original play-by-play voice of the Sonics, Bob Blackburn, called games on radio and TV from 1967 to 1992, when he was forced out by Ackerley after 25 years with the club.  As Seattle as the Space Needle, the team hoisted a banner honoring “The Voice” a few years after his departure.

After efforts to provide $ 220 million in public funding to upgrade KeyArena – which had been deemed inadequate – failed, Schultz’ ownership group sold the Sonics to Bennett for $ 350 million in fall 2006.  When Washingtonians wisely declined to fund a new $ 500 million arena in the Seattle suburb of Renton, Bennett decided to move the team to Oklahoma City.  Legal efforts by the city of Seattle to keep the Sonics in the Emerald City failed, and the team became the Oklahoma City Thunder prior to the 2008-09 season.  Settlement terms of the lawsuit stipulated that the SuperSonics’ banners, trophies and retired jerseys remain in Seattle.  The nickname, logo and green, gold and white colors remain available to Seattle’s next NBA team.

On this date in 2008, the Seattle Supersonics lost to the Los Angeles Lakers, 130-105, on their way to a 20-62 record, the worst in franchise history.  Less than a month later, they played their final game in Seattle then moved to Oklahoma City

Ironically, the drive-in fast food restaurant chain, Sonic, is based in Oklahoma City.