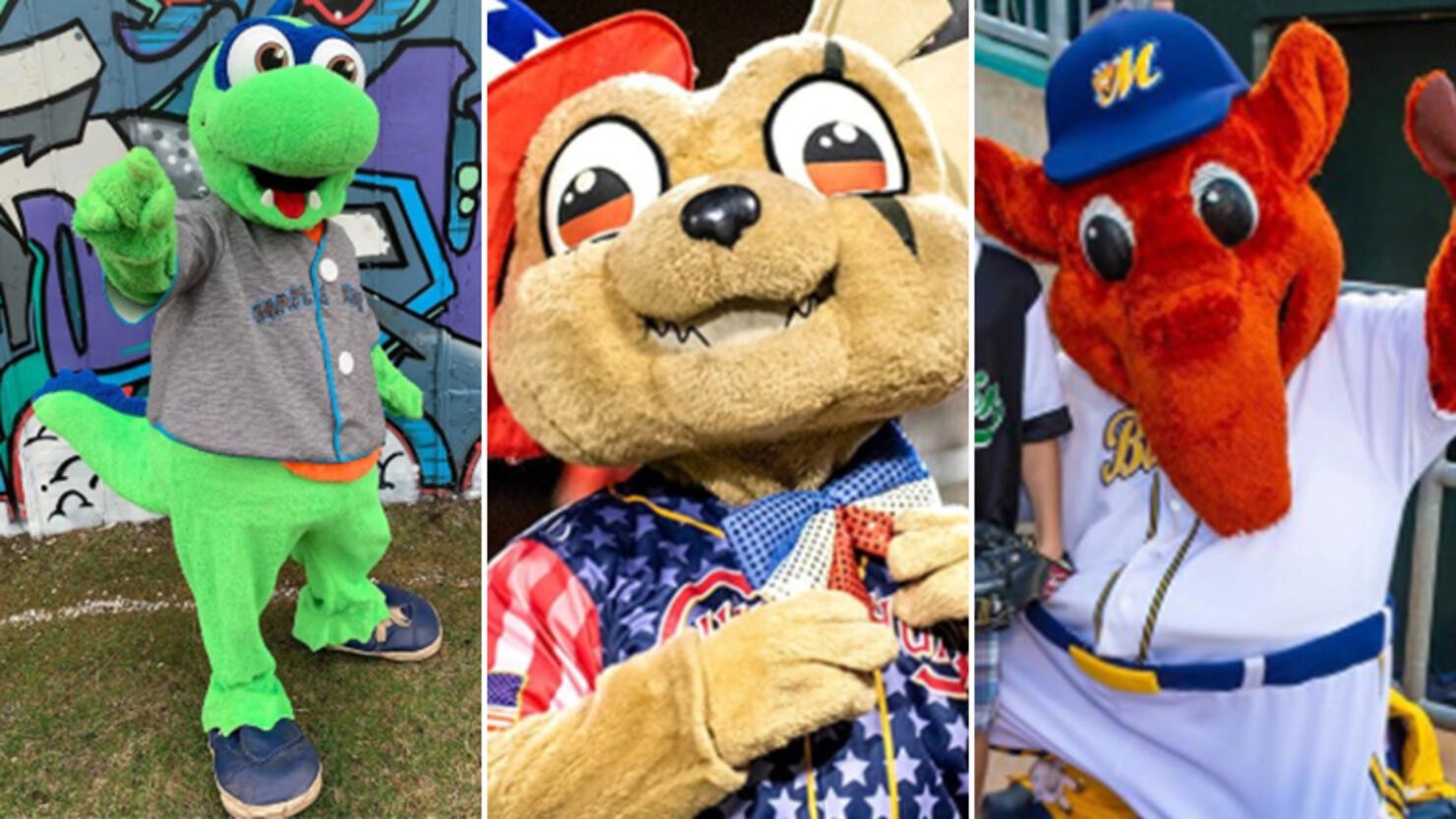 John Chapman was a nurseryman who introduced apple trees to several states in America’s Heartland, including Indiana.  Better known as Johnny Appleseed, who wore a tin cooking pot on his head, Chapman spent his final years in Fort Wayne, where he is buried.  Following the 2008 season, Fort Wayne’s Class-A affiliate for the San Diego Padres changed its name from Wizards to TinCaps in honor of Johnny Appleseed.  The TinCaps franchise is the oldest in the Midwest League, which began in 1947 as the Illinois State League.  Following stops in Iowa and Wisconsin, the club arrived in Fort Wayne in 1993.  The TinCaps play home games at Parkview Field, which opened in 2009 as part of the downtown Harrison Square revitalization project.  In 2009, the TinCaps won the Midwest League championship while setting a single-season attendance record, when 378,529 fans poured through the turnstiles at Parkview Field.

From 1972 to 2000, the Albuquerque Dukes were one of the most successful franchises in minor league history.  As the Triple-A affiliate of the Los Angeles Dodgers, the Dukes featured several players and coaches who went on to legendary big league careers, including Tommy Lasorda, Mike Piazza, Pedro Martinez and Orel Herschiser.  After moving to Portland and then Tucson, the franchise settled in El Paso, Texas, in 2014.  In a name-the-team contest prior to their inaugural season in El Paso, Chihuahuas was chosen over Aardvarks, Sun Dogs, Desert Gators, and Buckaroos.  The name is in reference to the Mexican State of Chihuahua, which sits across the border from El Paso.  The Chihuahuas are the Triple-A affiliate of the San Diego Padres and play in 9,500-seat Southwest University Park, which was named “Best New Ballpark” for 2014 by Ballpark Digest.  The Chihuahuas play in the Pacific Coast League.  In 2016, they won the PCL title after beating the Oklahoma City Dodgers in extra innings.

The Chattanooga Lookouts have one of the richest histories in minor league baseball.  In 1931, the New York Yankees played them in an exhibition game.  During the game, Jackie Mitchell—a seventeen-year-old girl and local legend—pitched for the Lookouts and struck out Babe Ruth [Daily Dose, 9/24/15] and Lou Gehrig in succession.  Miss Mitchell featured a “drop ball”–a pitch she learned from Dazzy Vance, her next-door neighbor.  Vance led the National League in strikeouts seven times in his hall-of-fame career.  Following the performance, baseball commissioner Kenesaw Mountain Landis voided Mitchell’s contract and declared baseball “too strenuous” for women.  A Double-A affiliate since 1932, the team is named for the nearby Lookout Mountains, from which seven states can be seen.  The Lookouts have been affiliates of the Dodgers and Cincinnati Reds and are now a farm club for the Minnesota Twins.  The Lookouts play at AT&T Field in Chattanooga, a 6,340-seat venue that opened in 2000.  Larry Ward, now in his 28th season as voice of the Lookouts, can be heard calling games on 96.1 The Legend.

Big Mo is an orange beast that loves biscuits.  Monty is a large buttermilk biscuit.  Since 1999, both have been mascots of the Southern League’s Montgomery Biscuits, the AA-affiliate of the Tampa Bay Rays. The team plays in Riverwalk Stadium, which opened in 2004 and is one of the nicest parks in the minor leagues.  A converted old train shed in the heart of one of Alabama’s most charming towns, Riverwalk seats 7,000 fans and sits along the banks of the Alabama River.  It also offers delicious homemade biscuits at all of the park’s concession stands.  The Biscuits moved from Orlando, where they won three Southern League titles as the farm club for the Chicago Cubs and Rays, to Montgomery.  They also won a Southern League crown in 2006, their third season in Montgomery.  Alums include Carl Crawford, Evan Longoria, David Price and B.J. Upton.  The Biscuits also feature a live mascot–a mini pot belly pig named Miss Gravy, the Duchess of Pork.

The Toledo Mud Hens were the favorite team of Corporal Maxwell Klinger, who often wore Mud Hens gear on episodes of M*A*S*H.  The franchise originated in 1896 as the Interstate League’s Swamp Angels.  The ballpark was situated near marshland inhabited by American Coots–also known as Mud Hens—and the local press made the name stick.  The Triple-A affiliate of the Detroit Tigers, located 50 miles up the road, the Mud Hens have played in the International League since 1965.  Big league stars Curtis Granderson, Bobby Mercer, and Max Scherzer have all come through Toledo, which won its first league title in 1927.  Mike Hessman [Daily Dose, 12/18/15]—the top home run hitter in minor league baseball history–led the Mud Hens to back-to-back Governor’s Cups as International League champions in 2005 and 2006.

The Lehigh Valley Iron Pigs are one of the Mud Hens’ chief rivals in the International League.  Based in Allentown–the heart of Pennsylvania steel country–the name is a reference to pig iron, a key component used in steel making.  The franchise—which, at $ 34 million, is the fourth most valuable in minor league baseball—was formerly the Ottawa Lynx, whom relocated to Allentown in 2008.  The Iron Pigs moved into sparkling new 10,000-seat Coca-Cola Park, giving the region its first team since 1960, when the Allentown Red Sox bolted for Johnstown.  The Iron Pigs’ first mascot was Pork Chop, but the name was changed to the more politically-correct-but-boring Ferrous [the chemical name for iron] following complaints from the Puerto Rican community.  The Iron Pigs are the Triple-A affiliate of the Philadelphia Phillies, who play 60 minutes up the road at Citizens Bank Park.

In addition to being the hometown of LeBron James [Daily Dose, 12/30/15] and non-profit czar John Junker, Akron is the capital of the rubber industry.  Birthplace of Firestone, Goodyear, Goodrich and General Tire, Akron has been home to the Double-A affiliate of the Cleveland Indians since 1994.  Canal Park–designed by the same architects who built MLB’s Camden Yards and Progressive Field—opened in 1997 and became home of the Aeros.  In 2013, the Aeros changed their name to the RubberDucks.  The franchise has won five Eastern League titles since 2003 and hosted the All-Star Game in 2016.  Akron is a hotbed for minor league baseball and on a warm summer night in the Midwest, Canal Park is the place to be.  The team mascot, Webster, roams the 7,630-seat venue, which features menu items that include the “Three Dog Night” [hot dog in a bratwurst in a Kielbasa] and the “Nice to Meet You Burger.”  The voice of the RubberDucks is Jim Clark, now in his 25th season calling Double-A baseball for WARF-AM Fox Sports 1350. Akron alums include Manny Ramirez, C.C. Sabathia, and Jason Kipnis.

The Eastern League also includes the Richmond Flying Squirrels, the Double-A affiliate of the San Francisco Giants.  The franchise began as the West Haven Yankees in 1972 and were affiliated with the Yanks and A’s until 2003, when they became part of the San Francisco Giants organization.  Upon relocating from Connecticut to Virginia in 2009, the franchise held a name-the-team contest and Flying Squirrels was chosen over Rock Hoppers, Hambones, Rhinos, Flatheads and Hush Puppies.  The organization has won nine minor league titles since their inception and earned the Northern Division crown in 2014.  The Flying Squirrels play at The Diamond, which is also home to the NCAA’s Virginia Commonwealth Rams.  Nutsy, the team mascot, encourages fans to use acorn dollars [an alternative to cash] to purchase merchandise in the Squirrel’s Nest Team Store.

Today, San Francisco Giants manager Bruce Bochy will be the keynote speaker at the Flying Squirrels annual charity Hot Stove Banquet in Richmond.  Mr. Bochy is the winningest active manager in major league baseball and has guided the Giants to three World Series titles since 2010.