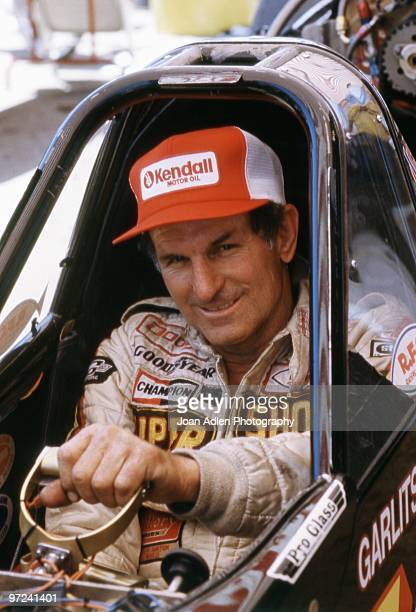 The King of the Dragsters, Garlits has won 144 national events and 17 World Championship titles – his last at 54.  The most notable and innovative driver in drag racing history, he perfected the rear-engine top fuel dragster design that revolutionized the sport.

Garlits won the first organized race he entered — with the first race car he built — at the 1955 NHRA Safety Safari in Lake City, Florida.  Three years later, the garage and body-shop owner was racing professionally.  For the next four decades, Big Daddy lorded over the sport.

“I liked the idea of two cars lined up side by side, not bumping into one another,” Garlits said of drag racing’s appeal to him.  “It was one person against one person, one machine against one machine.  There was a winner and a loser.  It was real simple.”

Born in Tampa on this date in 1932, Donald Glenn Garlits was the son of a former Westinghouse engineer-turned fruit farmer.  When the market went bust, the family had no other option than to live in a toolshed with a dirt floor.  A natural mechanic, Garlits enjoyed tinkering with cars.  After marrying his high school sweetheart, Pat, he opened an auto shop in Tampa.

Following his first win in 1955, Garlits built his first Swamp Rat, which he raced with great success for five years.

Innovative, and with a burning desire to be the best, he poured himself into drag racing.  Over the next six decades, Garlits would introduce 33 more cars in the Swamp Rat series, each hand-fabricated and painted black.

Drag racing’s first big star, Garlits helped grow the sport outside of southern California, where it was rooted.  In 1959, he traveled to Bakersfield to compete in the U.S. Fuel and Gas Championships, later dubbed the March Meet.  Billed as the “East-versus-West” showdown, the event drew 30,000 fans, the largest crowd in drag racing history.  Garlits’ first NHRA national win came in top fuel at the 1963 Winter Nationals in Pomona, California.  Big Daddy went on to claim the NHRA national crown eight times.

In March 1970, Garlits was driving Swamp Rat XIII in an event at Lions Drag Strip in Long Beach, California, when the vehicle exploded, cutting his car in half and taking a portion of his right foot with it.

The 38-year-old Garlits nearly burned to death when the front engine caught fire.  He was rushed to a nearby hospital, where surgeons wanted to amputate his hands.  “I would rather die,” Garlits told the doctors, who informed the patriarch of drag racing that he would have to find another hospital.  So he did – in Florida.  In immense pain, Don and Pat Garlits returned by train to Florida.

While recuperating in the hospital, Garlits came up with the idea for the rear engine dragster, which changed the sport forever.  He returned to Long Beach the following year with Swamp Rat XIV, a new mid-engined, front-cockpit rail.  Despite losing 6.58 to 6.66 to DodeCochran in the final round, the faster, safer rear-engine racer had arrived for good.

Following a blow over crash in 1987, Garlits retired from racing to become a color commentator for NHRA telecasts on TNN and NBC.  In December 1991, he came out of retirement to race in the Snowbird Nationals, but his comeback was short-lived.  Big Daddy retired again in 1992.  Detached retinas in both eyes suffered while competing in Gainesville Raceway  – the result of 4 g force caused by the severe deceleration of parachute stops – compromised his vision.  “It was a terrible, violent stop,” recalled Garlits.  “I pulled the ‘chutes at about 250 [mph] and went 166 through the traps and turned off at the first turn.  That son of a gun stopped on a dime and gave me nine cents in change.”

Don Garlits’ contributions to drag racing are second to none.

Voted the # 1 NHRA driver of all time, he was an early promoter of the full body, fire resistant Nomex driver’s suit.  In 1984, he opened the Don Garlits Museum of Drag Racing on the grounds of his home in Ocala, Florida.  The museum houses over 75 race cars and memorabilia from the early days of drag racing to the present.

Mr. Garlits, who has amassed more than $4 million in race winnings, is still tinkering with cars.  Lean and fit at 87 [he eats right, doesn’t drink or smoke, and rarely watches TV], Big Daddy has a wrench in his hands every day.  In May 2014, the 82-year-old Garlits set a speed record [184 mph] in an EV dragster, a battery-powered vehicle that does not burn fuel.