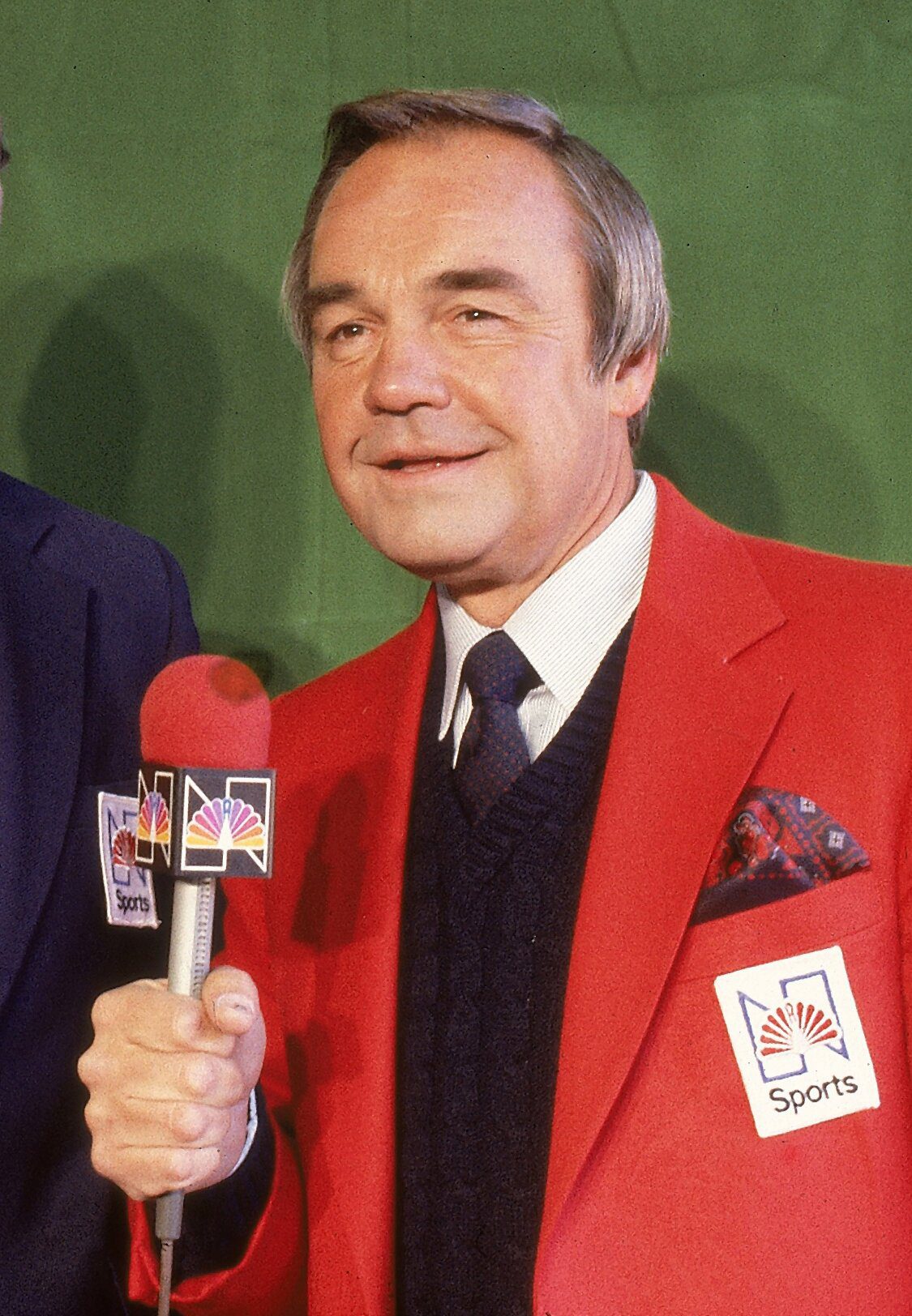 Richard Alan Enberg is one of the most important sports broadcasters of the past half century.

Born January 9, 1935, in Mount Clemens, Michigan, home of musicians Uncle Kracker and Kid Rock, Dick attended Central Michigan University.  Enberg played baseball for the Chippewas, graduating in 1957.  While pursuing his masters and doctorate degrees at Indiana University, he voiced the first radio broadcast of the Little 500 [Daily Dose, June 23], the bicycle race popularized in the Academy Award-nominated film Breaking Away.  Enberg did play-by-play for IU football and basketball before calling his first NCAA basketball tournament event, the championship game between Cincinnati and Ohio State.  After earning his Ph.D from IU in 1961, Enberg moved to California, becoming an assistant professor and baseball coach at San Fernando Valley State College, [now Cal State-Northridge].  In the late 1960s, he began broadcasting full time, covering UCLA basketball, Los Angeles Rams football, California Angels baseball and calling boxing matches from L.A.’s Olympic Auditorium.  After UCLA’s athletics director recommended him, Enberg was assigned to cover college basketball’s “Game of the Century,” a January 1968 matchup between Lew Alcindor’s UCLA Bruins and the Houston Cougars, who were led by Elvin “Big E” Hayes.  It was the first NCAA regular season game broadcast in prime time and paved the way for March Madness television coverage.

Enberg was named California Sportscaster of the Year in 1967, 1968, 1970 and 1973.  From 1971-79, he hosted a Sports Challenge, a syndicated TV game show.  Dick Enberg emerged onto the national stage in 1975, when he joined NBC Sports.  He replaced Curt Gowdy [Daily Dose, July 31] as lead announcer for the NFL, covered MLB, NBA, U.S. Open golf, college football,l and tennis.  In addition, Enberg broadcast horse racing, Olympics and boxing.  Mr. Enberg teamed with Billy Packer and Al McGuire to form one of the best-known trios in college basketball broadcasting history and anchored the Rose Bowl from 1980-89.  He called eight Super Bowls and delivered coverage of Wimbledon and the French Open.  In 2000, Dick Enberg joined CBS, where he called the NFL, golf, college basketball, and tennis.  Enberg had the ability to reflect warmly and poignantly on the sporting events he covered, and Enberg Essays became a regular feature of college basketball’s Final Four.  In 2004, he joined ESPN, where he broadcast tennis until 2011.  Enberg returned to baseball in 2009, becoming the voice of the Padres in his hometown of San Diego.  The 2016 season will be his last with the Friars, as Enberg has announced his retirement effective the end of this MLB season.

Richard Alan Enberg was one of the great broadcasters of the “Living Room Era,” from the mid-1950s to mid-1980s.  He has covered eight Super Bowls and has worked for NBC, CBS and ESPN.  Mr. Enberg’s catch phrases include, “Touch ‘em all!” following home runs and “Oh, my!” punctuates exciting or outstandingly athletic plays.  He has won 13 Sports Emmys, a Lifetime Achievement Emmy and has a star on the Hollywood Walk of Fame.  Dick Enberg is the only sportscaster to win Emmys in three categories [broadcasting, writing, producing] and wrote a one-man theatrical play titled COACH as a tribute to his former television broadcast partner and late friend, Al McGuire, who coached Marquette to the 1977 NCAA basketball title.  Mr. Enberg has been inducted into the Indiana University Athletics, Rose Bowl and Central Michigan University Halls of Fame.  In 2015, the National Baseball Hall of Fame and Museum named Enberg the recipient of the Ford C. Frick Award for excellence in baseball broadcasting.