Rick Mount was the first schoolboy athlete to grace the cover of Sports Illustrated, in 1966, the same year he was named Indiana Mr. Basketball.

Arguably the best shooter in college basketball history and certainly the best shooter in Indiana high school basketball history, Mount was a legend in the Heartland.  In the most basketball of basketball states, Mount was the Chosen One before LeBron was even born.  A child prodigy, he made varsity at Lebanon High School as a freshman, and suddenly 2,200-seat Memory Hall became the hottest spot in central Indiana.   Mount created a buzz wherever he played.  In 1965, Lebanon played Crawfordsville at a sold-out Hinkle Fieldhouse, home of the Butler University Bulldogs.  With 10,000 fans in attendance, Mount scored 57 points and Lebanon made enough money to buy a new school bus.

A deadeye Midwestern jump shooter straight out of central casting, Mount was Jimmy Chitwood long before Hoosiers.  A 6’4” guard — with good ups and a quick release — Mount was a basketball junkie.  A tireless worker, he honed his craft shooting thousands of shots every day at the outdoor courts at Memorial Park.  As a high schooler, Mount scored 2,595 points, the second most in Indiana history at the time and a staggering 770 more than Oscar Robertson had scored in his three seasons at Indianapolis Crispus Attucks in the mid-1950s.  Named 1966 National High School Player of the Year after averaging 33.1 points per game in his last two years at Lebanon, Mount appeared on the cover of SI on Valentine’s Day of his senior year.

Eager to land one of the top prep players in history, college coaches descended on Lebanon [pop. 9,500], a farm town 25 miles northwest of Indianapolis.  Mount chose Purdue over Indiana and Miami of Ohio, joining the same college class [1970] as LSU’s Pete Maravich and Calvin Murphy of Niagara.  The trio – dubbed The Three M’s — became consensus All-Americans in both 1969 and 1970.  “Rick, by far, was the greatest pure shooter I ever saw,” said George King, Mount’s coach at Purdue and later the school’s athletic director.

Unable to play on the varsity team due to NCAA regulations then in effect, Mount scored 33 points in a scrimmage against the varsity in front of 9,500 rabid Boilermaker fans.  As a frosh, The Rocket averaged 35 points a game while shooting better than 50 percent from the floor.

Mount’s varsity debut was one of the most-anticipated in school history.  It also happened to be the opening night of Mackey Arena against defending champion UCLA.  Playing with a broken right foot, Mount outscored Bruins star Lew Alcindor, 28-19, but UCLA won 73-71 on a last-second shot.  He averaged 28.4 points a game, was named first team All-Big Ten and second team All-American, and led the Boilers to a 15-9 mark.  Following the U.S. Olympic Trials in April, he was selected as an alternate to the 1968 U.S. Olympic team.

In his junior season, Purdue went 23-5 and won the Big Ten title for the first time since 1940.  Mount led the Boilermakers to the school’s first NCAA tournament appearance, where his game-winning shot against Marquette sent Purdue to the Final Four.  After drubbing North Carolina by 27 in the national semifinal, Purdue earned a spot in the title game against UCLA.  The Bruins were coached by John Wooden, who had been an All-American guard for the Boilermakers from 1928 to 1932.  Prior to the game, Mount – who had a keen shooting eye — twice had officials at Louisville’s Freedom Hall adjust an unbalanced rim.  Despite 28 points from Mount, UCLA won 92-72 to claim its fifth title in six years.

As the only returning starter for the 1969-70 season, Mount carried Purdue to an 18-6 record.  That season, he had two 53-point games and poured in a school-record 61 against Iowa.  Mount averaged 35.4 points per game as a senior.

If Ted Williams is the greatest hitter that ever lived, then Richard Carl Mount may very well be the best shooter.  Mount would lead the Big Ten in scoring in all three of his varsity seasons and was named First Team All-Big Ten three times.  A two-time consensus All-American, he was named to the 1969 NCAA All-Tournament team, and finished second to Alcindor and Maravich, respectively, for college player of the year as a junior and senior.

The first overall pick of the Indiana Pacers in the 1970 ABA draft, Mount was also taken by the Los Angeles Lakers with the 132nd overall selection of the NBA draft.  He played five pro seasons – all in the ABA – and won a title with the Pacers in 1972.  In 283 games as a pro, Mount averaged 11.8 points and 2.4 assists per contest, and was an 82 percent career free-throw shooter.  But he had trouble defending and getting his shot off, and his career was cut short due to a dislocated shoulder suffered during the 1974-75 season.

Mr. Mount left Purdue holding 20 records, including the career scoring mark of 2,323 points in just three seasons.  A two-time winner of the Silver Basketball as the Big Ten Player of the Year, Mount averaged 32.3 points per game as a Boilermaker.  He joined his father, Pete, in the Indiana Basketball Hall of Fame in 1992, and his number 10 jersey hangs from the rafters of Mackey Arena.  The Rocket was inducted into the Purdue Athletics Hall of Fame as part of the inaugural class in 1994, and was elected to the College Basketball Hall of Fame in 2017.

On this date in 1970, Rick Mount scored a school-record 61 points against Iowa before 14,123 fans at Mackey Arena.  Had the three-point line been in effect [it was not introduced in college basketball until 1986], the Purdue senior would have scored 74.  Despite Mount’s efforts, Iowa won the game 108-107 to secure the Big Ten title.  The Hawkeyes would finish 20-5 [14-0 in the Big Ten] and advance to the NCAA tournament, where they lost to Notre Dame in the Sweet 16. 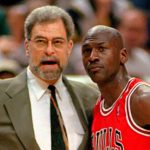 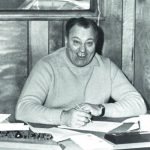 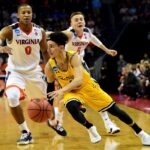