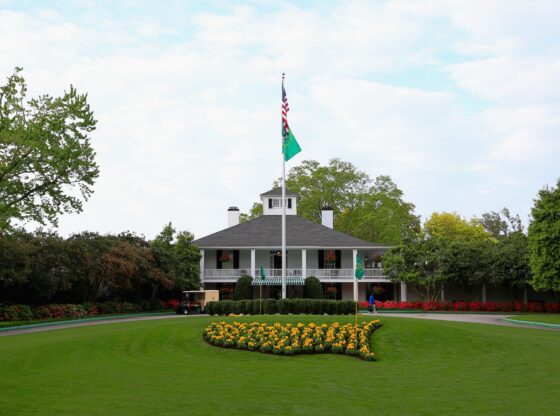 The 83rd Masters Tournament gets underway this Thursday from the Augusta National Golf Club in Augusta, Georgia.

More than any other sporting event in America, the Masters is about tradition.  First held in 1934 – when it was played as the Augusta National Invitational – the esteemed championship has become a revered ritual of springtime.

Played at perhaps the most iconic golf course in the land, the Masters is as much spiritual experience as golf tournament.  It transcends golf and its traditions are unrivaled in sports.  Here are our favorite Masters traditions.

“The walk down Magnolia Lane still gives me goosebumps.” – Gary Player, who has played in a record 52 Masters.

Magnolia Lane is a 330-yard long tree-lined road that serves as the entrance to the Augusta National Golf Club.

First paved in 1947, the road ends in a roundabout in front of the clubhouse.

Famous for its canopy of 61 Magnolia trees that line each side of the drive, the branches meet overhead.  The tunnel-effect is especially stunning when the trees are in bloom.  The grassy area within the roundabout is Founder’s Circle.  A favorite photo spot, the circle contains a flower bed of yellow pansies shaped like the Masters logo – a map of the United States with a flagpole mounted on Augusta.

Same time, same place, every year.  The Masters always takes place on the first full weekend of April.  The scheduling dates to the inaugural event in 1934.  In an effort to get the media on board, Masters organizers convinced baseball writers heading north at the end of spring training in Florida to make a stop in Augusta.  The idea worked and the Masters became the marquee event in golf.   It is the only major tournament of the season that’s played on the same course every year, providing a familiarity and passion among players and fans that is unrivaled.

Playing at Augusta is like playing golf in a nursery…or heaven.

The Masters was co-founded by Bobby Jones, the greatest amateur ever to grip a golf club.  The event pays homage to amateur players.  Several of the world’s best compete at Augusta, where the Masters field includes winners of the U.S. Amateur, British Amateur, U.S. Mid-Am, and the Latin-America and Asia-Pacific events.  Amateur players are invited to stay on the grounds in the famous Crow’s Nest, a 1,200 square-foot loft above the Champion’s Locker Room.  At the end of the week, the low amateur is awarded the Silver Cup.  Past recipients include Jack Nicklaus [1960], Ben Crenshaw [1972, ‘73], Phil Mickelson [1991] and Tiger Woods [1995].

Caddies in white.  For several decades, Masters contestants weren’t even allowed to use their own caddies, they had to use those employed by Augusta National Golf Club.  In 1983, the club lifted the rule and allowed players to use their own looper.  Masters caddies must be outfitted in the required attire –  a green ballcap, and an all-white jump suit with their player’s name emblazoned across the back.

The ceremonial opening tee shot is a one-of-a-kind Masters tradition.

It signals the beginning of not only the Masters, but also the year’s quartet of majors.  Held on the first tee early Thursday morning, this magical moment offers golf fans the rare opportunity to see the game’s legends tee it up on the very ground they once ruled.  Not just symbolic, it’s historic.  First done in 1963, when Jock Hutchinson and Fred McCloud became the honorary starters, ceremonial tee shots have been launched by Masters legends.  Ken Venturi, Gene Sarazen and Sam Snead have served.  Arnold Palmer handled the honor from 2007 to 2015.  This Thursday morning, Jack Nicklaus and Gary Player will open the 2019 Masters with ceremonial tee shots.

Perfect!  And to think this ground has been lying here all these years waiting for someone to come along and lay a golf course upon it.

The hallowed grounds of Augusta.  Rae’s Creek cuts across the corner of the property, flowing behind the 11th green.  It fronts the green of par-three 12th, and a tributary snakes alongside the 13th fairway before crossing in front of the green.  The Hogan Bridge is a stone footbridge topped with artificial turf that takes players across Rae’s Creek to the 12th green.  It was named after Ben Hogan, winner of the 1953 Masters with a then-record score of 274.

The Nelson Bridge commemorates Byron Nelson’s come-from-behind win in 1937, where he made up six strokes on Holes 12 and 13.  Dedicated on the same day as the Hogan Bridge in 1958, the stone structure takes golfers across Rae’s Creek as they leave the 13th tee and head up the fairway.  The Sarazen Bridge crosses the edge of the pond that fronts the 15th green.  While the other two are arched, the Sarazen Bridge is a flat walkway directly below the grandstands at 15.  Dedicated in 1955 on the 20th anniversary of Gene Sarazen’s famous “Shot Heard ‘Round the World,” the double-eagle he recorded at 15 en route to victory at the 1935 Masters.

Take all living past Masters champions, put them at the same table in the clubhouse dining room, let the defending champion choose the menu, and you have a recipe for one of the Masters’ most enduring traditions.  First hosted by Hogan in 1952, this Tuesday tradition is one of the most-anticipated meals in the sports world.  Tiger Woods served cheeseburgers and milkshakes following his first victory, while Sandy Lyle served traditional Scottish Haggis in 1989.  One of the coolest evenings in golf, the champion’s dinner serves as a time for some of the game’s greatest players to honor and enjoy one another and the magnificent traditions of the Masters.

The winner of this tournament doesn’t just win a major, he becomes part of the history of the game.

The green jacket that is awarded to the Masters champion is arguably the most coveted prize in all of sports.  First presented to Sam Snead in 1949, the green jacket is the one Masters tradition without which the Masters couldn’t exist.  The previous year’s winner gives the jacket to the tournament champion in a ceremony on the 18th green [and in Butler Cabin for television viewers].  Players get to keep their jacket for a year, then they return it to the club, where the Pantone 342-colored coat is stored for the player to wear only at events on the grounds of Augusta National.  Following his lone Masters victory in April 2017, Sergio Garcia wore the green jacket to his wedding reception as well as Wimbledon later that summer.  The green jacket is the best tradition at the most tradition-rich event in sports.

The Masters is the greatest event in golf – truly a Tradition Unlike Any Other.

Bill Buckner
The Raiders are threatening to leave Oakland.  A Travesty